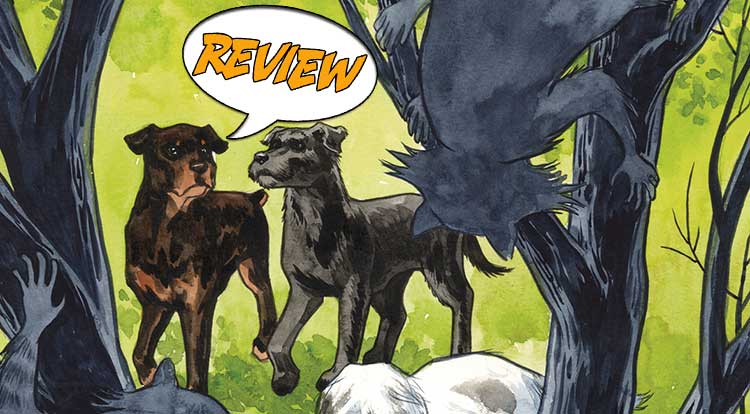 Trapped and without their magic, the Wise Dogs are up against dozens of cultists and their creatures. Can the Dogs thwart their nefarious plans? Previously in Beasts of Burden: Wise Dogs and Eldritch Men: Tommy, the farm dog tells the Wise Dogs about the warlock camp and that the farmers were raising lurkers for them. He also knows that they are trying to awaken some monster in the old mine. He is eager to help them, and offers to show them how to get to the camp and avoid traps. They do make their way to the camp, but Tommy is a traitor – he can shapeshift into a dog. However, as good as he is, Emrys and Lundy figured him out and planned accordingly. The warlocks make themselves known, and the Wise Dogs find themselves cut off from their own magic, facing down dozens of warlocks!

As Beasts of Burden: Wise Dogs and Eldritch Men #4 opens, we see just how big the warlock camp actually is, and how well armed they are. Things do not seem promising for Lundy, Emrys, and Carver. As they’re escorted through camp, people call out, making fun of Tommy for having been a dog, and then calling out, “Woof! Woof!” to the Wise Dogs. They go to the mouth of a mine that has an obelisk in front of it. One of the warlocks, Tate, asks about the dog who got away. Tommy does not think she’s a threat. Then we’re introduced to the “old man,” who knows about Wise Dogs, and has even killed one. At this point, Lundy speaks up, much to the delight of Tate. He’s mad at the dogs – he wanted the salamander that Lundy set free in the first issue. But he’s still happy, as they have a human for sacrifice.

Lundy and Emrys admit that they knew what they were walking into, and they knew Tommy was an impostor. Emrys also admits that their rune-work is more difficult than he had anticipated. The old man tells him they’re a band of several traditions who’ve joined and become the Brotherhood of the Red Serpent. The obelisk is their focus. They’ve discovered a thing called a blood lure which is attracting spirits and weird creatures. They plan to claim the blood lure and grow the Brotherhood. The old man has had visions of the dead eager to rise, and they start their ritual and prepare to sacrifice the farmer, whom they consider a traitor.

The Wise Dogs wait until things are underway, and then howl. A fireball comes flying through camp, crashing into the obelisk, knocking it over and setting the camp ablaze. Miranda has rejoined them, accompanied by the salamander. (This was a grand entrance!) Salamanders are elementals; the warlocks’ totem magic could not suppress it. Meanwhile, the Dogs are in a protective bubble which holds off the bullets fired at them. But then there is a terrible sound.

The beast in the mine has awakened! Tate is beside himself with triumph when the beast reaches out a spined tentacle and impales him. It starts lashing out, killing everyone around it. Some of the cultists panic; some shoot at the monster; some of them shoot at the Wise Dogs. But their wards have been broken; Emrys can use his magic again. And the charmingly cantankerous Lundy takes issue because not only is the monster just that (and not some sort of demi-god), it isn’t even red. Emrys points out that they, by calling upon the salamander, inadvertently set it free by destroying the obelisk. They need to destroy it.

They come up with a potentially suicidal plan and then argue about who carries it out. Lundy is the only one with a protective field, but Carver points out that, well, he has short legs (Scottie, you know). Emrys climbs up to where Miranda and the salamander are to fill them in. Carver, with Lundy on his back, races up to the monster to get it to chase them. They lead it a little ways out of camp to where Tommy had told them was an ammunition dump, and the salamander lets loose another fireball to set it off just at the right time. (Talk about an explosive finale!)

Then there are just the loose ends. Carver and Lundy are injured – not dead. The salamander helped them get rid of some of the last of the smaller monsters. And then there is Tommy – he turned back into a dog to get away, but his collar was torn off. He has no way to turn human again, and he doesn’t know what to do. Lundy advises him to be a good dog. Lundy also admits to having kept in touch with the salamander, who was grateful to him for saving him, and wanted to do something in return. Still, they don’t know what the monster in the mine was, or what a blood lure is, so there’s a potential hook for more.

I love the art in Beasts of Burden: Wise Dogs and Eldritch Men #4. The colors are somewhat muted, but they just fit. The colors of the hills and fields, even the muddy grounds of the survivalist camp, look natural. The camp is interesting and a little horrifying. There are skulls and bones set about – probably as part of their totem magic. And there are small monstrous creatures, and a few of the large boars mixed in with the many cultists. As a nice touch, the cultists are all dressed in red and black – not the same outfits, but the same color scheme (which is one of my favorites).

But what really is fantastic are the close up shots of the various characters. The dogs are wonderful – they look like dogs, but they have attitude, and they are compelling. The old man looks wild-eyed and what’s more is that’s he has one of the raccoon creatures with a human face, which we saw previously, sitting on his shoulder. Even worse, it has his face. This is utterly creepy and terrifying, especially when they both have the same maniacal expression.

The explosion, fire, and overall depiction the salamander are also terrific. The color palette doesn’t have yellows and oranges in it, until everything is set on fire. The salamander seems to have a bit of a grin, which is great. The story also closes with a look at what the salamander is doing now, and it is just delightful.

BOTTOM LINE: A FITTING CLOSE TO AN EXCITING STORY