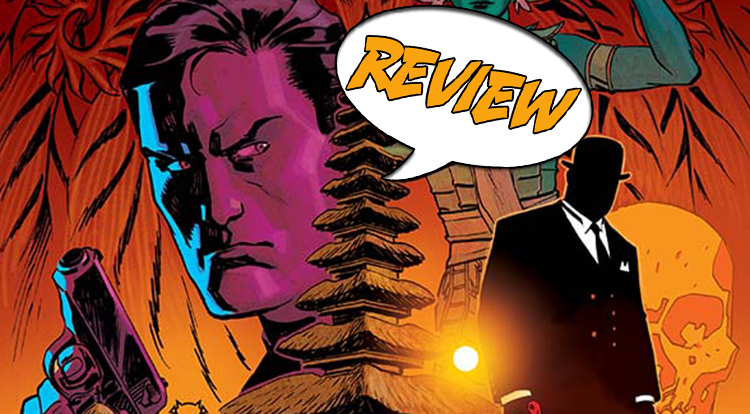 A martini, shaken, not stirred. The tuxedo. The gadgets. The cars. The women. The Walther PPK. The introduction, Bond, James Bond. These are all the iconic trappings of the man with the license to kill. You know the books; you know the movie; now know the comics. Dynamite Entertainment brings the continuing adventures of 007 with the second issue of James Bond, on shelves December 19th, 2018. Previously in JAMES BOND: Agent James Bond, alias 007, is assigned a mission to go to Singapore and retrieve a mysterious case from a courier. The courier is trying to deliver the case to one of the most deadly terrorist in the world. On his first attempt, Bond failed. Now he gets a second chance.

A VIEW TO A PAGE

After failing in his mission to take the mysterious briefcase from the Russian courier, James Bond, M, and Moneypenny meet with Agent Edmundson. What does that have to do with the price of tea in China, you ask? It seems thirty-years ago, Edmundson was on a surveillance mission when he was attacked by a large Korean man with hands like solid steel. The encounter went poorly for Edmondson and the attacker, identified as Oddjob, broke his back, crippling him. He was lucky, five other agents, they lost their lives. It is important to Bond’s current mission because, after analysis of the fight from the prior issue, the man uses the same moves as the assassin Oddjob, but is of a smaller frame. Despite a desire to avenge his defeat and Edmondson’s crippled condition, M orders Bond to focus on his mission, to kill the Russian, get the case, and not be killed himself. A quick trip to the Armourer and Bond is ready for round two.

Indonesia. Bond has picked the trail back up on the Russian and is lying in wait to complete his mission, but there is a catch. The young man with moves like Oddjob is there as well, clearly intent on the same target. They meet, and introductions are made over semi-cloaked threats of violence. The opposing agent, John Lee, tells Bond his mission is to interrogate the Russian, and he can’t do that if Bond kills the target. Besides, the case is booby-trapped. If the courier’s heart stops, the case explodes, and the size of the resulting explosion is unknown. Before M can verify the information, the Russian’s escort, a beautiful and tattooed oriental woman, spots the agents, and take action to protect her client. Bullets fly while Bond kicks into 00 agent mode. Will he get his target, or will he come up short again.

THE PANEL IS NOT ENOUGH

James Bond has had a storied history of comic book adaptations, starting with the Classics Illustrated adaptation of Dr. No, later republished by DC Comics as Showcase #43 and continuing thorough publishers such as Marvel Comics, Eclipse, Topps, and even Dark Horse Comics. Dynamite Entertainment is the first, which I have been able to ascertain, North American publishing house to give the super spy his own ongoing series, and what a series it is.

Writer Greg Pak (Incredible Hercules, Action Comics) is the latest to take on the man with the license to kill, and he does an admirable job of it. The mission looks simple: kill the courier, steal the case, get the case to his superiors, and settle down for a couple of blondes and a martini. Characterization wise, this is classic Bond, call, cool, slightly sarcastic and confident he can take on anything that the world can throw at him. It is also very much an Act Two Bond, all business, and not a lot of character development, focused on his mission with a laser like intensity. The introduction of John Lee, if that is his real name, is an interesting nod to the tradition of Bond going up against an opposite number, and I hope he has some more screen time and development; he seems to be very near Bond’s match.

The artwork by Marc Laming (Kings Watch, Splinter Cell: Echoes) does an excellent job of bringing a handsome, slightly rakish Bond to life on the page. He has a very good hand for detail, and the backgrounds are filled with little touches that bring them to life and solidify the visuals in the foreground, allowing you to throw yourself in the story. That said, it is also a very middle of the road and safe. There are no extreme panel designs, no intricate and dramatic angles. It takes its cue very much from the movies and various camera techniques. My favorite sequence is when Bond is in Indonesia and preparing for his day, and we see a mirror sequence of John Lee doing almost the same thing, just with a slightly different flair. Very good work, and a good visual to relay the near equality of the two men.

Last thing: Dave Johnson’s (100 Bullets, Detective Comics) cover is exquisite. I have been a fan of his since I first saw his work on the covers for 100 Bullets. His bold use of color and cinema quality design work add to the majesty that is a James Bond book. Extremely eye-catching and beautiful.

BOTTOM LINE: FOR EVERYONES EYES ONLY

James Bond 007 #2 very much has a cinematic feel to it, as it has every right to. It is part of an exciting storyline that mirrors the paperback adventures of Bond, and makes you comfortable with the details you know and receptive to what you do not. I myself have a large collection of the 1960’s era Signet novels, and this fully has a similar feel to those originals as penned by Ian Fleming.  It is all together a solid, entertaining book. Maybe it isn’t 2006 Casino Royale quality, yet, but it sure as hell is leaps and bounds above 1967 Casino Royale.

James Bond 007 #2 very much has a cinematic feel to it, as it has every right to. It is part of an exciting storyline that mirrors the paperback adventures of Bond, and makes you comfortable with the details you know and receptive to what you do not. I myself have a large collection of the 1960’s era Signet novels, and this fully has a similar feel to those originals as penned by Ian Fleming. It is all together a solid, entertaining book. Maybe it isn’t 2006 Casino Royale quality, yet, but it sure as hell is leaps and bounds above 1967 Casino Royale.