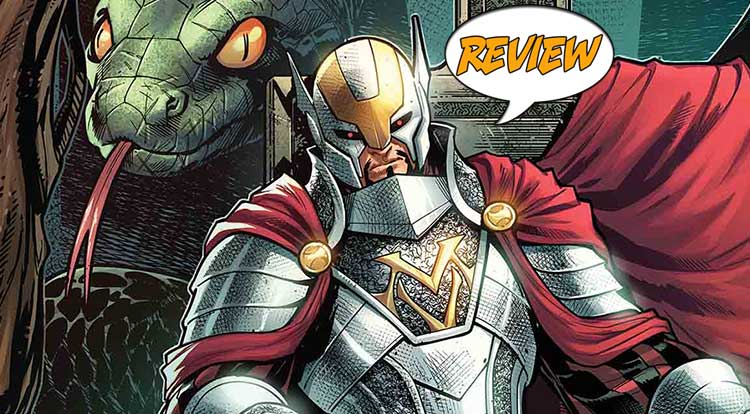 Can The Champions overcome their own members to save two worlds?  Roll for initiative!  Your Major Spoilers review of Champions #27 awaits! Previously in Champions:  The Champions’ mystic quest through Weirdworld comes to an end…

Transported to the Weirdworld and transformed into strange, fantasy-trope versions of themselves (Ms. Marvel a wizard, Spider-Man a rogue, Viv as a golem, Ironheart as a paladin, Snowguard as a shape-shifter and Brawn as an orc with a hammer, which I’m taking as a personal shout-out), the Champions have to face down two of their own in the Wasp and the former Nova, both now empowered by Eshu, aka The Master of the World.  Also on their side is Crystar The Crystal Warrior, a one-time Marvel solo star, who gets hacked to bits by Sam in his new form as the Nova Knight.  Their battle rages on, but things take a turn when Ironheart calls Nova “Sam”, returning him a bit of his memory.  Unfortunately, the loss of his Nova powers has made Sam more susceptible to mind control, and its up to his friends to convince him that he still has a purpose, even without his alien helmet and gravimetric abilities.  when he finally agrees to give up his fantasy world, things return to normal.  The Champions make their way home with Man-Thing and Ms. Marvel takes the opportunity to introduce her team to pen-and-paper fantasy RPG, Mansions and Manticores.

Also, Ultron seems to have taken over Viv’s dog, Sparky.

This issue has a lot of fun moments in it, but my favorite are the character bits: Snowguard begging Amadeus “Brawn” Cho not to grow his hair out, Riri “Ironheart” Williams pulling Sam out of his funk, even the awkward kiss between a couple of the last Champions that you might have expected.  This issue’s art is pretty phenomenal as well, combining bits of D&D and Warcraft into the existing designs and identities, and the revamps are so cool that Miles Morales wishes he had kept his spider-cloak.  I also like the combat sequences, effortlessly making three-dimensional super-combat exciting and easy to follow.  Dunbar also has great facial expressions, like the sheer joy on Ms. Marvel’s face when she realizes she can teach her friends to game, or Sam’s realization that his friends still support him even without his powers.  I also appreciate the characters taking the time to apologize for “murdering” Crystar, only to be assured that he’s okay.  The 80s kid in me who loves all the old-school Marvel toy tie-ins appreciates that respect.

Champions #27 is a respectful take on the combination of RPG and comics tropes (which only makes sense from the man who wrote ‘Skullkickers’ and D&D comics), transforming our heroes in fun ways and continually adding drama in the old-school Marvel manner, with solid art and a really shocking cliffhanger bit, earning 4 out of 5 stars overall.  I am glad that these young Marvel heroes have a book that keeps them them in play even after their solo books/legacy gigs have ended.

A fun adventure comes to a close, and the only real downside being that the book relaunches with yet ANOTHER number one next time around... There are worse things to complain out.