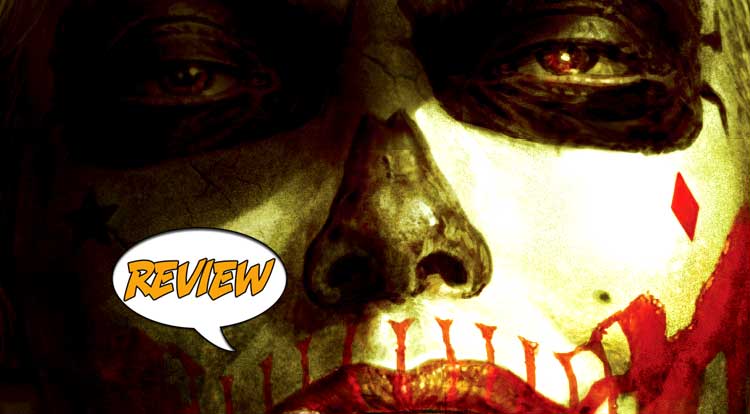 The Batman is going mad…  Can even a Demon restore his mind?  Your Major Spoilers review of Batman: Damned #2 awaits! Previously in Batman: Damned:   As Batman’s descent into the madness of Gotham City’s decadent underbelly continues, he must try to exorcise some of his demons… and who better to help than the Demon, Etrigan himself.  And where there’s demons, there’s also a Deadman, a Spectre, an Enchantress and a host of other supernatural friends and foes…  it’s a veritable Grand Guignol!

There was also… um…  Bat-nudity.

I have to say, the opening sequence of this book is clever and really beautiful, a slow zoom in on a caped, shadowy figure on the parapet of a building…  Then, a cigarette blazes to life, and we see it’s not Bruce Wayne in a cape, but John Constantine in his traditional trench-coat, advising Batman about the recent death of the Joker.  Batman doesn’t believe for a second that the Clown Prince of Crime is dead, and the search takes them to one Jason Blood.  Or, as he’s known the club-goers at The Cavern, rapper J. Blood, who always spits the best rhymes.  (The presentation of Blood’s set and the club are deeply uncomfortable for me in terms of race and stereotypical presentations, sadly.)  The Batman/Blood confrontation goes poorly, as Batman attacks, only to find literally dozens of guns aimed at him, with only Deadman on his side.  A sudden explosion empties the club, only for Batman to find a firebombed building and a desecrated Bat-signal, broadcasting a huge red-lipped smile across the city.  Batman and a possessed club-goer/Deadman enter the burning building, where Deadman becomes distracted by the pain of his host burning to death, while Bats confronts someone who may be The Spectre.  Batman nearly dies, only surviving thanks to J. Blood, and immediately launches himself into the task of finding The Joker, but what he finds is much crueler.

Man, this issue is dark.  Batman’s confrontation ends up not being with The Joker at all, but a maddened Harley Quinn who brutalizes him with a baseball bat, injects him with unknown drugs and prepares to sexually assault him…  That’s not the worst part of the story, though, as the book ends with our hero strangling her to death on the Bat-signal, with overt sexual overtones that make my skin crawl.  It’s a really mean-spirited story, one that doesn’t so much explore madness as it does layer horror upon horror, as if running through a checklist of things that you’re not allowed to do in traditional comics.  Batman: Damned #2 is intercut with flashbacks to his youth at Wayne Manor, showing us his parents fighting, Martha hiring a detective to discover if Thomas is being unfaithful (with a clear indication that he is) and baby Bruce angrily putting a toy gun to Mommy’s head in anger.  That’s the point that I expected to be the low part of the issue for me, but the last few pages amp up the violence and darkness in ways that I found too disturbing to enjoy the really lovely art.  Bermejo’s visuals are gorgeous throughout the book, and even the terrible details (like Harley undoing her suit to reveal that she has autopsy scars and stitches on her chest) or the details of Batman’s uniform texture are fascinating to look at.  The attention to detail is actually the major problem with the book, as Constantine and all the normal human beings look almost photo-realistic, making the appearance of a hulking Batman among them stand out as a little bit ludicrous.  There’s also the matter of the coloring being REALLY intense and over-worked, especially the garish oranges of the fire sequence, which actually obscure some of the details of the art.

When you’re reviewing anything, it’s important to understand that taste is subjective.  My appreciation of Adam West’s formal, goofy Batman is not universal, and I’m well aware the character is elastic enough to support even a take that I don’t enjoy.  There are grimdark Batman stories that I enjoyed, even as I though they were just too focused on “DARKNESS!  NOOO PAAAREEENTS!” factor.  The darkness in Batman: Damned #2 is different, somehow, feeling unmotivated in its violence and madness and reveling in f-bombs, immolation, preparations for matricide and rape without feeling like it’s making a larger point with the terrible moments, making a distasteful reading experience that even the beautiful art can’t overcome, earning 2.5 out of 5 stars overall.  There have been a lot of fully-painted, deluxe format Batman titles in the last 30 years, and it’s my belief that if this book hadn’t debuted with the debacle of Batman’s exposed genitalia, this one would be as forgotten as ‘Batman: Trail Of The Gun’ or ‘Batman: Digital Justice.’

A mean-spirited, unrelentingly dark book, loving crafted to show us the worst of humanity... Not my speed at all, but it's beautifully painted.