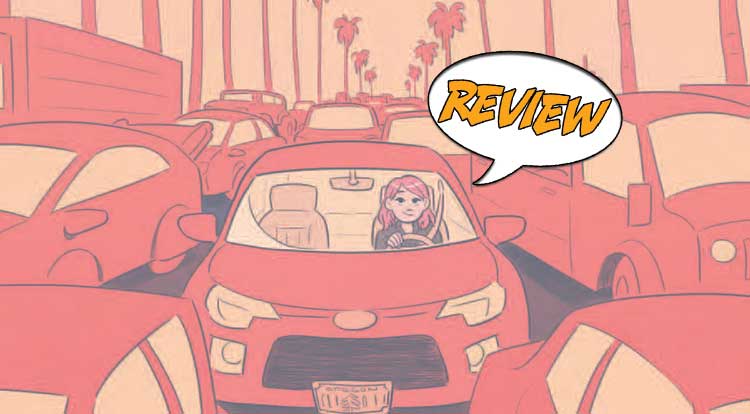 I Moved to Los Angeles to Work in Animation Review

Natalie Nourigat had a dream of working in animation and she pursued it, but did she catch it? Find out in I MOVED TO LOS ANGELES TO WORK IN ANIMATION, an original graphic novel on shelves now from BOOM! Studios. I MOVED TO LOS ANGELES TO WORK IN ANIMATION REVIEW

Previously in I MOVED TO LOS ANGELES TO WORK IN ANIMATION: A dream is something that many people pursue but not everyone achieves. Family obligations, lack of resources, fear, whatever the reason, everyone knows someone who did not follow through with their dreams and always wondered, what if? Natalie Nourigat does not have to wonder, she followed her dream. Now she shares her story in this original graphic novel.

A DREAM IS A WISH YOUR HEART MAKES…

In 2014, young Natalie Nourigat (Tally Marks, It Girl! and the Atomics) was trying to make a major life decision. Leading up to that, she was a native of Portland, Oregon looking at going to school and getting a traditional job or going to art school. An artist at heart, she had planned to go to a university and study Japanese and business, intending to Japan, teach English, and work on comics at night. She had already been able to make a living drawing and had become friends with a group of freelancers who gave her tips on making money by working on storyboards for commercials. With age came concerns of issues like a regular paycheck and insurance. Many of her friends, artist and cartoonist like herself, moved to Los Angeles to work in the animation field, and the idea was something that she herself began to consider seriously. A friend offered to let her stay with her for a few days and show her the town and how life as a cartoonist was for her. During the visit, she made the decision; she was going to get a job at an animation studio and move to Los Angeles. Easy, right?

I MOVED TO LOS ANGELAS TO WORK IN ANIMATION is a different kind of book. It is one part autobiographical, one part guide, and one part hard truth. Nourigat spends time discussing how she began her search for a position at a studio, providing the reader with details about what sort of obstacles she faced, the new terms she learned, and her emotions as she spent over a year of searching for that elusive studio position. She also goes into how she finally was offered, and accepted a position. She tells the reader about the hardships she faced with a difficult move, finding housing, and just readjusting to life far away from home.  The book is broken up into multiple sections, or chapters, each with a definitive purpose. The Introduction, Getting A Job, Moving, Perks of Working in Animation Guild Studios, A Day in the Life, Best Things About Living in L.A., A Few Things to Keep in Mind, How To Break In, Other FAQ, Conclusion and Alternate P.O.V.s. Each one is fun, entertaining and full of information most people may not consider, but the Other FAQ and Alternate P.O.V.s are especially entertaining.

The Other F.A.Q. section discusses such things as the smog, the heat, where to get exposure to nature, possible job progression, the people, etc. It sounds boring, but it is not. Like the rest of the book, Nourigat successfully balances the information with the entertainment. Many of the Frequently Asked Questions are things I would have never thought about considering. Although I enjoyed the entire book, I found the Alternate P.O.V. section was an interesting comparison to Natalie’s story. Here she gives “interviews” with storyboard artist and designers such as Angie Wang (Steven Universe), Antoine Ettori (Sing 2), Dave Pimentel (Darkmouth), Diana Huh (She-Ra), Drew Green (Craig of the Creek), Kellye Purdue (Infinity Train), Megan Nairn (12Field Animation) and Sam Spina (Infinity Train). Each of them gives an abbreviated version of their own stories, some of their own struggles, and some of their own rewards.

BOTTOM LINE: A WONDERFULLY TOLD, NONTRADITIONAL LOOK AT ONE PERSON’S HUNT FOR HAPPINESS

This is a book that everyone who has ever had a dream should read. Nourigat has a whimsical art style that fits her conversational style expertly. When you are reading you quickly gather that she has a casual, conversational style that almost makes it feel as if she is sitting in front of you telling her story. It really felt at times as if I was sitting across a table enjoying a cup of coffee and listening to her tell her tale. The artwork brings the words to life and as you read it you begin to realize how much you are rooting for her success. I was a little leery when I first saw the book, but after reading it I realized how much I enjoyed it. There are a few little hitches, mainly to do with the chronology of her pre-animator/storyboard artist life, but you do not really notice them until something is clarified later in the book. It was a little thing that took nothing away from my enjoyment of the story.

I Moved to Los Angeles to Work in Animation

I MOVED TO LOS ANGELES TO WORK IN ANIMATION is a great and rewarding story that serves as an example of what can happen when you follow your dreams.