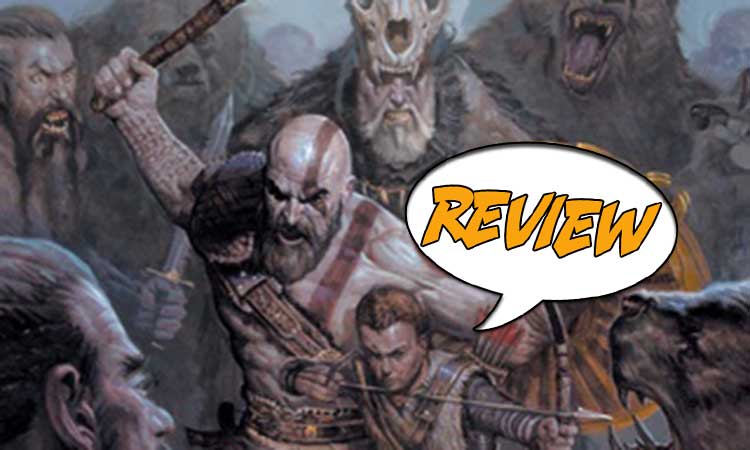 Kratos, the God of War, has found a new home for himself in the frozen wilderness of the North, far from the machinations of the Greek Gods, and a chance to tame his savage nature.  But when wild beast men menace his family, Kratos must act to save himself, and his son, in God of War #2. Previously in GOD OF WAR:  Making the leap from video game franchise to the lush pages of Dark Horse Comics, Kratos the Godkiller must deal with more mundane matters, namely his wayward son, in the inhospitable icy wastes of the North.  But when savage beast-men threaten his family, Kratos must master his rage and channel it into saving himself, and his son…

FIGHTING FOR THE GOD OF WAR

God of War #2 opens with a savage battle between Kratos and a pair of huge beast men, while his son, Atreus, cowers on the sidelines.  This battle, and Atreus’ ineffectuality is at the heart of the relationship between an unlikely father and his son.  Defending his family is second nature to Kratos, but understanding his son, who is not a natural warrior, presents a greater problem for the God Killer.

The other element in this issue is Kratos’ battle with himself.  Kratos knows only one response to being attacked – to come out swinging and no stop until the threat is dealt with once and for all.  But how is he to deal with his own rage when it threatens to erupt at any moment?  His wrath is righteous – after all, it is Kratos who has come under attack, has seen the sanctity of his home violated and his son threatened.  It would be perfectly understandable for Kratos to give into his own base impulses and go berserk against those who threaten all he holds dear.

Chris Roberson’s script takes the smarter route, showing Kratos coming to terms with himself, realizing that to give in to his savage impulses makes him no better than the beasts who hunt him and his son.  It adds depth to a character that in a video game, is an avatar for violence, and allows the reader a greater appreciation of a man who is more than a killing machine.

Atreus as a character can go one of two ways – his weakness, inability to fight, makes him something of an irritating damsel in distress.  But his eagerness to please his father and help out as best he can makes for an appealing character, on the other hand.  How Atreus develops in future issues will go a long way in determining if the story arc is basically a rolling brawl, or something that allows a deeper connection, with, and between, the characters.

Tony Parker’s art is wonderfully kinetic, especially in the opening battle between Kratos and two huge creatures.  He flings Kratos around the page, making him into a human wrecking ball with no fear.  Kratos’ punches land with real force that leaps from the page and the creatures are depicted as huge monsters that dominate the panels they appear in.  Afterwards, Parker allows a more pensive Kratos to appear, one unused to introspection, but whose distant gaze allows a glimpse of a man struggling to come to terms with new responsibilities in a hostile environment.

BOTTOM LINE – HOLDING ONTO A HERO

God of War #2 is an entertaining, at times, thought-provoking issue.  The fight scenes are well realized, and have real impact through Parker’s skillful artistry.  Kratos comes across as a strangely sympathetic man coming to terms with new responsibilities that cannot be dealt with by fists alone.  Overall, Roberson balances the action and the introspection very well, and if the issue ends on something of an inconclusive note, it still points the road ahead for further exciting adventures of the God Killer.  There’s plenty of heroic action in comics today, but there may be none so exciting and full of promise as the adventures of Kratos, the God of War.

There’s plenty of heroic action in comics today, but there may be none so exciting and full of promise as the adventures of Kratos, the God of War.