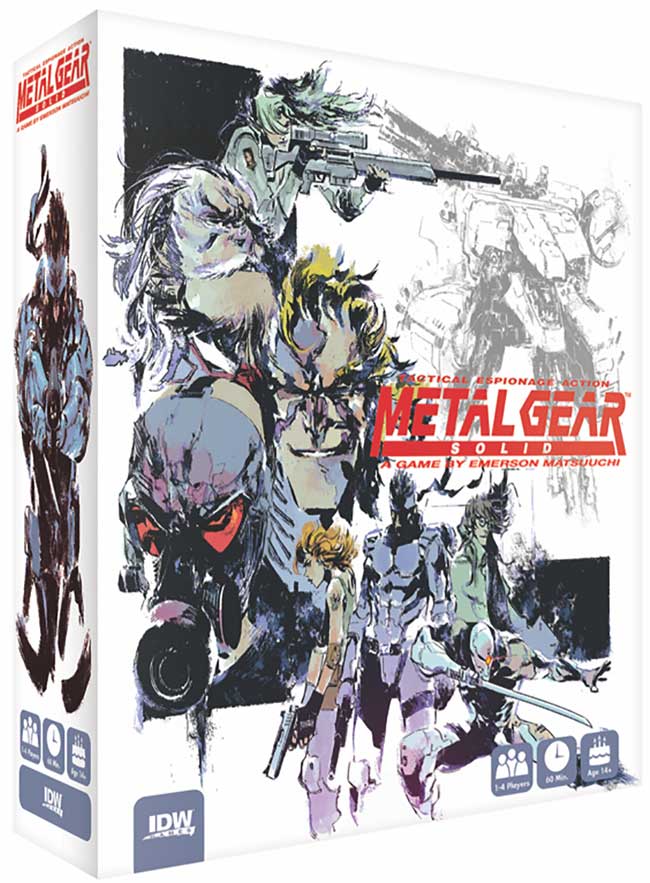 IDW Games has announced it is currently working on a miniatures-based board game based on Konami’s Metal Gear Solid. Designed by Emerson Matsuuchi (designer of the Century game series, Reef, and Specter Ops) Metal Gear Solid: The Board Game is a fully cooperative, miniatures board game. Following the story of the first Metal Gear Solid video game, players take on the roles of Solid Snake, Meryl Silverburgh, Dr. Hal “Otacon” Emmerich, and Gray Fox the Cyborg Ninja. They’ll need to use their unique skill sets to avoid detection as they complete objectives across multiple campaign scenarios. Featuring a highly dynamic A.I. system and sandbox gameplay, missions can be completed in multiple ways and will always play out differently

IDW Games is the company behind the Teenage Mutant Ninja Turtles: Shadows of the Past board game, that we have played on the Munchkin Land show, and it is a fantastic game. If Metal Gear Solid is half the game, I think MGS gans will love this.

Game designer Emerson Matsuuchi says, “I’m probably the biggest fan of Metal Gear Solid. Ever since playing the first Metal Gear Solid, it has forever altered the way I view games. The story it told was so memorable and the gameplay experience so rich that it has shaped my expectation of games as both a designer and gamer. So the opportunity to bring this masterpiece to the table has been an honor and dream come true. I’m excited to be able to capture the tactical stealth action that is the hallmark of the franchise as well as create a new experience and story for the Snake fans. Age hasn’t slowed him down one bit.”

Metal Gear Solid: The Board Game will make its debut at E3 2019, and will also appear at various conventions through 2019 ahead of the release.