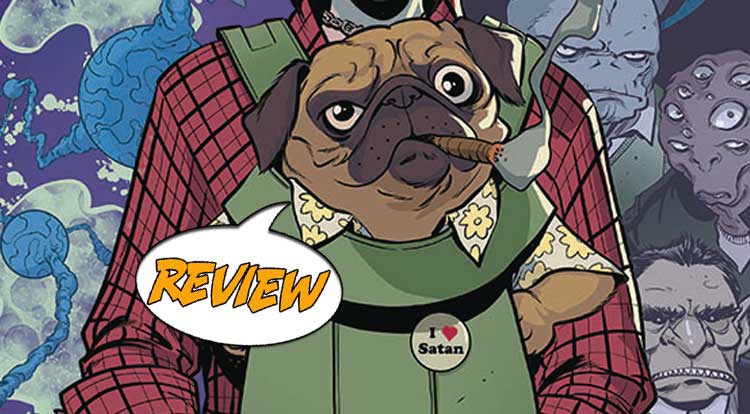 The war between realities is over. The wrong side won. Your Major Spoilers review of Grumble #1 awaits! Previously in Grumble: When the forces of good and evil are hunting you down, the only logical thing to do is disguise yourself as a dog and go on the run! Eddie is a low-rent hustler who got magically turned into a pug during a con gone wrong. Tala is Eddie’s long-lost, part-demon daughter. When Tala finds herself the target of powerful inter-dimensional forces, she goes to Eddie for help-setting off a chain reaction of chaos and destruction that could threaten the very fabric of existence. Can Eddie and Tala put aside their differences long enough to survive the magical mayhem and madness that they started, or will they kill each other first?

”MAGIC IS A GIFT FROM THE GODS!”

Things open in Baltimore, where a young woman named Tala bluffs/magics her way into a high-stakes poker game run by a criminal called The Imp. Well, not just CALLED The Imp, he actually is an imp, as in a tiny goblinesque fellow with pointed ears and a pronounced underbite who hates being conned. That’s where Eddie comes in. Or rather, where Eddie gets out, with a busted nose and a little help from Tala’s magics. She informs him that her mother, a woman of Eddie’s acquaintance, has passed away and that mom always told her that he would help Tala in her hour of need, but Eddie isn’t interested. Instead, he wants to harness her powers to fatten his wallet. Turning into a dog, he sets up a snatch-and-grab from a young daytrader, but Tala actually does him one better, compelling the man to tell her the account number and password of his hidden bank account. Their criminal activities are interrupted, though, by the arrival of a S’taera a creature that may be a god or perhaps an archangel, but whatever it is, it’s after Tala!

A NICE SETUP AND SKILLED WORLD-BUILDING

Within a few moments of opening Grumble #1, you know what sort of world we’re going to be living in, one that mixes a very grounded plot with some very far-out fantasy elements. Then, things are turned on their head with the addition of science-fiction elements, and then once again with the final page reveal of a new player. I really enjoy how Roberts plays out the events in this issue, avoiding massive infodumps while still conveying tons of information about our lead characters and the world they live in. Mike Norton’s art carries an equal share of that world-building, especially in the reveal of the arcane elements early in the story, and his rendition of Eddie as a little bipedal pug is perfection. My biggest complaint is that the solicitation gives away some information that isn’t revealed in the actual issue, which undermines some subtle character work and also gives away what ideally would be a big reveal later in the series.

Even with that minor disappointment (one that I hope most people won’t even notice), Grumble #1 is pretty marvelous, with attractive, evocative art and a story that expertly mixes multiple genres to successfully create a new one, earning 4.5 out of 5 stars overall. Another huge plus: This issue’s cover is funny, good-looking and attention-grabbing, which is a must for the first issue of a book from a small publisher, so good work all around!

Well-drawn, well-written and cleverly conceived. This is a winner!