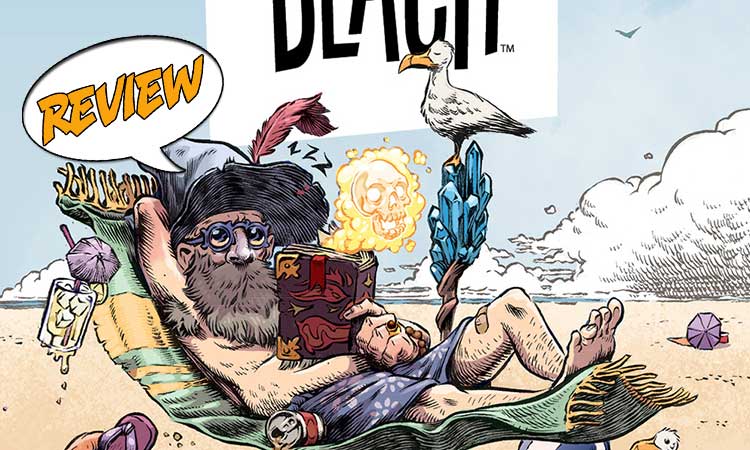 In a frigid part of the world, the cold is sapping the power of magic. Hexley Daggert Ragbottom isn’t going to take it anymore. If his father won’t do anything, he’s going to seek help from his disreputable Uncle Salazar! Things are not looking so bright for young wizard Hexley Daggert Ragbottom – magic is dwindling, creatures are turning to the dark forces, and life is a hopeless, never-ending battle to maintain the status quo. But not if Hexley has anything to say about it!

Wizard Beach #1 starts out not on the beach. In fact, it’s about as far from the beach as you can get in a mountainous, frozen landscape where a battle is going on among humans, giants, elementals, large creatures – a whole magical menagerie. A middle-aged wizard with a walrus mustache features prominently, and it turns out that he is Hexley’s father. He goes home to say that the battle didn’t accomplish anything, and we get the obligatory father-son conflict scene where the young man is sick and tired of nothing ever changing, and he’s going to seek out his Uncle Salazar, learn magic from him, and then come back and save the day.

This is where the world gets more interesting, because it isn’t all a quasi-medieval fantasy world. The city looks much more modern, and Hexley catches a bus to the beach and sets off to find his uncle. Salazar is on the beach, using a flying carpet as a hammock. As you might imagine, the young wizard is not terribly impressed, and Salazar (or Sally, as he prefers) does not see a point for urgency.

Wizard Beach #1 is divided into chapters, and the chapter divides are also devices that shows us a little more about the world. It’s a clever technique. Hexley already has a wordy, formal style of speech and this keeps some of the information dump out of the conversations.

Instead of keeping to themselves, in the warm lands by the beach, wizards are out and about, as well as other magical beings. The second chapter has Hexley pestering Sally into teaching him magic, while the older wizard is ignoring him and having his beard groomed at a salon. Then the fairy find what looks like a small imp in his beard. This is apparently an old friend of his. He gets up to leave, but before he does, his dentures, which have been soaking in a glass, remind him of the weekly wizard’s lunch. This is what happens, friends.

Then we meet the Wizard Beach Council. Salazar is not the only one who enjoys life on the beach. We meet three other wizards, one of whom is dead, at least much of the time. Sally introduces Hexley as being from the bad, cold place they don’t talk about. The conversation is rather odd and tangential, with Hexley mainly being disapproving, probably since the wizards seem more interested in food than magic. And then there’s a scene were Salazar, looking for some seasonings, finds a spice demon in his cupboard. There are a few hijinks, and Salazar conquers the demon with salt and pepper, rather than magic. Ultimately, Hexley is disillusioned by them all – their food, manners, and lack of hygiene primarily – and starts to go off in a huff.

It’s a kind of interesting tale, and the world is imaginative. I found everyone’s speech patterns to be a little stilted, and there are sections where it seems like characters are using way too many words to say stuff. The story jumps around, and without having a feel for whether that is the style or not, it feels kind of choppy.

There’s something about the art of Wizard Beach #1 that makes me think “1970’s”, and not in a bad way. It’s a style with some caricature, very strong line work, and exaggerated foreshortening, which to me is reminiscent of work from that time. The ink does a lot of the heavy work in shading, and the detail is fantastic. The interior of the house where Hexley and his dad live is absolutely packed with stuff – heavy, carved wooden chairs; drippy candles; books; herbs; scientific models; etc. This level of detail continues throughout. The more I look at the beach scenes, the more little things I see in them, so this is really fun.

The characters are imaginative and quirky. Uncle Salazar does look like a wizened beach bum – board shorts, sandals, wacky sunglasses, and of course his wizard staff. His friends are distinctive in their styles of dress as well. I do like the spice demon – a sort of five-pointed starfish looking creature with a single eye (yeah, a bit like Starro) is actually pretty expressive.