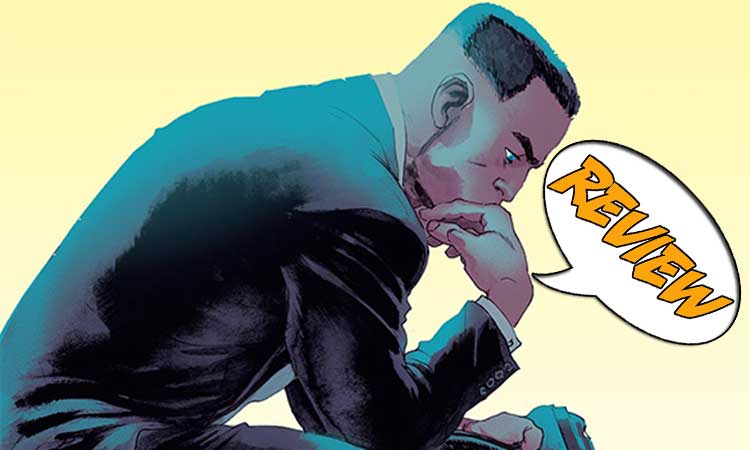 Meet Elliot Crane – childhood genius prodigy, with a taste of danger.  Formative incidents in his youth are explored, before we meet him as an adult, cool, calm and definitely brilliant in this opening issue of Prodigy. Previously in Prodigy: Elliot Crane is a boy genius who grew up to be the smartest man alive.  Fearless and skilled in just about any discipline known to man, he has angered his father by refusing to knuckle down and get a real job, instead of taking on insane risks and tasks that suit his skills.  Watch as Elliot discovers an invasion from a parallel Earth hiding in plain sight…

Elliot Crane is the sort of brainy kid who would find himself being beaten up by all the cool kids behind the sheds at school, if not for the fact that he’s the one doing the beating up.  The smartest kid alive, with a fierce determination to win, Elliot has grown into a man of action, taking on multiple challenges (often at once) and winning every time.

If being a genius is a superpower, then Elliot is the Superman of this world.  The opening pages of Prodigy #1 see him as a school kid, a prodigy far in advance of his peers, intellectually and physically.  How he deals with bullies, how he treats his friend’s heart condition are all pointers to the way he will act like an adult – with remarkable self-assurance and an ice-cool attitude.

Mark Millar’s Prodigy #1 is so out there that it is almost a comedy.  Elliot’s intellect and will to win make him unbeatable.  He plays in chess grandmaster championships against multiple opponents while designing a rocket to deflect a planet killer asteroid.  And finishes the day riding a motorcycle, while on fire, across the Grand Canyon.

Prodigy #1 doesn’t take itself too seriously.  In fact, it’s the sort of pulpy good time that should draw in a decent audience.  Elliot’s devil may care attitude, his cool self-assurance, and freakish ability to succeed, put him in the top echelon of pulp era heroes like the Shadow or Doc Savage – a character able to overcome impossible odds time and again, and who always wins, no matter the odds stacked against them.

As a result, the stakes are actually quite low.  When you write a hero who cannot fail, at least in this opening issue, there’s very little threat and thus very little tension.  To compensate, Millar fills this opening issue up with incidents on each page.  There’s a breathless tone that sweeps the reader along to the finish, often hiding the nonsense that is going on in the issue.

IF YOU DON’T LAUGH, YOU’LL CRY.

And while there is a lack of high stakes (even the invasion from a parallel Earth is treated in a lighthearted way), the issue is amusing throughout.  Elliot performing open heart surgery on his friend in his bedroom should be a ghastly disaster full of blood and screaming – but Millar plays it cool, with Elliot admonishing the distraught parents to be quiet, and declaiming deadpan that his friend will be back on his feet in no time.  Everything – the chess games, the appearance of test vehicles in the Australian Outback (pedant alert:  memo to Millar – the police in the Northern Territory where tan uniforms, not blue with light blue stripes) and even the discovery of a conspiracy working with the invaders, is played for its gentle, over the top humor.

Helping disguise the lack of tension is Rafael Albuquerque’s art.  His line work is immaculate, and coupled with Marcelo Maiolo’s coloring, lends a painterly quality to the pages.  Under Albuquerque’s art, young Elliot Crane is an angel with a devilish gleam in his eye.  As an adult, his Crane is an imposing figure, dominating each scene he is in with his imposing stances and dynamic gestures.  Possibly the standout art in Prodigy #1 is Elliot, aflame, leaping across the Grand Canyon in a single beautiful splash page that evokes many happy memories of Evil Knievel’s failed attempt in the 1970s.

BOTTOM LINE – LIKE ITS LEAD, WHIP SMART AND WITH PLACES TO GO

Millar’s skill in setting up Elliot’s backstory with economy and grace allows the story to build up to a breakneck speed very quickly.  Prodigy #1 is a delightful book on a number of levels, particularly the good, pulpy fun throughout, and the beautiful artwork.  If you’re looking for a heavier treatment of the themes and story in this issue, this isn’t the place to start.  But if you’re interested in excitement and adventure and a story with a big heart, then Prodigy #1 is the book to read.

Millar’s skill in setting up Elliot’s backstory with economy and grace allows the story to build up to a breakneck speed very quickly. Prodigy #1 is a delightful book on a number of levels, particularly the good, pulpy fun throughout, and the beautiful artwork. If you’re looking for a heavier treatment of the themes and story in this issue, this isn’t the place to start. But if you’re interested in excitement and adventure and a story with a big heart, then Prodigy #1 is the book to read.