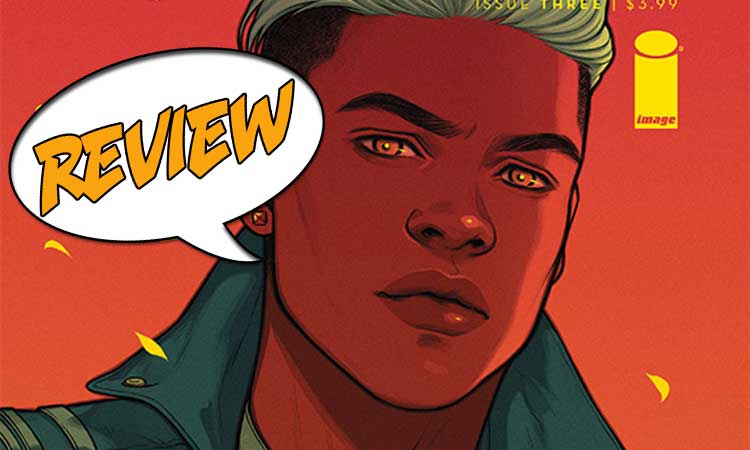 After another Paragon attacks Nina, and she and Clint fend her off, he finally shares a little information and agrees to help her find her sister. What obstacles now lie in their path? Previously in Blackbird: Nina tracks down the young man who kept hanging out at her bar and tries to talk her way into the clinic that is apparently his address. After being thrown out, she sneaks in the back way and finds herself in a fancy room full of Paragons, wearing cirques and picking up small, magical gems. Nina gets kicked out and finds she is being followed by a mysterious dog. She uses a gem to capture it in a magical sphere, only to find it is Clint. As she tries to make sense of this, a woman with two knives drops in and attacks her!

NINA STARTS GETTING SOME ANSWERS

Blackbird #3 has some rather complicated world-building, and we start out with a little more of Nina’s history, only this time it is directly relevant to the story. She recalls the day she found out her mother was dead – this was the beginning of the downward spiral of her life. Her family and her world both started falling apart. As she recalls this (somewhat resentfully), flashes of the present intrude. The blonde attacker (Adrian) has stabbed her, and she has a snake-knife of mystical energy in her chest. This channels Nina’s negative emotions into power, which the blonde Paragon can absorb and use. It also so happens that Clint and Adrian had a break-up, so there are additional tensions there. Nina manages to pull out the knife; Adrian loses her influx of power and flees, and Clint demands to know how a civilian could do what Nina did.

Nina collapses and later wakes up to find herself with Clint. She asks him directly if he is a Paragon, and he admits that he is. Nina insists that he help her find her sister, Marisa. He says his job is to watch her back, and that’s quite enough. Nina tells him about the giant beast who took her. He recognizes this as the Great Beast, the “gnarliest demon” in L.A., and they are most definitely not going after it. Nina angrily stalks out of the room and finds herself in yet another grand gathering place of Paragons. Clint catches up with her and again tries to get her to tell him how she was using magic. Nina demonstrates her knowledge of Paragon cabals and eventually does talk him into helping her. About that time, Adrian shows up with her sisters.

Clint and Nina make a run for it, and this is where we find out that this Paragon hideout was in a taco truck (a bit reminiscent of a TARDIS). Clint takes her out of the area, and she sees Hollywood through Paragon eyes. They go to Griffith Observatory, have a little more discussion, and the Great Beast appears, along with a big reveal.

I’m happy that it finally feels like the story is moving along. We have enough idea of what’s happening, and Nina has a chance to talk to Clint (and he actually answers her), so we can confirm some of her knowledge about Paragons. There have been flashbacks in previous issues, but this one is shorter and more relevant to the story – it no longer feels like we’re just establishing that Nina has had a tough life.

The art in Blackbird #3 is so clean and so pretty. In this issue, though, I really like when Nina, in her flashback, is also starting to remember what the present is. The panels start cutting from the past to the present, using color to help us keep track. The mystical energies of Adrian’s knife, and magic in general, really do look magical.

We’re learning that there are cabals in different places in California, who are in conflict with each other. Each cabal has its own very distinctive style of dress, and I like how those are done. They’re very flamboyant and all very different from each other. All the Paragons are still very, very pretty people. With Adrian threatening to attack Nina, as well as Clint’s cabal, this is shaping up rather like a gang war between gangs of unearthly good-looking people.

The scenes of Hollywood with the overlay of the Paragons’ world are also quite lovely to look at. In the tradition of magical worlds, they have places hiding in plain sight. I like the way they glow at night, with hints of almost rainbow-like color.