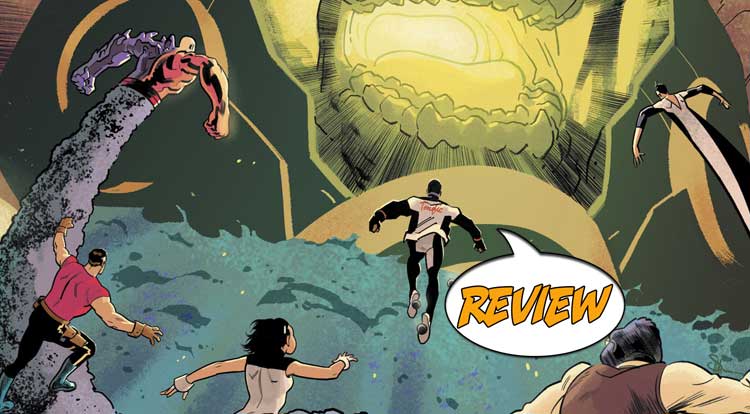 Previously in The Terrifics: Is there a totally titanic termination in store for the Terrifics?  Mr. Terrific and company team with the Tom Strong family in a final battle against Doc Dread, who’s leveraging the power of a dark god to kill everyone in his path.  With the fate of the Multiverse AND the Dark Multiverse hanging in the balance, it’ll take a team-up of Terrific proportions to save the day.  Just don’t expect the group to escape unscathed when all is said and done…

ALL HECK HAS BROKEN LOOSE!

As the issue opens, the truth of Doc Dread is revealed: He is Java, Simon Stagg’s cro-magnon bodyguard!  As the team tried to come to terms with that revelation, as well as the loss of Metamorpho’s powers, Dread manages to awaken the Dark Titan that started this whole mess when the team was in the Dark Universe!  Teaming with Tom Strong and his family (daughter Tesla, wife Dhalua, simian companion King Solomon and steam-powered A.I. Pneuman), they combat the undead giant.  Of course, fighting isn’t any more helpful now, causing Mr. Terrific and Tom Strong to duck out of the battle and repair the device that Tom created to keep the creature in the Dark Universe, while Rex Mason tries not to die without his shapeshifting powers.  Once the threat is ended, the Terrifics realize that, since they’re no longer forced to stay together, there’s no reason for them to be a team.  Rex sadly leaves, feeling he can’t contribute anything, while Plas slips away while no one is looking.  Though Phantom Girl argues that they’re a family, Mr. Terrific sadly points out the Strong family as an example of REAL family, declaring “The Terrifics are no more!”

With the cancellation of a couple of the New Age of DC Heroes titles, I was worried that Terrifics #10 was a final issue sending the series out with a bang, but it seems like this issue’s last-page isn’t a death knell but another Fantastic Four riff.  There’s also the last page appearance of Doc Dread (perhaps the real one?) monitoring the Terrifics from afar to give me hope, as this was a really fun issue.  The story being told here is both exciting and well-conceived, making great use of DCU history and the potential of the Dark Universe for storytelling purposes.  This issue’s art is not as slick as the previous art teams, but the action sequences are top-notch, and it maintains the strong facial expressions that have made previous issues so engaging, especially during the final conversations about breaking up the team, with Tina’s desperate protestations and Mr. Terrific’s fatalistic insistence that it’s over.

When the New Age titles were announced, this is the one I had the most hope for, and its roster of established characters gave it a leg up on its sister books, but the execution so far has been impressive.  The Terrifics #10 keeps up the run of better than average issue, with strong and dynamic art and a story that successfully makes me worry about whether the team is going to keep it together, earning 3.5 out of 5 stars overall.  Here’s hoping that this book outlasts its line, much like ‘Transmetropolitan’ did the Helix line of comics last century, as it’s a fun title with a great cast.

It's the end of the world as they know it, but it's a fine comic book reading experience, with a lot of fun FF nods built-in.