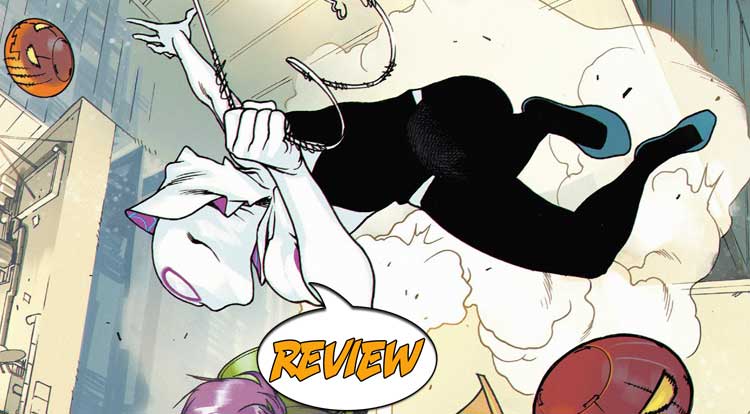 Previously in Spider-Gwen: Ghost Spider: Trapped on a parallel world as her friends are dying, there’s something very familiar about SPIDER-GEDDON to Gwen Stacy.  But with her teleporter watch destroyed and no way to get home, Gwen has no choice but to sit idly by while her friends suffer and the Inheritors wreak havoc across the entire Web of Life and Destiny!  Or not…

Well, actually, now that I mention it, we’re not on Earth-65 at all.  In fact, Gwen Stacy has no idea where she is in the Multiverse after having her teleporter taken and being thrown into an alternate world.  Still, dramatic irony is still a thing, so the first person she encounters is young Peter Parker.  He’s stunned to see her, especially in the wrong costume, and she explains her situation.  Alt-Peter then spills the beans to her: On his world, Harry Osborn became Spider-Man and his Gwen was Spidey’s partner The Green Goblin.  Things were roughly parallel to her world (and the mainstream 616 Universe) until the death of Captain Stacy, a tragedy that changed Gwen, leading her to lash out and kill Spider-Harry.  Now, she’s gone rogue, and Pete refuses to help Spider-Gwen until she agrees to help him save his Gwen.  With her hand forced, Gwen goes with him to meet Mary Jane Watson, who has a plan to find Gwen, with the expectation that Green Gwenblin’s technological knowledge will be enough to get Spider-Gwen home.

I’M NOT SOLD ON SPIDER-GEDDON SO FAR

The Spider-Verse storyline that gave us a universe of Spiders versus The Inheritors was very recent, so I was skeptical when Marvel went back to the well with Spider-Geddon this quickly.  That said, I enjoyed this issue, especially the art, which is reminiscent of early issues of Ultimate Spider-Man.  Gwen’s costume looks amazing, and the design work on the alternate Spider-Man and Green Goblin costumes is really creative.  The world-building is fun as well, though I’m a little bit worried that Spider-Gwen is going to become the “everybody in the cast gets a chance as the spider-hero” comic book.  Still, this issue builds tension really well, making the possible match-up of Spider-Gwen and Green Goblin Gwen in coming issues seem both exciting and inevitable.  Best of all, we get an alternate Peter who seems to be kind of a manipulative jerk, which at least makes for an interesting alternate world.

Gwen hasn’t changed her name to Ghost Spider yet, but it’s clearly coming and that’s a long-needed alteration to her status quo, making Spider-Gwen: Ghost Spider #2 a well-drawn and well-plotted comic book that draws you into Gwen’s adventures and this interesting alternate world, earning 3 out of 5 stars overall.  This creative team  has a lot going for them, so I’ll be checking in with coming issues of Spider-Gwen to see where this is all going.

It looks really good and the world-building is fun, but it's hard to escape the shadow of Spider-Geddon.