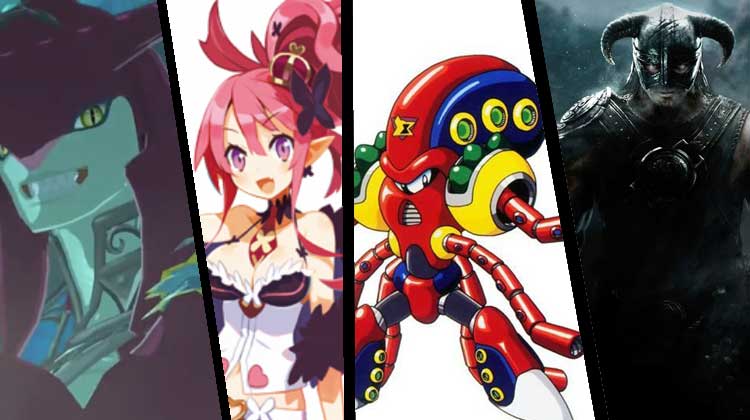 Super Smash Bros. Ultimate is coming in just a few days and we already know that there are going to be five new downloadable content (DLC) characters and stages over the course of the next year. What will these new characters be? Nobody knows!

Fortunately for you, I have used a powerful algorithm to help narrow down the major categories those characters will fit into, from there it was just a matter of going with the most logical choice.

A New-to-Nintendo Classic Character
A Rival for an Existing Character
A Nintendo Newcomer Who Has Become A Fan Favorite
A New Female Character, But not The One You Think!
A Big, Unexpected 3rd Party Surprise Name: The Dragonborn
Game: The Elder Scrolls V: Skyrim
Associated Stage: The Throat of The World
Associated Track: Song of the Dragonborn
Final Smash: FUS! RO! DAH!
Skyrim is now available for the Nintendo Switch, and with a new Elder Scrolls game in the horizon having “The Dragonborn” as a playable character is a cross-promotion win/win for Nintendo and Bethesda. Of course, the main version would be that guy with the iron helmet (The one with the horns), but the other skins should be all over the place, an Argonian in daedric armor, an Orc mage, etc. I think each character gets six outfits, so we could have three male and three female Dragonborn. Move-wise, I envision his side B as a directional “FUS!” shout that can be tilted up or down and has mostly knockback. Of course, the Dragonborn is all about weaponry (and can carry several thousand pounds of it) so different smash moves could incorporate swords, axes and maces.

Each new character in Super Smash Bros. Ultimate is going to come with a new stage, and although they haven’t said that they’ll be tied to the character it makes a lot of sense that they would. The Dragonborn’s associated stage would be The Throat of the World, a perilous and windy mountain, Paarthunax shows up periodically in the background.

A Rival for an Existing Character! Name: Launch Octopus
Game: Megaman X
Associated Stage: Ocean Stage
Associated Track: Ocean Stage Theme
Final Smash: Chill Penguin, Boomer Kuwanger, Spark Mandrill, Launch Octopus, Armored Armadillo, Flame Mammoth, Sting Chameleon and Storm Eagle show up and beat you up!
Super Smash Bros. Ultimate is doing something interesting where, rather than have all characters from particular series share a unified look, each character reverts to an “iconic” look. This is why we have Ocarina of Time Ganondorf, Link to the Past Zelda and Breath of the Wild Link. So even though the Megaman in Smash Ultimate is the classic one, we can still have a Megaman X villain! Launch Octopus has a lot of visual and mechanical aspects for developers to play with, from its myriad munitions to the fact that his tentacles could be cut off.
The Ocean Stage would replicate the look of Launch Octopus’ stage, featuring rising water levels and robot hazards.

A Nintendo Newcomer Who Has Become A Fan Favorite Name: Sidon
Game: Zelda: Breath of the Wild
Associated Stage: Lanayru Great Spring
Associated Track: I’m guessing a lot of Breath of the Wild music is already in Smash, so we’ll have to see.
Final Smash: A big robot elephant washes everyone off the stage!
Before Venom or the Lost in Space robot, the internet was thirsting after this sexy shark prince. And why not!? Equipped with both killer pecs and a winning personality Sidon would be a great addition to the roster! I see him as a strong skirmisher, taking a trident to anyone who gets in his way.

This is also a great opportunity to get more of Breath of the Wild’s amazing aesthetic into the game. Lanayru Great Spring would be a beautiful and ample stage to look at with no hazards or other weirdness, just a big, cool blue/purple fountain world with fish people waving at you.

A New Female Character, but not the one you think! Her Stage, Gorgeous would start out as an opulent, gaudy purple and gold nightmare, then after some damage has been done to its platforms the background falls back revealing a barren wasteland. Name: Junkrat
Game: Overwatch
Associated Stage: Junkertown
Associated Tracks: Overwatch Theme, Junkertown Theme.
Final Smash: Riptire!
Hear me out here! There is already precedent for Smash Bros. having characters with minimal Nintendo system interactions, I don’t think anyone would have ever called Final Fantasy pretty boy, Cloud a “Nintendo character.” More importantly, though Junkrat already plays like a Smash Bros. character. Bouncing bombs onto your opponents from a high platform? Launching explosives that send opponents (and himself) flying? An explosive ultimate attack? Yes. All of that.

So why Junkrat instead of, say, Overwatch mascot Tracer? Well, Tracer would also be cool, but when I looked at the Overwatch roster and I thought, who’s the Smashiest? Tracer didn’t even crack the top 10. And before anyone @s me, yes, I know Doomfist is literally meant to be a fighting game character, but it’s a little on the nose, don’t you think?
The Junkertown stage would actually move you through a 2-D version of Overwatch’s Junkertown map, but only when characters are making contact with the payload.

And that’s it! Am I confident this list will come to pass? Not really, but I think it’s clear that the Smash Bros. team is more interested in making big, splashy cross-promotional statements with this game than to bring you another overall-wearing mustachioman. In that sense I think this list reflects the spirit of the game much more than others.

What do you think of my predictions? Am I on the money, or have I missed the target completely? Share your thoughts, reactions, and of course your pick for DLC characters in the comment section below.