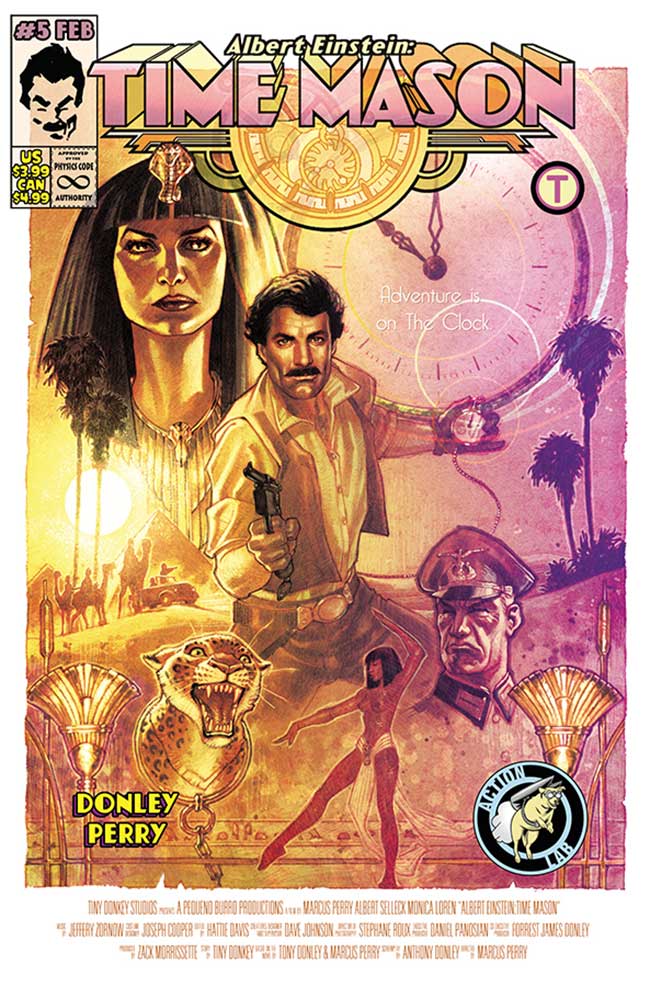 Your favorite smooth talking, sure-fisted, mustachioed adventurer is back for a dimension-bending adventure that turns up the heat like never before. ALBERT EINSTEIN has his sights set on ancient Egypt (where it’s really toasty), and he’ll need the Queen of the Nile herself, CLEOPATRA, to help him trap a thief that’s wreaking havoc on our timeline. But as Einstein discovers, this bandit is just a pawn in a dark scheme that will unravel history! ATHENA VOLTAIRE AND THE TERROR ON THE ORIENT EXPRESS, part two. En route to Paris, the grisly murders continue onboard the train. Trapped with the creature, the hunted become the hunters as Athena leads the survivors in a search to find—and stop—the horrific killing machine! SUPLEX and DOGPLEX must face the evil SUPLEXIANS when they come to retrieve their…dog? That’s right, fans! The Suplexians are here to take back the powers and the dog that belongs to the world of SUPLEXIA! SUPLEX is forced into a fight to the finish! The loser must give up the powers or leave Earth forever! Will our hero be banished? …or does SUPLEX have a chance to defeat the evil TRIO from space? How does the HERO SQAUADRON play into this? Join us for the epic conclusion to the first mini-series story arc! Based on the vintage super hero creations of famous cartoonist Art Baltazar! AW YEAH! It doesn’t get any bigger than this! The volume 7 finale is here and nothing will ever be the same. Secrets revealed! New paths set! Everything is coming together! And by the end of this book one person will give up everything they’ve fought for to save their friends. Maggie isn’t your typical comic book, cartoon, and action movie fangirl. Through keen observation and unbending determination, she has taught herself all the death-defying stunts and fighting styles of her favorite action stars and superheroes! Unfortunately, Maggie has kept her eccentric hobby to herself, ever since it earned her the label of “nerd” among her classmates. After all, superheroes and evil villains are all kid stuff… right? WRONG! The day before she begins high school, Maggie has a run-in with an evil mastermind and his sinister mercenary group. After years of training, it’s up to Maggie to be the self-taught superhero the city needs! But with bad guys crawling out of the woodwork and the daunting unknown of a high school ahead of her, can she really take on the world alone?