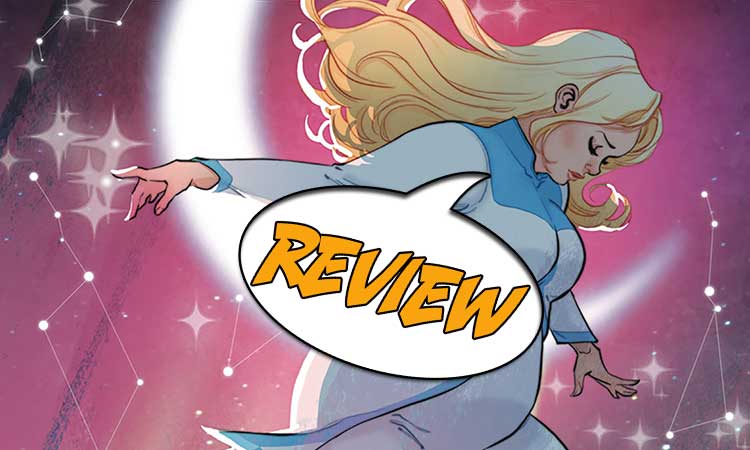 Searching for Animalia takes Faith and Dr. Mirage into the Deadside – but what kind of dead realm is this? Giggling flowers? Talking trees? Is it sweetness and light, or do they hide something more sinister? Previously in Faith: Dreamside:  Faith is on the lam and trying to help Monica, a young psiot, who is having trouble with spirits tormenting her at night. They manage to talk to – and intrigue – Dr. Mirage who tentatively agrees to help them. That night, the spirits appear, and are visible to everyone – not traditional with spirits – and despite Faith’s and Dr. Mirage’s best efforts, they steal Monica away!

Faith: Dreamside #3 opens with our title heroine contemplating her own thoughts about heaven when she was a child, and her parents died. (How fitting is it that she imagined it like a fandom convention.) And then we’re there – in a place that looks like something out of Roger Rabbit. The flowers have faces, the bushes have faces, the trees – well, you get the idea. It is not what anyone was expecting, but Dr. Mirage explains that there are countless different realms in the Deadside. The flowers, while they giggle, do not talk or help them, and they find a yellow brick road and choose to follow it. Behind them, what they don’t see is how the foliage changes to dead or dying, with appropriate faces.

We briefly see Monica (Animalia) in a dark cave, being tormented by her spirits. She goes to draw on her power and attack them, but she cannot. And something in the dark, with a very toothy grin, informs her that she has lost…everything.

Faith and Dr. Mirage converse – the Deadside realms have rules, but you can’t always tell what they are until you break them. Also, while it may feel like it, the two of them aren’t in their real bodies. As Faith experiments to see if any of her powers work, they are confronted by a Transformer-like dragon. Fighting it doesn’t seem to slow it down, and neither does trying to reason with it. But something does take it out, and that something is a trio – Hwen, a duplicate of Faith, and a little four-winged cherub. As the now larger group continues along the path, Faith has a heart-to-heart with her duplicate about such things as being a hero, and self-sacrifice. Hwen and Dr. Mirage also talk for a bit – about her moving on without him.

Before too long, they find a cave and charge in. As they do so, the cherub, which seemed like a benevolent guide, falls behind them and smiles – a big, toothy grin much like that of the thing that was talking to Monica earlier. Then an enormous serpentine tail comes seemingly out of nowhere, sweeps our heroes off their feet, and they are confronted by a very large, winged serpent.

FROM FANCIFUL TO HORROR-FILLED

At the start of Faith: Dreamside #3 the art is almost kooky. I mean, in Roger Rabbit, Toontown was pretty wild, but it fit with the toons. Here, the Deadside realm seems utterly fantastic, and Faith and Dr. Mirage look wildly out of place. I love the broad color palette. It isn’t super-saturated, so it has a soft feel to it, but it is undeniably colorful. This makes the liveliness stand out, and the contrast is much more stark when we see the dead foliage appear in passing. With great detail, I might add, such as tiny little skulls and sunken, staring eyes.

It is cool to see Faith meeting Faith. Her duplicate is dressed for a con, but they’re undeniably the same person. Seeing the many expressions cross their faces as they talk is quite lovely. I also like seeing that Faith is genuinely fond of her duplicate, and that her duplicate can tell her some hard truths that are all the more believable, as Faith hears them with her own voice.

The little cherub, who apparently turns into the monster at the end, is something else. It is, like the outer appearance of the rest of this realm, almost saccharine in sweetness. It’s chubby, it’s always smiling, it has huge, innocent eyes. Seeing the dreadful teeth appear on its face almost gave me chills.