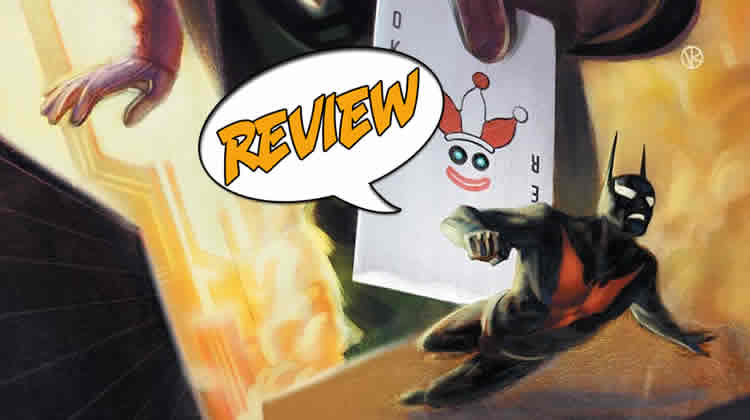 The ultimate Batman stories feature the hero versus the Joker. While other tales are often great ones, there’s something special when the Dark Knight and the Clown Prince of Crime go at each other.

It took a long time before the Batman Beyond series actually featured the return of the Joker (hence the movie’s name), but it was well worth it. Batman Beyond #26 has brought Joker back again, and it’s a fascinating read!

SOLICITATION: The Joker’s back—and he wants to turn Batman and Robin into a punchline once and for all! The original Clown Prince of Crime returns to stalk Neo-Gotham in part two of “The Final Joke”! Can you guess what happens when he encounters Barbara Gordon for the first time in decades? And when Robin gets caught on a video feed for the first time, no one’s more delighted than The Joker.

IS IT REALLY THE JOKER?

I won’t spoil the Return of the Joker movie if you haven’t seen it yet, but let’s just say that it wasn’t exactly that baddie who showed up there. It looks like Mr. Jurgens, always great with a story, has a way to bring the original Joker back this time, and he seems to remember everything that prime villain had done before!

Right now, the current story is titled, “The Final Joke,” and this is part two of that tale. It’s quite a gripping and surprising story, but I’ve come to expect no less from Mr. Jurgens.

I do need to admit that I have fallen behind with this title. There was a time when Batman wasn’t Terry McGuinness, and I kind of lost interest in the book at that time. He’s back in the suit now, however, and he’s got a Robin as well. If you watched the animated show, you may remember that Terry had a younger brother. Well, three guesses who’s the Boy Wonder now, and the first two don’t count!

The dialogue is often critical when you are voicing characters we’re already familiar with, and Jurgens does a top-notch job with them. I can hear Terry’s voice when Batman speaks, but since the new Robin is older than the last time we’ve seen him, that gives the scripter a chance to cover new territory.

The Joker is definitely the Joker, though. I’ve always felt that that villain should be truly funny, though. He is the opposite number to the Dark Knight, so he must tell jokes that really work instead of just being a boring maître d. Jurgens makes the Joker shine, and he’s as much a challenge to Terry as he was to Bruce.

The plotting moves along at quite the rapid pace, and the characters, even Barbara Gordon, are very true to how we understand them to be.

While I always wish Jurgens could do both the writing and the art, that doesn’t work out as often as I’d like it to. Still, Booth is the perfect choice to pencil this book. His art very much resembles Bruce Timm’s, and it contains all the characterization and action I’ve come to expect from Batman Beyond.

I’m not exactly sure if Booth or Jurgens, or a combination of the two, or even someone else designed the new Robin’s costume, but I like it! I appreciate how similar parts are to Terry’s outfit while being just different enough to stand out!

BOTTOM LINE: A Joke if You Miss This Comic

It’s taken this storyline to get me back into this series, but I’m hooked again! Batman Beyond was always a great mix of action, adventure and sci-fi, so I’m on board for the foreseeable future!

Jurgens does make each issue read as if it were someone’s first, so you can figure out pretty easily what’s happening even though this is the second chapter. I highly recommend this series if you have never read it before, or if you faded out temporarily as I did!

Beyond was always a great mix of action, adventure and sci-fi, so I’m on board for the foreseeable future!