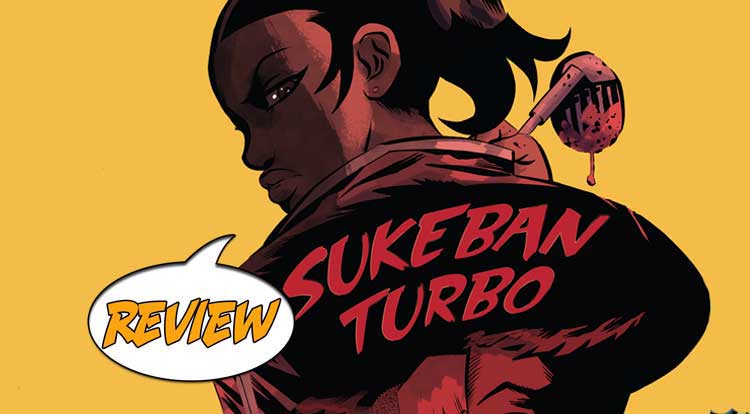 On the streets of Brooklyn, everyone knows not to cross the Sukeban Tribe.  To do so could be hazardous to your health…  Your Major Spoilers review of Sukeban Turbo #1 awaits! Previously in Sukeban Turbo:  Shelby and her three best friends rule the streets of Brooklyn and everyone in the neighborhood knows not to mess with the Sukeban Tribe.  Inspired by the Japanese girl gangs of the 1970s, the teenagers ride scooters, armed with golf clubs and cash from selling drugs, and terrorize their classmates, parents, and anyone who dares defy them.  But when they attack a classmate who hasn’t paid what she owes, things start to get messy…  and not in the fun way.

GANG WARS IN THE HALLWAYS

We open with a flashback to 2012, as two young kids conspire to shoplift from the local video store.  One fakes a seizure, while his friend slips out with the most awesome video she could find: a Japanese import called ‘Sukeban Turbo.’  Cut forward to the modern day, at Whitelake High School, as a girl named Chloe complains about her boring life and terrible classes.  When she slips off to the restroom, she is confronted by a girl gang to whom she apparently owes some money, but when she can’t ante up?  She has a terrible “accident.”  The story then follows the gang in their day-to-day life of selling drugs, vandalism and general unpleasantness, including a confrontation with gang leader Shelby’s mom that strongly implies domestic violence from daughter to mother.  We also have a brief aside featuring Urban Smile, a boy band that Shelby loves and/or used to love, and their lead singer whose public persona is that of a wholesome virgin but who ends up (unknowingly) sleeping with a prostitute hired by his manager.  As the issue ends, Shelby is awakened with the threat that she’ll end up in JAIL!

I’M NOT SURE HOW I FEEL ABOUT THIS ONE

Having missed the ‘Mature Readers’ tag on this one the first time around, I was a little bit surprised what we got in the pages of the actual issue.  Shelby and her gang brutally assault multiple people (one with a golf club, and it’s a quite bloody sequence) and while the drugs they’re selling aren’t identified, it’s clearly a white powder that means serious business.  I really enjoy the art in these pages, too, as it’s appropriately gritty and impressionistic but down to earth enough to make it all feel real.  There are some exaggerations in features or proportions, but they all work within the limits of the story being told, and the sequence of the Sukeban Tribe leaping on their scooters is really beautiful.  I’m not sure how I feel about my protagonist being a teenage criminal, but the way that the story unfolds and the dramatic moments are all expertly done, never undermining the drama of the story.

All in all, Sukeban Turbo #1 earns it’s MR tag honestly, giving us a warts-and-all portrayal of teenage gang crime, with a protagonist who I actually feel a little sympathy for, even as I kind of hate her for being a brutal thug, with strong art and EXCELLENT coloring to enhance the mood, earning 4 out of 5 stars overall.  I’m not thrilled about the people IN the story, but the story itself is pretty great.

It's not what I expected, but it's really successful at world-building and setting the tone for what is to come, and the art and coloring are fascinating.