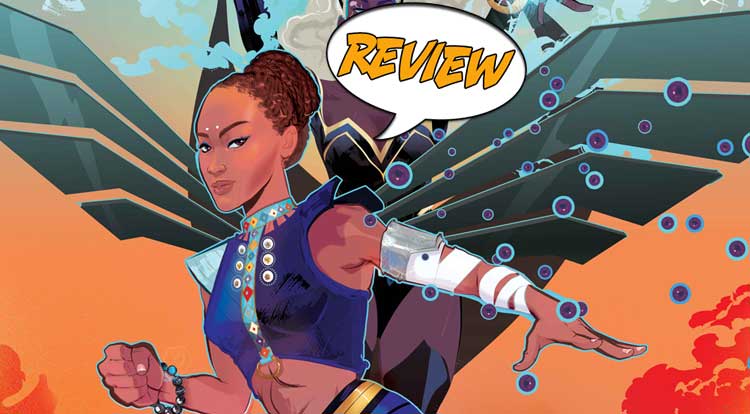 The Black Panther has gone missing, and it’s up to Shuri to find him….  but Wakanda expects her to take his place!  Your Major Spoilers review of Shuri #2 awaits! Previously in Shuri:  The king of Wakanda has been missing for weeks.  Now, his little sister is tired of waiting.  It’s time for Shuri – with a little help from Storm of the X-Men – to go save her brother for what must be the millionth time.  But Wakanda expects the princess to take the throne – and the Panther mantle – once again.  Can Wakanda survive without a Black Panther?

After her mother and a council of elders (chosen for their various perspectives on Wakanda) entreated her to once again take on the mask of the Black Panther, Shuri turns them down cold.  Rather than serve in her brother’s shadow, she intends to take the time to find him and bring him back to Wakanda, a move which disappoints Queen Raimonda greatly.  Fleeing the confrontation in tears, Shuri returns home to find Storm in her apartment, intent on finding T’Challa, divorce or no divorce.  Together, with the help of Shuri’s technology they set off for the Town With No Name, where another of T’Challa’s exes might have some ideas of how to help.  Said ex, Ikoko, has some friction with Storm, but Shuri plays peacemaker long enough to come up with a plan: She will commune with the Grootboom, the second largest baobob tree on the continent, and using it’s anchor to project her astral form out to find her brother (and, not coincidentally, her love interest, Manifold.)  Shuri is successful in sending her astral mind into space, even finding the lost Wakandan vessel before being pulled away by another signal and finding herself…

…possessing Groot of the Guardians of the Galaxy!

When they said that the tree was called the Grootboom, I suspected that we might find a connection to our favorite tree-man, but I didn’t expect that final word balloon (“I am… SHURI?”) or the look on his/her wooden face.  The expressions throughout this issue are phenomenal, especially during the confrontation between Queen and Princess, with Raimonda’s disappointment and Shuri’s surprise, embarrassment and betrayal clearly written.  All our characters look great throughout Shuri #2, especially Storm (who looks quite good in ‘locks), but the design of Shuri’s outfits this issue deserve special attention.  As for the story, it’s really well-crafted, and I like that all of the major players in this issue are women, save for one tree and a raccoon, which in retrospect shouldn’t feel as remarkable as it does.  The use of dialogue in this issue is great, too, driving the story without any big fighty-fighty scenes or explosions, and our main character is charismatic and well-realized.

In short, Shuri #2 is a really great way to capitalize on the main character’s movie-driven popularity, tying in continuity elements in smart and meaningful ways (although I’m still unsure if Black Panther’s absence is the SAME absence that we’re seeing in his solo book right now, as elements of the story are still a bit unclear), with some lovely art and great design work, earning 4 out of 5 stars overall.  Honestly, I’m having more fun reading this title than some of the highest-profile Marvel heroes, which means they’re doing something absolutely right.

Great design work and strong character plotting make for an issue that hard to put down, made even more impressive by a last-page shock.