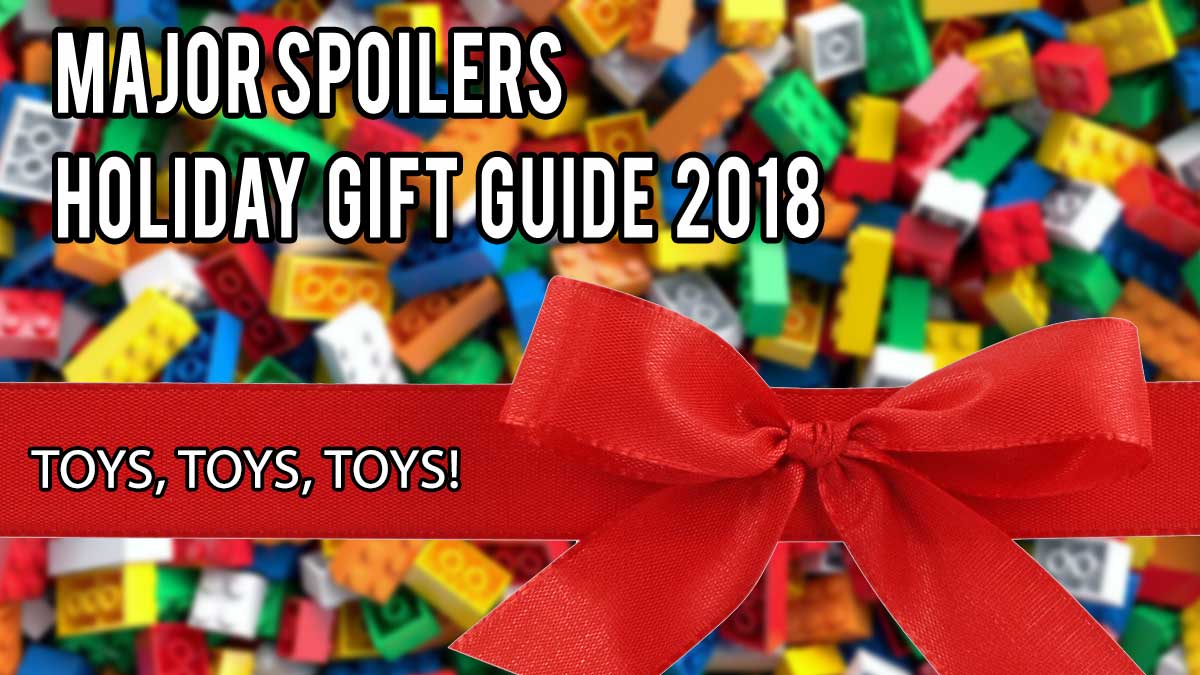 By WilsonNovember 23, 2018No Comments5 Mins Read

Spoilerites, it is Friday, and that means we wrap up our holiday gift guide with a look at some of the toys you might want to pick up this season!

Shop on Amazon
This is a great and affordable set that comes with some really cool stuff. First, there is a Batwoman minfigure!!! If that isn’t enough, there is a Brother Eye Omac minifigure as well. And Batman. The Brother Eye even has a LEGO brick that lights up! Batman’s Batwing is a cool, simple version that we haven’t seen before that can also store the new Bat-weapons the set comes with. Some very cool play features for kids. Shop on Amazon
Hasbro’s new Transformers line is hitting and is already looking like it might be one of the best in a while. Hound’s look is amazing, both in robot and Army Jeep mode. All the characters in this line have great looking battle damage paint and sculpt and the emphasis on blast “effects” and new C.O.M.B.A.T. weapons system adds some great variety to play. Any of the deluxe figures in this wave are worth getting but I wouldn’t pay more than $25 a figure. Shop on Amazon
To go with your Hound (or any other War for Cybertron: Siege toys) are the Micromasters! Hasbro has finally gotten around to putting these guys out and they’re a blast. These 2-packs give you not only two bots that can transform into their own alt modes, but can also combine to form a weapon the larger bots can use. Great fun and I recommend any of the ones released so far. Along the lines of the Micromasters, the Battle Masters (or Targetmasters as old kids like me called them) transform into weapons for use with your other Transformers. They are also the ones that come with cool looking “blast effects” that connect to them or other ports on the other Transformers. Small and very easy on the wallet (try and pay no more than $10), these little guys would make great stocking stuffers for Transformers fans. Shop on Amazon
You hear about that Venom movie? Again, a toy whose wavemates are all awesome, I’m recommending Carnage because he comes with the coolest looking accessories. A great big axe hand for one! This toy has good articulation and posability and little Carnage lovers will die for this guy (get it?). Buying all the characters in this wave will allow you to make the Build-a-Figure Monster Venom, whose is amazing as well. Shop on Amazon
I don’t have this set (yet), but it looks awesome. A giant Sentinel with electronics and a Wolverine that he kind fight? Come on, that has cool written all over it! It’s a bit on the pricier side and is an Amazon Exclusive (until every other place starts selling it) but with a 16″ tall toy, you look to be getting your money’s worth. Days of Future Past fans should be drooling. Shop on Amazon
For your adult toy and Predator nut, the newest series of Predator toys are all so great, I can’t pick only one to suggest. Highly articulated (some points of articulation are new) and detailed, these will make a great addition to your Predator and Alien collection. All are right from the Dark Horse comics, so readers will get a kick out of seeing these characters in toy form. $25 – $30 each is a good price to get them at. Shop on Amazon
Known for their incredible poseability and articulation, the Revoltech/Amazing Yamaguchi toys provide huge amounts of enjoyment. Spider-Gwen is a standout, not only as a character but as one of the coolest Spider-Man toys to come from this company. I have spent hours playing and putting her in dramatic spidey poses. She comes with a bunch of accessories and a stand. One piece is magnetic and plugs into her back so it looks like she’s sticking to the wall! Spider-Gwen will look great hanging from your tree. For older collectors only as these toys will break with excessive force. Shop on Amazon
What?! More Transformers? I know. But I can’t help myself, especially with this set. Anyone who remembers the fun had playing with their combiners as a kid will be thrilled with this box set. This Predaking is the best combiner Hasbro has made, with awesome articulation, such as ankle tilt, that will allow for cool display poses. At around $150, it is expensive but you are getting five 6″ tall toys, their weapons and parts for the combiner. Plus, each bot transforms into an animal providing hours and hours of fun for both kids and adults. Shop on Amazon
Nothing LEGO put out this year can beat the LEGO Ideas Voltron. How LEGO did it I have no idea but you build each of the five lions separately that can then be combined to form the mighty Voltron! This will take a long time to put together but it is worth it. The only thing it is missing would be minifigs of the lion drivers. At $200 currently on Amazon, that is a HUGE steal and LEGO/Voltron fans will go nuts when they find this under their tree. Just don’t get in fights about who forms the head.