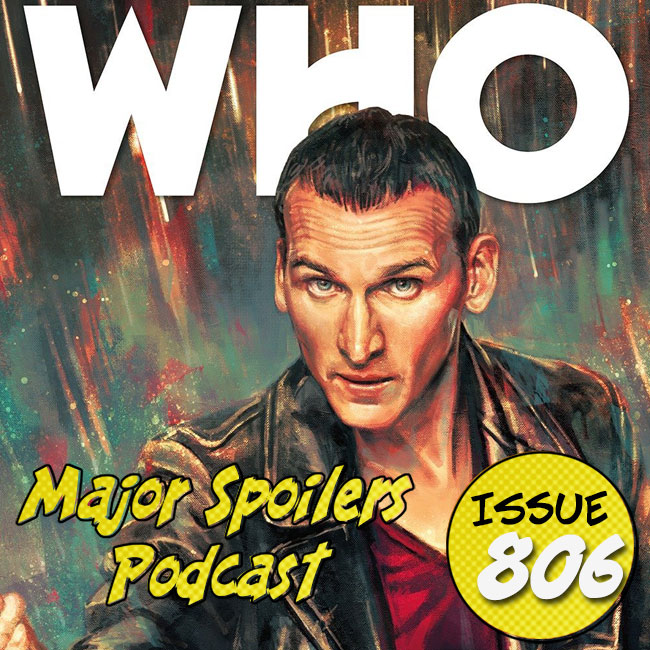 The ninth Doctor has adventures you only dreamed about, Gary Hart gets a second life, Pokemon: Let’s Go Evee is a hit, the Go-Bots are back, and PICKLE RICK! It is all in this week’s Major Spoilers Podcast.

STEPHEN
RICK AND MORTY PRESENTS: PICKLE RICK #1
Writer: Delilah Dawson
Artist: CJ Cannon
Publisher: Oni Press
Cover Price: $4.99
Release Date: November 21, 2018
The biggest pickle-sized character in pop culture comes to comics! In this reimagined version, written by Delilah S. Dawson (Star Wars) and with art from series artists CJ Cannon and Brittany Peer, Rick gets out of some much-needed family therapy time by inventing a fruit gun, which he uses on himself, and things go…poorly. Yes, cucumbers are fruits! Plus, Jaguar’s back and he’s on a mission to save his daughter.

Go-Bots have changed our way of life. Leader-1 is a self-aware fighter jet on a hostage rescue mission with his partner, Commander Nick Burns. Scooter is the personal transport and best friend to undergrad A.J. Foster. Turbo is Matt Hunter’s transforming race car in the hottest sport in America, Go-Bot Racing. Cy-Kill is the champion of the illegal, underground Go-Bot Fighting League. A sophisticated sci-fi epic from the visionary creator that brought you Transformers vs. G.I. JOE. They say they’re here to help us, but are they here to replace us?

ASHLEY
THE FRONT RUNNER
Starring: Hugh Jackman, Vera Farmiga
Release Date: Nov 21, 2018
Gary Hart, former senator of Colorado, becomes the front-runner for the Democratic presidential nomination in 1987. Hart’s intelligence, charisma and idealism makes him popular with young voters, leaving him with a seemingly clear path to the White House. All that comes crashing down when allegations of an extramarital affair surface in the media, forcing the candidate to address a scandal that threatens to derail his campaign and personal life.

DOCTOR WHO: WEAPONS OF PAST DESTRUCTION
Writer: Cavan Scott
Artist: Blair Shedd
Publisher: Titan Comics
Cover Price: $14.99
The Ninth Doctor is BACK with a brand-new miniseries: WEAPONS OF PAST DESTRUCTION! Leaving World War II behind, The Ninth Doctor, Rose and Captain Jack discover that Time Lord technology, lost in the wake of the Time War, is being sold on the intergalactic black market! Now the threat of a NEW temporal war brews on the horizon, with the Doctor and his friends caught between the twin threats of the Unon and the Lect – two species with intertwined histories who are jostling to replace the Time Lords on the universal stage. Can the Doctor stop history repeating itself? Collects The Ninth Doctor #1-5