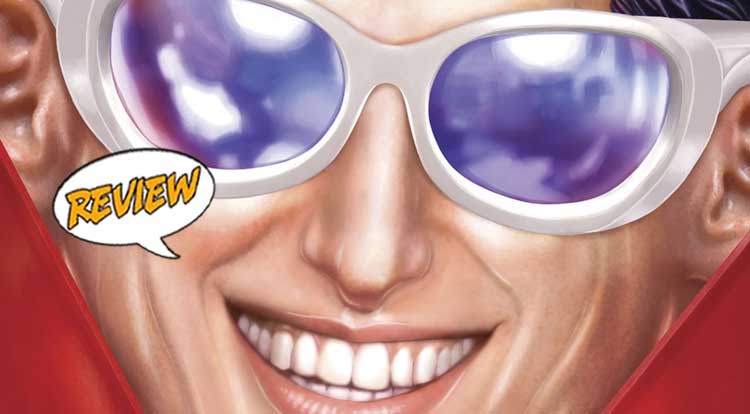 It’s Plastic Man alone versus five of the worst villains in the DCU.  Cancel Christmas.  Your Major Spoilers review of Plastic Man #6 awaits! Previously in Plastic Man:  It all ends here!  Will Plastic Man survive an attack by… another Plastic Man?  And if he manages that, will he survive a face-off against the super-villain who set up that first battle?  And what about the rest of the super-cabal standing by to see the outcome of those fights?  And then… you know what?  Let’s have some faith in Mr. O’Brian, who has eeled his way out of all sorts of trouble so far.

“I’M HARD TO KILL AND ANNOYING AS HELL.”

With Pado Swakatoon in the custody of the state and a rogue Durlan about to eat him alive, things look bad for the man once known as Eel O’Brian.  Fortunately, his own shape-shifting powers are up to the task, and he and the alien go mano-a-stretchy-mano across Coney Island, complete with rude gestures, gross alien bits and running internal monologue about visible panty lines.  Sadly, thanks to Doctor Psycho, Teel The Durlan comes out on top, and he teleports back to the Society’s headquarters…

…where he promptly alerts his comrades that Plastic Man has infiltrated their headquarters!  It’s a really subtle moment, but all the scans of the alien prove that he is what he claims to be, and that he’s not really a former mook/walking bucket of Silly Putty…  because Plastic Man is inside Psycho’s ear!  A few threats and kicks to the cerebral cortex later, Queen Bee, Psycho, Per Degaton and Amazo are out of commission, and Hugo Strange is ready to accept terms.  As the issue ends, Plas, Doris and Pado Swakatoon are reunited, Granite Janet is on the move and there’s a clear hook for another mini (or, dare we hope, an ongoing series?)

I LAUGHED AT THE ‘SHARK’ IN-JOKE

This entire series has been off-beat fun, but the cover of Plastic Man #6 ups the ante by having it look like Plas himself shifted into the comic book.  The art is really sharp throughout, and I really like the creative use of shape-shifting powers in the big ongoing battle sequence, as well as how incredibly expressive Melo’s faces are.  Pado’s sadness when thinking about Eel’s “betrayal” is palpable, while a sequence featuring a worried Obscura talking with the cocky Dr. Psycho is beautiful as well.  Best of all is the fact that Plastic Man wins the day by being heroic and annoying all at once, convincing Strange that he’ll keep coming back and making his secret cabal look foolish if he doesn’t lay off Eel’s friends and family.  It’s a clever gambit that works, and a great example of the kind of unorthodox storytelling SImone uses for Plastic Man.  There’s also a reference to one of Gail’s Twitter running gags that doubles as a kick-butt moment for our hero, as well as some witty repartee that makes me wonder about this creative team’s take on Spider-Man.

All in all, then, Plastic Man #6 serves as a nice capper to the lowbrow hijinks of this series, ending with a nice bit of closure, a makeshift family for our hero and a callback to issue #1 (as well as some pretty stellar art), earning 4 out of 5 stars overall.  I don’t know that this book is going to be to every reader’s taste, but I have to tell you: I feel sorry for the ones who aren’t on-board, because this is good stuff.

A solid ending with a built-in sequel hook and stellar art, plus a little lateral thinking by the stretchy feller.