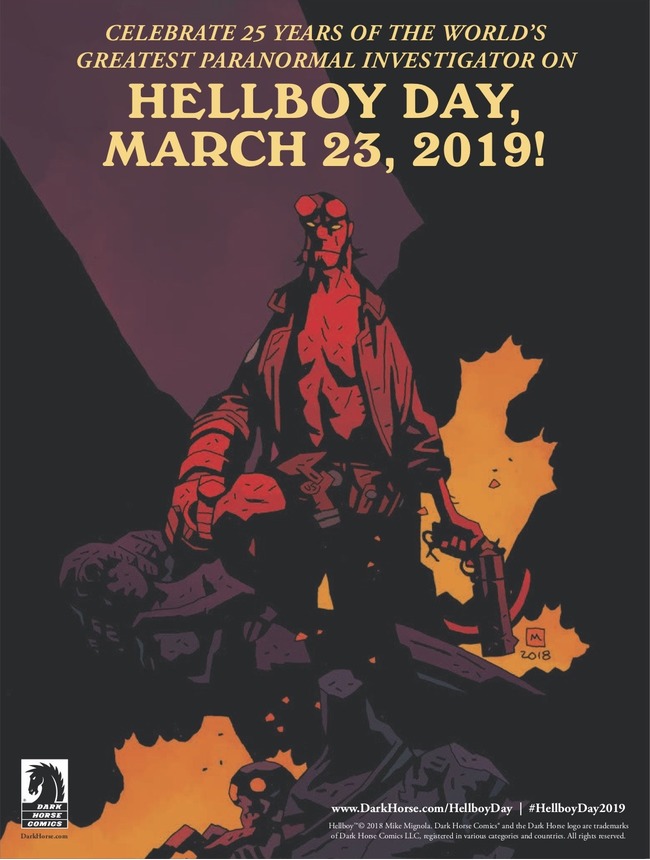 As we approach the release of a new Hellboy movie, and the 25th anniversary of the release of the first Hellboy comic, Dark Horse Comics wants everyone to get in the spirit with Hellboy Day on March 23, 2019. “When I created Hellboy way back when I never imagined he would be around long enough to celebrate a 25th anniversary,” said Mike Mignola. “I’m grateful to the writers, artists, colorists and letterers who’ve joined me in telling Hellboy stories for all these years. And, of course, so grateful to the fans. This thing could not exist without their support and it’s a pleasure every time I get to go out to meet them.” Mike Mignola will appear at a Hellboy Day signing at Earth 2 Comics in Sherman Oaks in Los Angeles on March 23.

For nearly 25 years, Mignola and a host of celebrated writers and artists have chronicled the adventures of Hellboy facing his supposed destiny as Beast of the Apocalypse, and explored the mysterious backstories of B.P.R.D. agents including Professor Trevor Bruttenholm and Abe Sapien. Hellboy’s adventures have appeared in what are known as the Mignolaverse — the strange, shared universe of comic books and graphic novels, comprised of acclaimed titles including Hellboy & the B.P.R,D., Abe Sapien, B.P.R.D., Crimson Lotus, Frankenstein Underground, Lobster Johnson, The Visitor: How and Why He Stayed and Witchfinder. Hellboy has appeared in graphic novels and comic books, prose novels and short story collections, two animated features, two live action films, toy lines and all manner of merchandise. Neil Marshall’s forthcoming Hellboy film starring David Harbour, Sasha Lane, Ian McShane, Penelope Mitchell, and Milla Jovovich will be released by Lionsgate on April 12, 2019.

I’m always down for a celebration, maybe now I can finally try some of that Hellboy cinnamon whiskey.