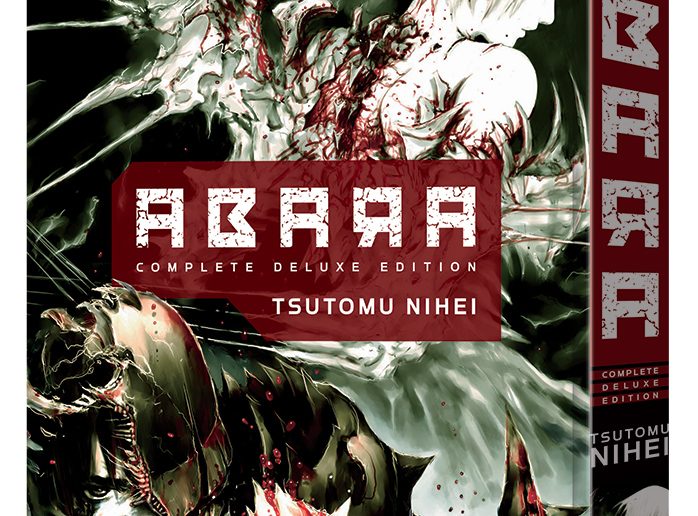 ABARA: COMPLETE DELUXE EDITION is by famed creator Tsutomu Nihei and is rated ‘T+’ for Older Teen readers. The single-volume hardcover edition will be published under the VIZ Signature imprint with an MSRP of $29.99 U.S. / $39.99 CAN. A digital edition will also be available for $19.99 via viz.com and the VIZ Manga App, as well as from the Nook, Kobo, Kindle, iBooks, comiXology, and Google Play stores.

A vast city lies under the shadow of colossal, ancient tombs, the identity of their builders lost to time. In the streets of the city something is preying on the inhabitants, something that moves faster than the human eye can see and leaves unimaginable horror in its wake. Tsutomu Nihei’s dazzling, harrowing dystopian thriller is presented here in a single-volume hardcover edition featuring full-color pages and foldout illustrations. The volume also includes the early short story, “Digimortal.”

“ABARA: COMPLETE DELUXE EDITION is a collectors’ edition showcasing one of the most visually striking of Tsutomu Nihei’s impressive body of works to date,” says Leyla Aker, Executive Vice President & Publisher. “Featuring color pages, fold-out illustrations, high-quality paper, and more, this hardcover volume will delight horror and action fans with the grotesque and fantastic beauty of the world Nihei has created.”

Tsutomi Nihei is the creator of numerous critically acclaimed manga series, including the bestseller Biomega, the Harvey Award-nominated BLAME!, and Knights of Sidonia, which was adapted into a multi-season TV animation series.