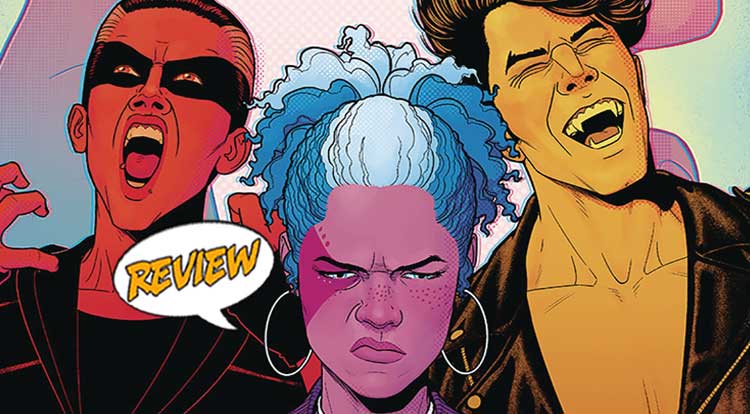 The Wicked + The Divine: The Funnies #1 Review

Before the final WicDiv arc, it’s time to have some fun…  Your Major Spoilers review of The Wicked + The Divine: The Funnies #1 awaits! Previously in The Wicked + The Divine: Every ninety years gods are reborn as dogs.

They are good dogs.

They are very good dogs.

In two years, they may have learned how to sit,..

A SORBET, TO CLEANSE THE PALETTE

Having not really paid too much attention to the solicits, I wasn’t quite sure what I was getting into with this particular one-shot.  Previous WicDiv (fans call it WicDiv, bee tee dubs) one -shots have been historical pieces that add depth and mystery to the ongoing history of the Pantheon with each one showing us a little bit more of the story behind Ananke and the previous Pantheons.  This issue, on the other hand, is a series of humor strips, starting with one called “Doggie Heaven” (which has the perfect ending and actually made me laugh out loud) to a two-parody wherein chairs get super-powers called ‘The Wicker + The Divine.’  There are a lot of lovely little asides that are actually pretty funny, with a wide variety of structures and story-types in play, including the secret origin of the crack in Laura’s cell-phone and how Matt Wilson ended up being part of the creative team.  Best of all, there aren’t any complete misses in these pages, with even the weakest story (‘5 Things Everyone Who’s Lived With Sakhmet Will Understand’) delivering strong art and a couple of pretty good laughs.

THE SCOOBY-DOO PARODY IS TOP-NOTCH

Humor is always in the eye of the beholder, but I find this issue to be remarkably approachable and amusing throughout.  The different art styles lead to a patchwork approach that helps to underline the Out-Of-Canon nature of this issue, but seeing artists other than McKelvie at work helps to show off how great his designs are.  Jamie delivers his own story in this issue, which is full of mockery of Gillen’s penchant for puns, and it’s wonderful just to look at his facial expressions in action.  The one real downside for this comic is accessibility, as it does reveal and/or touch on most of the big mysteries and secrets in the main series.  Then again, who but fans of the main title would be a jokey cartoon one-shot about the characters in said title?

With a cast of talented writers and strong art throughout, The Wicked + The Divine: The Funnies #1 runs the gamut from touching to wacky to over-the-top and back through to some of the darkest black comedy in recent memory, earning a very impressive 3.5 out of 5 stars overall.  Humor in comics can be really difficult to execute, but this issue pulls off some impressive tricks, including a Hanna-Barbera parody that manages to lovingly spoof both the book and H-B’s large array of Scooby-Doo knockoffs.  It’s probably a riff on the recent DC/HB crossovers, but it manages to be more clever than the majority of those books, and may be worth the price of admission by itself.

Humor is subjective, and this is no exception, but it's a pretty good collection of amusement, with a lot of talented creators (and Chip!)