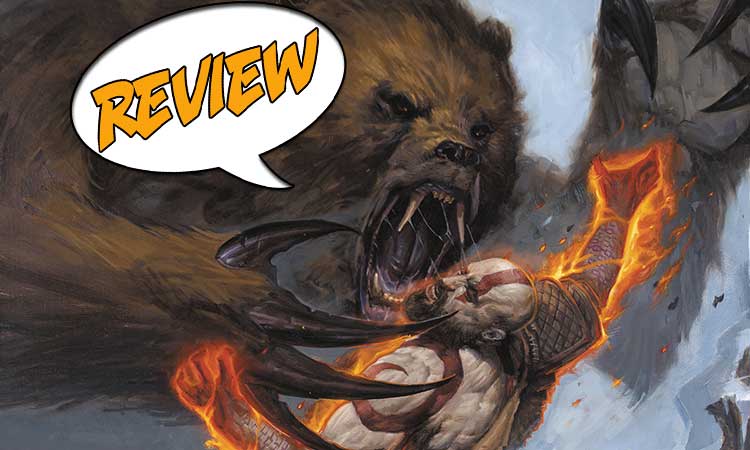 Kratos, the God of War, has fought the Greek gods to a standstill and has found a new life in a new land. But can a one-time weapon of the gods ever truly find peace, or will there always be new battles to fight? God of War #1 is out November 14th from Dark Horse Comics. A NEW BEGINNING FOR AN OLD WARRIOR

Kratos has left his homelands behind and is striving to find peace in a new role, one of father and husband. But even far removed from the Greek isles of his birth, the cold wilderness he finds himself in holds it own dangers. As Kratos arrives back to his humble lodgings, he finds his son, young Atreus, playing out great battles which fill his imagination. This would be a great point of pride for many fathers, but not Kratos.  He knows that the young boys absent had instructed him to chop wood for the fire, a task at which he had yet to begin. Kratos has no time for games, and instructs his child it is past time for him to begin to pull his own weight. As Kratos goes to the wilderness to test himself, as he does daily, his son is to spend the day chopping wood.

In the cold wilderness, Kratos searches for a challenge worthy of his new situation. When a pair of wolves threaten him, controls his own rage and walks away peacefully, seeking another challenge. It is not long before he finds one, in the form of a monstrous bear ravaging an old man. Instead of flying blindly into a rage-filled battle for supremacy, Kratos tries to control the rage, to direct it, and use it to his advantage. The outcome has consequences for more than the current battle he is waging. When he arrives home, he finds that a new threat has come for the God of War, one he must find a new way to battle.

A MASTER OF WAR, BUT NOT OF HIMSELF

As I stated before, this comic series serves as a prequel to the recently released God of War game for the PlayStation 4. As it begins, we have a Kratos who is trying to live a different kind of life with his child and his wife but is having trouble controlling his own rage. He seeks out a challenge which he can face without fueling his rage and apparently has been failing. Writer Chris Roberson (iZombie, Edison Rex) has managed to convey the internal struggle which Kratos is feeling, the war the God of War is waging within himself. Away from the machinations of the Greek pantheon, he does not have as much a need for his status as a great warrior, but cannot forget it because he has an obligation to make sure his family is protected. What does an old warrior do to try and find peace with himself? Can he find peace? Does he truly want to find peace?

The artwork by Tony Parker (Do Androids Dream of Electric Sheep, Mass Effect: Foundation) and colors of Dan Jackson (Buffy the Vampire Slayer Season 10, Letter 44) are good. Parker gets the idea of the stoic nature of Roberson’s Kratos, as well as his size and power, across with minimal effort. This is a warrior who is a force to be reckoned with and containing a power barely kept in check. But it is not perfect. There is the occasional anatomy issue, especially when the large format of an image is struggling to remain on the page, but it is negligible. He captures the barren waste of the North well, and Jackson’s colors bring the gore and mist alive with equal skill. I even want to give kudos to this issue’s letterer, John Rosnell of ComicCraft, for using a runic font for the foreign tongue of Kratos adversaries. It made it clear what sort of land the character was inhabiting and added to the telling of the story.

BOTTOM LINE: A GOOD OPENER FOR WHAT LOOKS TO BE AN INTRIGUING PREQUEL

Comic books based on video games are always a little sketchy. You have to tell a story within the rules set by an interactive medium and make them clear to the reader while not giving them complete detachment. Also, you risk stepping on the bones of the game, which will have often been played and beaten prior to an issue such as this ever making its way to the reader. The way around that conundrum is to just write a good story which grabs the attention of the fan. That said, I never have played God of War, in any of its multiple iterations, but I still enjoyed this issue. Is it as deep as some other offerings out there? No, not yet, but there is a seed of a story which offers the promise of adventure and violence, with maybe a little character development thrown in for good measure.