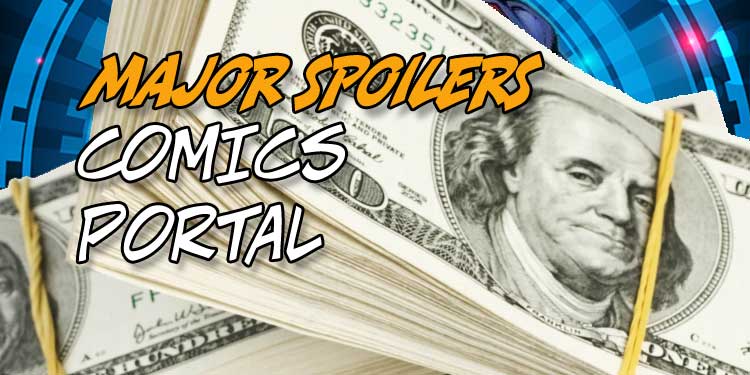 I was intrigued recently when I read a news release posted here at MajorSpoilers about Dark Horse partnering with Vanguard Visionary Associates. Now, it’s not unusual for American companies to accept funding from overseas companies—Valiant Entertainment has done that, for example.

It does show that the industry is always looking for more money so they can offset those not-so-great comics while they work on selling more successful ones! A lot of people want to work in the comics industry because they’re convinced they can make money! Well, if you’ve ever spoken with anyone who has made an Indie comic, you know that someone often has to invest a lot of their own money to make it happen! Often they don’t get a return on their investment—they just get the pleasure of seeing their name on a comic and hearing the responses from those who read it!

See, you have to pay the writer (if that isn’t you), the artist, the colorist, the letterer, the printing company, the shipping company, Diamond… just to name a few. You have to sell a lot of comics to just break even!

Now, if your property gets picked up or optioned by Hollywood, well, that helps tremendously. You get money so they can develop what you’ve created into a TV show or movie. You probably don’t have much control, if any, but that source of income can really make it possible to make more comics.

Of course, if you are Marvel or DC, and you have parent companies that are flush with cash, that’s quite a nice way to do business. Marvel is owned by Disney, one of the HUGEST entertainment corporate entities in the world, while DC is owned by Warner Bros., which is also no slouch when it comes to money.

WHICH LEADS US BACK TO DARK HORSE

However, if you are a company that doesn’t have big financial shoulders to stand on, you need investors.

Here are a couple of salient paragraphs from the aforementioned news release:

The new venture will allow Dark Horse to fully finance development of properties from Dark Horse’s extensive content library as well as cultivate original ideas and acquire material for film and television, then co-finance the production of those projects.

“We’ve had great success over the years, funding our company internally and watching it grow from modest beginnings through the hard work of our amazing staff. This new arrangement will allow us to accelerate our growth and extend our reach worldwide.”

Then, too, in an interview with icv2.com, owner Mike Richardson said Vanguard will provide  “a ‘large investment into a number of areas, including a stock purchase’… a development fund and a film fund, investment in the publishing and product divisions, and expansion of our retail efforts.”

In other words, provide more money so they can do what they’d like to do. “Take it to the next level,” they call it.

ARE COMICS A GOOD INVESTMENT?

The trick of all this is to provide profit to those investing in your company. As much as we’d love for the industry to be done just because people love making comics, creators need to pay their bills. Even companies need to do the same.

Granted, there are a lot of comics collectors who get their books signed and slabbed so they’re worth more. But you can’t run a comic company solely based on this model.

I still worry about the industry, that it’s on a decline that we may not be able to reverse. I’ve outlined my concerns along these lines many times, so I won’t do it again here. What we need, though, are investors who believe in the industry and will put their money where their beliefs are—in making great comics.

It’s interesting to me that some of these new investors come from outside the United States. China is a big investor, for example, proven by Dark Horse. Maybe other companies based in China would want to follow suit.

Are there other countries who might be interested in investing in American comics as well? At this point, I don’t think we could say no if the country is decent and would not hijack the books to promote perspectives that readers would prefer not to see. If you want to promote specific agendas, well, create your own comics and sell them online, I think.

We have to think outside the box at this point to keep the comics industry alive and kicking!