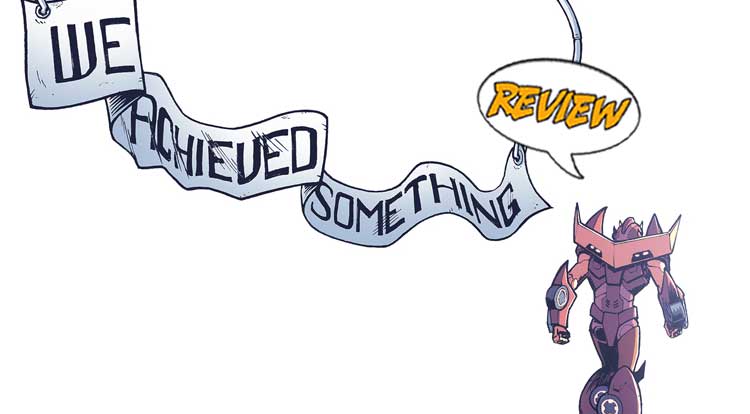 Is this the end for the crew of the Lost Light?  Well, yes and no…  Your Major Spoilers review of Transformers: Lost Light #25 awaits! Previously in Transformers: Lost Light: The quest is over, the dust has settled, and everything has changed-forever.  But before the fond farewells, before the parting of ways, before the unkept promises to stay in touch, there’s time-surely, there’s time-for one last drink…

“THERE’LL ALWAYS BE AN ENDING…”

The crew of the Lost Light, serving under Rodimus (known to some as Rodimus Prime) has finally come home… for a funeral.  The issue opens with a somber moment as our favorite former Decpticons and Autobots assemble for the funeral of one of their own, the surgeon known as Ratchet.  Flashback to the relative present, as Rodimus and his compatriot Megatron meet with Prowl, who is assessing a whole new world of sparks that might be future Transformers.  IF, and it’s a big if, they can generate the resources to keep them all alive.  To do so, Prowl wants to take the Lost Light’s special Quantum Engines and use them to generate enough Energon to save MILLIONS, and all it will cost Rodimus and company is their home.  It’s a tough decision, but one that has only one possible answer for beings like this.  To prepare for it, the crew is given one day, one last jaunt together, one last hurrah for their companionship before they all move on.  Swerve franchises his bar (unsuccessfully).  Nautica write the story of their life.  Rewind becomes so obsessed with recording all that they’ve found that he corrupts his own mind.  Megatron is finally brought to trial for his centuries of war crimes.  Ultra Magnus finally gives up his armor and embraces Minimus Ambus.  Whirl passes in and out of prison.  Ratchet and Drift finally get “married”… and eventually Ratchet dies.  As the funeral breaks up, Rodimus arrives and he and Drift wonder if their last plan worked…

That last plan, by the way, is brilliant, and the structure of the story allows us to see what happened to nearly everyone from the 100 issues of continuity in this title, including referencing fallen friends like Trailcutter, and the final page reveal that they managed to create a Negative Space Wedgie that created an alternatre version of the Lost Light and crew years ago on their final flight gives us both closure and whatever the opposite of closure is.  The art is pretty phenomenal in this big finale, making every cast-member perfectly recognizable (even if you’ve only seen their toys) and giving incredibly fluid and readable expressions to metal faces page after page.  Rodimus and Megatron’s goodbye is a heartbreaker, both visually and in terms of the story, but it is, as Megs reminds his friend, less than his murderous actions deserve.  Even Rung, who technically doesn’t exist anymore (this book got pretty complicated, but in a good way) gets his due in these pages, and relationships that have been building for issue after issue get resolution that don’t cheat, thanks to the years of story shown in these pages.

I haven’t been a regular reader of this book, but I’ve been checking in ever since the days of ‘More Than Meets The Eye,’ and the final pages of this book are just perfect, with the dupli-crew setting out in the Lost Light to explore a whole new universe.  When pressed to estimate how long it will take, Rodimus estimates that it will be… Forever.  And the whole crew is fine with that.  It’s a moment that brought a little mist to my eyes, making it clear that Transformers: Lost Light #25 was a winner, with stellar art and a story that manages to have it’s metaphorical cake and eat it too, earning a well-deserved 5 out of 5 stars overall.  A new Transformers era is dawning, but it’s nice to see that the “Crusadercons” last story is as touching, as effective and as metatextual as all that has come before.  It’s the ending this book deserved.

An unusual ending for an unusual book, featuring a rare example of a creative team both embracing and rejecting the logical end of the story at the same time...