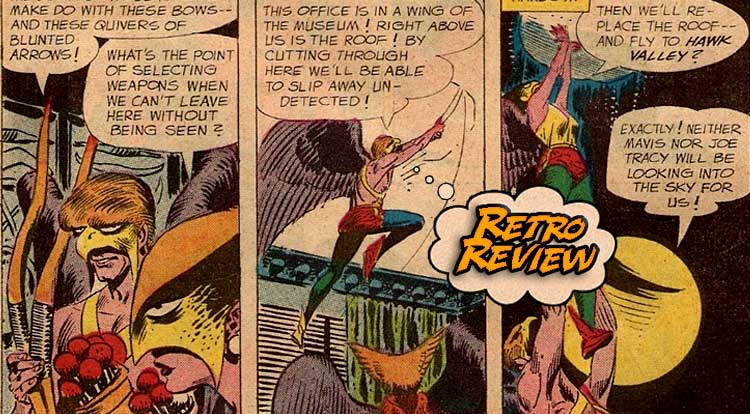 Retro Review: The Brave and The Bold #34 (February/March 1961) #HawkmanDay

The Silver Age brought new incarnations for many of DC’s Golden Age heroes, but none went through as big a change as Hawkman!  Your Major Spoilers (Retro) Review of The Brave and The Bold #34 awaits! Previously in The Brave and The Bold:  When superhero comics fell out of favor circa 1951, a number of books just… stopped.  All-Star Comics, the home of the Justice Society of America was suddenly a Western title, while the solo titles for Flash, Green Lantern and others were replaced by science fiction, romance, tales of the uncanny and such.  By 1956, though, the tide had turned back, and DC relaunched The Flash with a new look, a new identity and elements of science fiction baked in.  Green Lantern followed in 1959, with a full-fledged revamping of the JSA as the Justice League of America in 1960.  DC’s was pretty much batting .1000 when this issue brought back another Golden Age hero.  Originally the reincarnation of an Egyptian pharaoh (however that word is spelled), Carter Hall used ancient weapons to fight evil as Hawkman in the pages of ‘Flash Comics’ starting in 1940.  Twenty years later, his origins were… a bit different. Like Flash and Green Lantern before him, things have been modernized for Hawkman.  The fanciful stories of reincarnation were eschewed in favor of harder science fiction, positing our Hawkman and his beautiful wife/partner as policemen from the distant planet Thanagar, sent to Earth to apprehend a dangerous alien criminal.  Their target is a shape-shifter named Byth, who can hide perfectly in any environment, but the Hawks are prepared to bring him down, thanks to their telepathic Absorbascon-scanned knowledge of the planet. Keen-eyed Spoilerites will notice that Hawkman’s helmet is missing it’s distinctive wings in Brave and The Bold #34, a change from the winged cowl that his Golden Age counterpart had (and that he himself will have before he joins the Justice League later on.)  Honestly, it makes his headgear look somehow incomplete.  Other than that, though, the uniform is identical to the one that Carter Hall wore in the Golden Age.  Given that the writer of this book, Gardner Fox, also created that iteration and that the artist, Joe Kubert, was one of the artists most associated with that character as early as 1945, that it unsurprising.  Respecting matter of jurisdiction, Katar Hol arrives in Midway City and visits the local police commissioner to explain why he’ll be operating in their city to find their quarry.  The commissioner responds by offering to set them up with false identities (!), replacing his retiring brother as the chief curator of the local museum. No muss, no fuss, no complications!  The Hawks become “Carter Hall” and “Shiera”, they get new jobs, free dresses and take over the retiring man’s lease all in the space of five panels.  (Gardner Fox was not a man who wasted story space, as his work fitting any number of JLA and JSA heroes into intricate plots will attest.)  Reasoning that their target, Byth, is adept at escaping the advanced technology of their world, Hawkman and Hawkgirl decide to pursue him with the antiquated weaponry from their museum…  which seems illegal?  I don’t know.  But, using mace, bow and retarius (which Fox helpfully explains is the type of net used by Roman gladiators, one of many such bits of helpful and interesting information revealed in his tales), the winged wonders engage the shape-shifter, now on an Earth-bound crime spree. Byth escapes and his trail goes cold until Hawkman spies a Thanagarian bird, unknown to humans, in a diorama at his very own museum!  Discovering from Mavis, the woman who assembled it, that it was based on a picture from her own studies.  Realizing that Byth is taunting them with his presence, Hawkman again engages the villain and again loses him, but their final combat is the most dangerous of all.  In the form of a giant Brontadon, Byth tries to kill innocent humans, only for Hawkman to outsmart him by hiding a special chemical formula INSIDE his weapon.  Brontadons, you see, eat metal, an ability which Byth counted on as a counter to Hawkman’s mace!  Smaaaart. With their target in custody, The Hawks return to the Commissioner’s house only to have him request that they stay on an protect Midway City, but Katar and Shayera surprise him by revealing they’ve already requested detached duty from their supervisors.  Presto!  The DC Universe has new heroes!  This, incidentally, is one of the stories that made it necessary for the Silver Age heroes to be on a completely different world, in a parallel universe, from their counterparts, as even Barry and Hal’s origins don’t create the complications that this story does.  Still, it’s a really fun story full of history, science fiction and a lot of lovely Kubert Hawkgirl, leaving The Brave and The Bold #34 with a more-than-deserved 4.5 out of 5 stars overall.  This issue and others like it are part of the reason that I tolerate the endless attempts to make “fetch” happen at modern DC with Hawkman, as there’s always a chance that we could get back to something this well-written and drawn and return the Hawks to the top of DC’s food chain once again.  Happy Hawkman Day, Faithful Spoilerites!

This issue and others like it are part of the reason that I tolerate the endless attempts to make "fetch" happen at modern DC with Hawkman, as there's always a chance that we could get back to something this well-written and drawn and return the Hawks to the top of DC's food chain once again.  Happy Hawkman Day, Faithful Spoilerites!