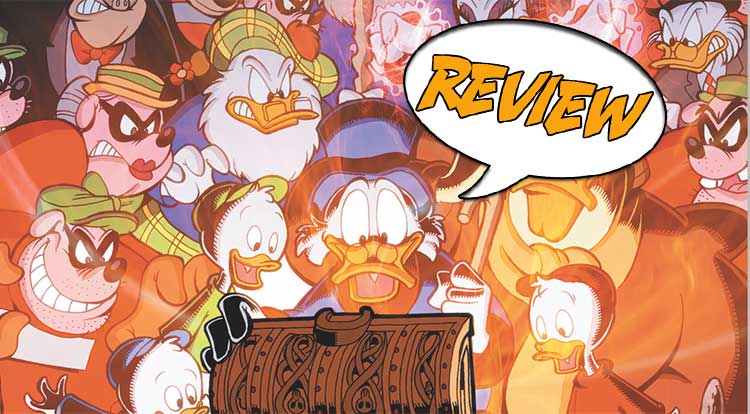 Remember those long ago afternoons when you would rush home from school, turn on the TV, and be wrapped in the comforting arms of afterschool cartoons?  I remember getting home and watching Ducktales, Darkwing Duck, Rescue Rangers and more, and now IDW Publishing is bringing those memories back with DISNEY AFTERNOON GIANT #1. Previously in DISNEY AFTERNOON GIANT: The Disney Afternoon was a programming block of cartoons which ran in many areas of the country. For over 6 years, there was a two-hour block of Disney cartoons to enjoy, and they ranged from Gummie Bears, to Ducktales, to Darkwing Duck and more. For many young people of the day it was a big part of their childhood, and now IDW has decided to recreate the feeling with a new series in the Disney Comics imprint.

Our first show… uh… story, is a Ducktales adventure called Rightful Owners. It begins with a bang ad Scrooge McDuck jumps from an airplane being flown by his pilot, Launchpad, and get this, the plane is NOT crashing! No, it seems that McDuck has decided to make a big entrance to celebrate an exhibit opening entitled “A Lifetime of Adventure, The Scrooge McDuck Collection” which is opening. Landing outside of the museum with tons of onlookers and his nephews looking on, Scrooge begins to calculate the profits at fifteen dollars a person. But his mental calculations are interrupted by John D. Rockerduck, a financial competitor of McDuck’s. But Scrooge refuses to let him rain on his parade as he takes his family into the exhibit to regale them with some of his more action-packed adventures. But after regaling them with the stories, they return to the mansion, an interesting discussion begins among his young relatives. It begins during a game of Ducks and Danger, as Webby is the games-master, she tells her players, Huey, Dewey, and Louie, their adversary has laid down his weapons, and asks that the party return all of the artifacts they took from his people. The boys are rather startled by this, as the artifacts are treasures they had collected over the course of their role-playing adventures. But Webby explains that it was still taking things which didn’t belong to them. This turns into a discussion where the kids realize that their Unca Scrooge had done the same sort of thing, whether he had permission to ultimately bring the items back to Duckburg or not. As they kids realize that they should convince Scrooge to return the items he has collected over the years, Scrooge is watching a newscast where Rockerduck is proclaiming he will return all the historic artifacts he has taken over the years to their rightful owners, and challenges his fellow Duckburg philanthropist to do the same! So beings an adventure where Scrooge accepts the challenge and begins to return the items. But is it all in the name of philanthropy, or is some dark villain concocting a plan to gather some of the rarest items in the world for themselves? Find out more next issue!

The second story is called Worldwide Rescue and stars the cast of, you guessed it, the Rescue Rangers! After a quick flashback where Gadget performs possibly her first rescue as a young mooseling, we lash to the present where the Rescue Ranger Team, Chip, Dale, Gadget. Monterey Jack and Zipper are descending into a sewer system to collect the first part of the Super-Key. Before long, they are confronted by a pack of alligators. But Zipper has it under control, and as a matter of fact, he fought off a horde of mysterious creatures earlier in the day, so the gators are nothing to him. As a matter of fact, the reason for their current adventure is tied into that incident, as the group had watched a newscast covering how crazed animals have been gathering together in groups and attacking people and towns. The news startles Jack, who runs out. When the rest of the team catches up with him, he tells them of a creation from his younger adventuring days, The Animal Rescue Signal, or ARS. Whenever animals were in trouble or in danger from humans, the signal would deliver a frequency which would give them the strength and power to save themselves.  But it was quickly realized it could be used for evil, so Gadget’s father, a contemporary of Monterey Jacks, locked the machine away and entrusted Jack with the key. But now the Rescue Rangers must find the key and ensure that the ARS is still locked away. Before the end of the chapter, they must face enemies powered by the very item they hunt, and rescue one of their own!

MORE THAN A NOSTALGIC TRIP

In the first chapter of “The Rightful Owners” writer Warren Spector (Ducktales, Darkwing Duck) and artist Leonel Castellani (Chip’n’Dale Rescue Rangers, Marvel Super Hero Squad) pull off a great feat of bringing not only the look, but the feel of the classic DuckTales cartoon. As much as I have enjoyed the new version of the cartoon, this feels much more real to me. The art style is much more reminiscent of the original series, and even the style of writing is in line with the original subject matter. I could easily have seen this being played as a multi-part episode back in the day. Great for the fans of the original and something new to check out for the fans of the current series.

“Worldwide Rescue” was a little different. Writer Ian Brill (28 Days Later, Farscape) stepped away from the style of the original cartoon series and threw in multiple flashbacks. In addition, Dale was a not exactly nice, and it seemed that some of the characterizations may have been geared toward the older fans. That said, it starts out as a fine story and one that I enjoyed. It just was not in the mold of the original cartoon. That said, artist Leonel Castellani (Disney Adventures, Uncle Scrooge) does a great job with the art, and there is a lot of action packed onto the pages.

GREAT COLLECTION, BUT WITH A CAVEAT

For fans old and new, this is a Disney title worth picking up. You get two serialized stories, and the promise for the future is for different tales to be added in a sort of rotating basis. This is great, if you don’t already have them. You see, both of these stories were already printed during the time that Boom Studios had the Disney license. So if you are a Disney fan and have them, you might just double check to make sure you don’t already have titles which featured these stories in your collection. But, either way, it is a read and I look forward to seeing what will follow these stories.