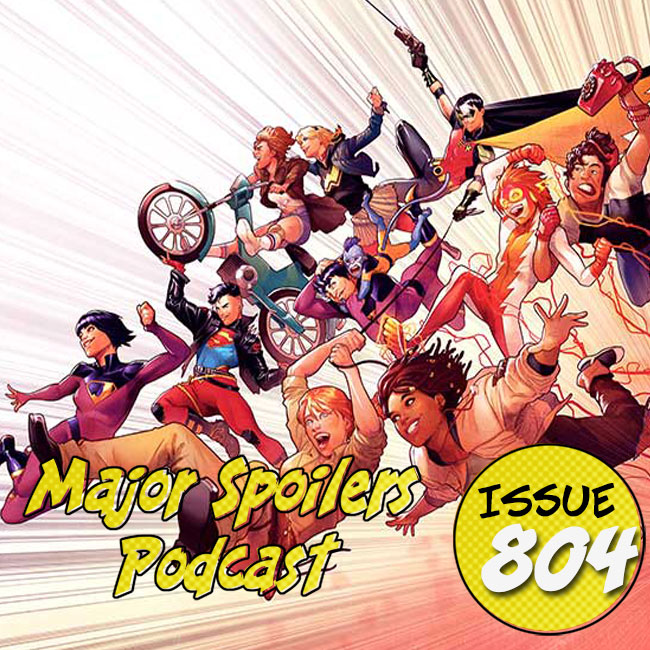 We love comics, and you do, too, which is why we’ve loaded this episode of the Major Spoilers Podcast with twice the comic reviews and we’re still keeping with the low, low price of FREE!

STEPHEN
THE EMPTY MAN #1
Writer: Cullen Bunn
Artist: Jesús Hervás
Publisher: BOOM! Studios
Cover Price: $3.99
Release Date: November 7, 2018
SOLICITATION: The nation is in the grip of a terrible pandemic. The so-called Empty Man disease causes insanity and violence. Government quarantines are mandatory.
One of the afflicted is Melissa Kerry, and the next step should be to quarantine her—but those who enter quarantine are never seen again. Melissa’s family won’t let that happen. All they have to do is care for her, keep her worsening condition a secret—and they’ll do anything, trust anyone, to keep her safe.

It’s three startling Terrifics tales, kicking off with a deadly nightmare at Stagg Manor! When a plot to steal Plastic Man’s powers goes awry, the Terrifics’ new home and everyone in it are at the mercy of stealthy plastic monsters. Looks like Sapphire picked the wrong day to host a Halloween dance for her Stagg Industries internship program! Next up, discover the secret origin of Java the caveman, and the secret he’s keeping will shock you. Last but not least, we uncover Tom Strong’s hidden adventure in the Dark Multiverse—hold on to your holy socks!

20/20 VISION! The future has arrived! The return of Tony Stark’s smarter brother, Arno. A classic Iron Man villain reappears. And a new alliance is forged that will plague Shell-Head for years to come.

RODRIGO
DINOSAUCERS #4
Writer: Michael Uslan
Artist: Jason Millet
Publisher: Lion Forge
Cover Price: $3.99
Release Date: Nov 14, 2018
The Secret Scouts and the Dinosaucers team up against the Tyrannos in an all out war! With a plan up their sleeves to exploit the Tyrannos' weakness, can the Secret Scouts and their new allies take down Rex and his armada? Meanwhile on Reptilon, Quackpot unleashes a secret weapon against the Resistance-but Princess Dei has a secret weapon of her own!

GOD OF WAR #1
Writer: Chris Roberson
Artist: Tony Parker
Publisher: Dark Horse Comics
Cover Price: $3.99
Release Date: Nov/14/18
Kratos, God of War, has returned! His war on the gods of Olympus long past, Kratos builds a new life for himself in the remote Norse wilds. Seeking to put the rage that defined most of his life behind him, Kratos inadvertently sparks a feud with a mysterious cult of berserkers after attempting to save a stranger being mauled by a monstrous bear. But for the former Ghost of Sparta, no good deed goes unpunished.

ASHLEY
LAGUARDIA #1
Writer: Nnedi Okorafor
Artist: Tana Ford
Publisher: Dark Horse/Berger Books
Cover Price: $4.99
Release Date: Dec 5, 2018
Set in an alternative world where aliens have come to Earth and integrated with society, LaGuardia revolves around a pregnant Nigerian-American doctor, Future Nwafor Chukwuebuka who has just returned to NYC under mysterious conditions. After smuggling an illegal alien plant named ''Letme Live'' through LaGuardia International and Interstellar Airport's customs and security, she arrives at her grandmother's tenement, the New Hope Apartments in the South Bronx. There, she and Letme become part of a growing population of mostly African and shape-shifting alien immigrants, battling against interrogation, discrimination and travel bans, as they try to make it in a new land. But, as the birth of her child nears, Future begins to change. What dark secret is she hiding? Written by Nnedi Okorafor, Hugo, Nebula and World Fantasy Award winner (Who Fears Death, Binti, Akata series) and illustrated by Tana Ford (Silk, Duck!), the team behind Black Panther: Long Live the King #6.