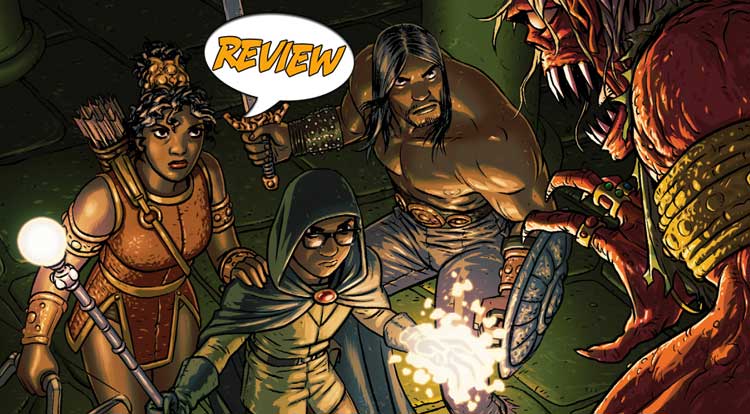 Things get weird… by not being so weird?  Your Major Spoilers review of Doom Patrol #12 awaits! Previously in Doom Patrol: Something normal is happening to the Doom Patrol.  Which means not weird, since their own normal is very weird.  There are mysterious forces at work, unseen hands rewriting history, and the change is so gradual, the team doesn’t even necessarily see how much they are changing…

“SOME STORIES HAVE BEGINNINGS AND ENDINGS… THIS STORY HAS NEITHER.”

We open this story a few issues in the past, before the beginning of the big ‘Milk Wars’ crossover madness, with Sam (Doom Patroller Casey’s EMT partner) and his family trapped in an alternate world known as the Daemonscape.  His son Lucius has become a powerful spellcaster/reality warper, and he and his estranged wife Val are forced to get by on their own skills.  (She was an archer back in Scouts, while he is trained in martial arts.)  As the story continues, it’s clear that something about Lucius is driving this reality, and Sam is bound and determined not to return to his ways of violence.  They make their way into a daemon’s keep, D&D style, using mystical artifacts that they find along the way to get by, only for the end of their quest to be… The Doom Patrol itself?  Leaping through a portal, they arrive to help the titular heroes in the ‘Milk Wars’ (which ended some months ago, and this issue has actually been resolicited/delayed more than once in the interim) before returning to find that the mysterious mystic woman in the wings is… Lucius’ grandmother?

I KIND OF FORGOT THIS WAS STILL ONGOING

I feel kind of bad, as one of the big fans of the ‘Young Animal’ imprint, to have forgotten that this book was still ongoing.  Doom Patrol is, in many ways, the cornerstone title, but repeated delays allowed it to slip my mind.  This issue reminds me of what I like about Gerard Way’s curated imprint, though, taking on a pretty solid version of D&D, right down to the issue’s cover resembling an old-school module cover.  I enjoy Nick Derington’s art in this issue, as it works hard to maintain the right balance of mundane and mystical, reminding us that even in this swords-and-sorcery world, these people are just a normal family at their core.  The moment where Sam decides he must act is remarkably dynamic, perhaps even super-heroic, and his command of facial expressions is top-notch.  This issue’s script is likewise strong, and the delays don’t really hurt comprehension, as it’s a diversion from what has come before (and perhaps a hint of what’s to come?)

BOTTOM LINE: GLAD I PICKED THIS UP

I’m not always a fan of role-playing scenarios in comics, mostly because they’re either not good RPGs or they’re not good comics, but Doom Patrol #12 manages to do both justice, with strong art, compelling characters and a story I hope we’ll see more of in the future, earning 4 out of 5 stars overall.  I’m sad that this first era of Young Animal was so short-lived, but I’m still hopeful that we’ll get more interesting stuff as they transition into their next phase.

Well-conceived and well-drawn, with some smart use of D&D "shorthand" while maintaining roots in reality. I have missed this book.