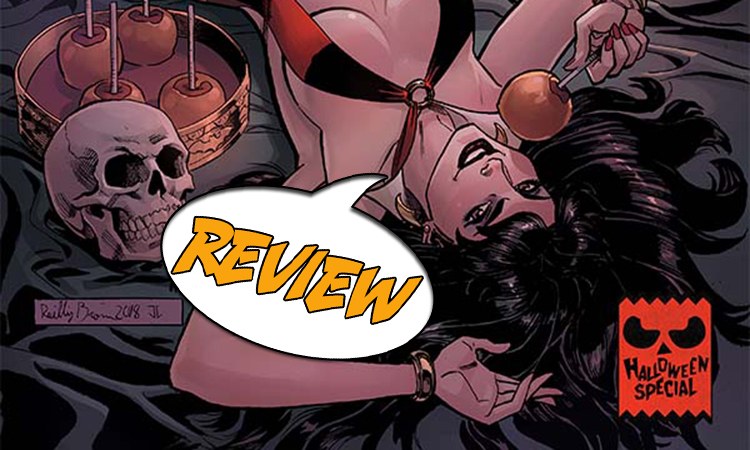 That vivacious vixen of the vampiric persuasion, Vampirella, storms into your Halloween reading list with a pair of Halloween themed stories in the Vampirella Halloween Special from Dynamite Entertainment. Is it worth dropping into your trick or treat basket? Let’s find out. Previously in VAMPIRELLA: Originally created by the legendary Forrest J. Ackerman and artist Trina Robbins for Warren Publishing back in 1969, she was transformed into a horror comic host by the late Archie Goodwin and then moved on to be a feature character in her own stories. An over the top character that people either love or hate, Vampirella continues to thrill fans today with her comics published by Dynamite Entertainment.

In the depths of Hell, the evil Lilith meets with Chaos to discuss their latest plan; it is time for Hell to come to Earth. This is that one night where the denizens of the dark can cross over into the mortal realm and make it their own. The creatures of the night have gathered, amassing their forces for the assault, and only one being can stop them, the daughter of Lilith, Vampirella!

While the darkness gains strength, Vampirella is in Salem, Massachutes. Her mission, to ensure that the 500,000 plus people who travel to Salem to celebrate Halloween make it home alone. Garbed in her fighting outfit, she perches atop a roof, vigilant for signs of trouble.

Meanwhile, Trina, a friend of Vampirella’s, is contemplating her current plight. She had rented a room in Salem with the intent and purpose of gaining the time to write and paint, to unleash her creative soul. It seems, however, she has not been as productive as she wished. On the bright side, Halloween is also her birthday, and she is meeting her friends to celebrate it. Arriving at their designated meeting spot, her friends Forrest and J are somewhat disappointed. She was to play the Jeanine to their Ghostbusters, and Trina’s choice of Negan is unexpected. There is not much time to fret over the choice of costuming though, as the forces of Hell have arrived, with Vampirella has arrived close behind. The blood flows quick and early as Trina, Forrest, and J make a run for it, leaving Vampi to face the hordes of Hell alone. Can Vampirella stop the attack, or will Hell take up residence on YOUR street!

In the second story, Vampirella prepares to great the neighborhood trick or treaters in a costume of her own that takes a sexy spin on the fifties middle-American housewife, but the kids aren’t impressed. The retcon of costumes isn’t what they wanted, and Vampirella quickly learns that disappointing trick or treaters can lead to one’s home and lawn being covered in toilet paper! Vampi decides to avenge herself on the children, and in the process, learns the meaning of Halloween. No, not really, but blood does flow by the conclusion of the tale!

A VERITABLE VINEYARD OF VINTAGE FUN!

The first story of the issue, “Happy Death Day, Vampirella” is brought to us by writer Scott Lobdell (Uncanny X-Men, Marvel Comics Presents) and artist Rapha Lobosco (James Bond, Hack/Slash vs Vampirella), and gives us a Vampirella in her hunting gear, fighting the good fight.  Let me say first, this is not going to win any awards. The primary story is good, the primary story is fun, the primary story has also been done so many times there are probably collectors out there who gather nothing but “Hell Comes to Earth” stories. But you’re not here for the primary story, it is the secondary story that is more entertaining, and that is a story of a creative team paying tribute to the creators of Vampirella, horror fans and Halloween in general. There are a load of Easter eggs in this story, so many so that even my own encyclopedic knowledge of all things horror probably missed a few. The first is the supporting characters names, Trina, Forrest, and J, giving a nod to the creators of Vampirella. Then there are the obvious pop culture references to the Ghostbusters, The Walking Dead, other comic and television horror hosts, classic horror movies, literature, ancient childhood songs with dark roots, other horror properties… I could probably write another article just notating them and listing their inspirations. I mean, the names would have been enough, but I saw what I believe to be a character design reference to the great Saturday Night Dead show! Sure, it may have just been that the design is so ingrained into pop culture now that it was a given, but it still sparked a great cool factor. Lobdell did manage to take a tired plot line and insert some life into it, with Lobosco bringing it to life and making it all flow.

The second story is much different and takes a more comedic view of Halloween. In “Trick or Treat” Scott Lobdell and Blake Northcott (All New Michael Turner’s Fathom, Executive Assistant Iris) give us a Vampirella who just wants to please the kids. It’s funny, and on a level speaks to how real life fans react whenever there is a change to a character, even when it is temporary. It is a very short tale, and the jokes are funny and the situation overall is a good read that you’ll enjoy. Artists Anthony Marques (Superman, Red Sonja) and Marc Deering (Star WarsL Dr. Aphra, Smallville: Season Eleven) channel a great, lighthearted style to the story. There is a tinge of Saturday morning to the art, and a wholesome, yet scary, look to a redesigned Vampirella. It is a fun a quick read that will make you laugh.

And I have to mention the cover by Reilly Brown? He also did the great Bettie Page Halloween Special cover for Dynamite Entertainment, and he captured a sexy and playful Vampi on the cover to this book. He is quickly becoming an artist I look out for.

I haven’t really read much Vampirella since my favorite uncle gave me access to his old Warren magazine collection when I was just a wee-little ghoul, but she is one of those iconic character you know on sight. She is, in many ways, the definition of sexy Halloween.