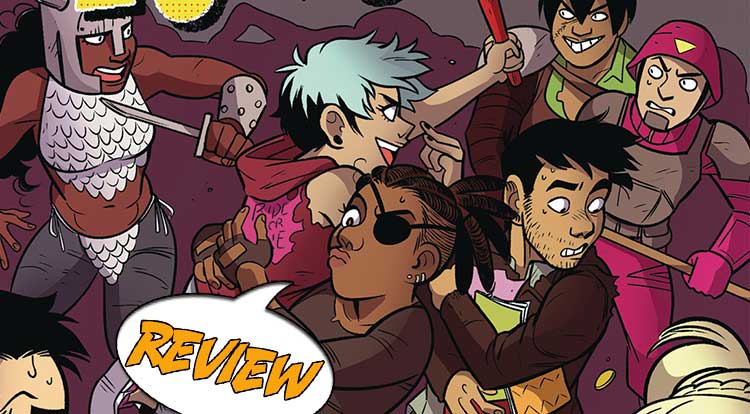 The post-apocalyptic world of The Long Con has it all – in-fighting; badges; celebrities of all stripes; zombies – can Dez and Victor dodge all this to get to Hall C? Find out in this Major Spoilers review of The Long Con #4 from Oni Press. Previously in The Long Con: Victor, Dez, and Loren (the plucky intern) flee the Skylarker authorities and go to the Salad Saloon to meet up with a couple people (former creators with Dez’ company) to get badges. All hell breaks loose as the authorities crash in, announcing the arrival of the Special Guest, apparently killing the badge forgers in the process.

The Long Con #4 is a story I keep coming back to. I have a feeling there are way more references in it than I am catching. Even so, it is a wild and crazy ride, and it is terrific fun seeing what happens next. You know. When cons go bad…

We open on the chaos at The Salad Saloon with shooting and screaming and a bunch of bewildered con attendees. Victor tries to convince the Skylarkers that they weren’t associated with the guys who just got shot. But then a trio of women in fantasy style armor and weapons, albeit a bit tattered by now, show up to attack the ‘Larkers. It basically turns into a barroom brawl. (Oh, I get it – Salad Saloon!) Victor grabs the badges, there is more fighting, and our heroes escape. And we find out the women were Battle Foxes – from a 90’s franchise – who hate the Larkers.

Cue the flashback to a Skylarks episode. This one involves a planet with two different races who cannot get along, failing to make peace until the Skylarks show up. Not only that, but the problem is solved by teen whiz, Midshipman Chip Nimitz. That flashback leads deftly into the flashback of the Long Con pre-Apocalypse, when Dez is showing Victor around. They’re trying to get coffee, but the lines are insane. Dez has the idea to sneak through the “staff only” tunnels between halls. This is also where the celebrities hang out, including Flix Blixby, who played Chip Nimitz. He’s been trying to get Dez to move on his graphic novel series, that he hasn’t even pitched (much less written) beyond the title. The run-in gets antagonistic until it is interrupted by Anton, an old friend of Dez, who go-karts the VIPs around the Con.

Meanwhile, back in the present day, there are checkpoints at Hall C, and the fake badges may not hold up. Victor remembers the tunnels! But who should show up but the Larkers who were after them last issue. Loren starts a distraction and continues it by shouting, “That thing you all like is problematic!” The humor is delightful and satisfying. But the distraction is enough to get them into the tunnels where Victor is immediately tackled. It’s Flix Bixby! Who is a disturbing shade of purple. Long story short, the tunnels are still where the celebrities hang out. The flesh-eating, practically zombie celebrities, that is. They’ve eaten their way through the D-list and are almost through the C-list, and that’s where poor Flix is. It is his time. Flix tries to sell out Dez and Victor – but hey, they have B-list badges! To tie this one up neatly, Anton shows up in his go-kart to save the day.

OVER THE TOP – IN A GOOD WAY

The art covers a lot of ground in The Long Con #4. It is busy, and I would bet there are Easter eggs in it. The opening scene is the panic at the Salad Saloon, and it is a busy scene with a lot of people, many in costume. One thing I did not notice the first time through was that the Battle Foxes are making their entrance in the background. The big fight scene is terrifically nutty. Loren and Dez jump right into it. Victor, somewhat befuddled, is just swept along. Loren continues to occasionally use emojis to communicate, which is still surprisingly effective besides just being funny.

I like the depiction of Flix Bixby. We see him as the “love him or hate him” child prodigy character, and then as the adult has-been actor. He’s used as the point of the cut between the TV episode and the recent past, tying the show back to a poster at the Con. This convention has been used previously in the book and I like it for tying the transitions together. The celebrities we meet there come around again in the last act, and that is a treat as well. The celebrity tunnels are vividly colored – purple backgrounds lit by flaming candelabras which provides a rich orange contrast.  And there are little touches all over that you just have to catch on a second or third read.

I vaguely remember starting out by wondering what happened here, and that almost feels like it’s the MacGuffin in The Long Con #4. And you know what – I’m okay with that. The journey is so incredibly wild, full of weird twists that somehow retroactively make sense, that I can’t wait to see what happens next. What are things like in Hall C?

I vaguely remember starting out by wondering what happened here, and that almost feels like it’s the MacGuffin in The Long Con #4. And you know what – I’m okay with that. The journey is so incredibly wild, full of weird twists that somehow retroactively make sense, that I can’t wait to see what happens next. What are things like in Hall C?