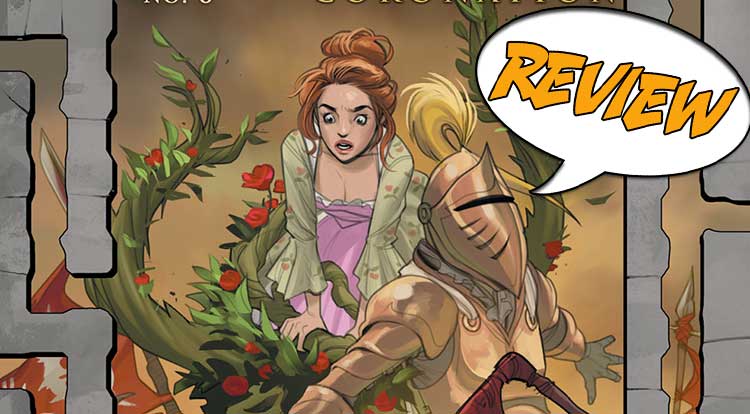 Organizing a revolution is tougher than you think, especially if you’re only a few inches tall. Once that’s underway, will Skubbin actually betray Maria? Let’s find out in Jim Henson’s Labyrinth: Coronation #8 from BOOM! Studios. Previously in Jim Henson’s Labyrinth: Coronation: Maria was in dire trouble again and, in the process of freeing herself, met up with a new companion Cible, a tiny caterpillar who thinks she is a revolutionary. They meet back up with Tangle, the sentient rosebush, and in their wandering, find their way into a child’s nursery – a place Maria cannot change, because it is from Albert’s mind. The toys in the nursery turn on them and attack, and who should show up to rescue them but Skubbin, the Goblin Knight! After getting away, Cible leads them to the safety of – the Great Goblin Rebellion?

Jim Henson’s Labyrinth: Coronation #8 starts out with Cible in the spotlight as she announces that Bunderghast the Invincible is here! While this gets the goblins’ attention, they’re soon distracted by sharing rumors among themselves. Maria boosts the little caterpillar up and Cible claims that she herself is Bunderghast, which does not impress them. She then claims Maria is a wizard. Maria draws a crevasse with her chalk and this does the trick. The goblins are impressed…and then want to find some ale. As if this weren’t enough chaos, Tangle wanders in for hugs. Cible has a quiet moment of disappointment – she tried to get the revolution going but couldn’t. She confides in Maria show she came about her reputation – a clerical error. What’s really sweet about this scene is Maria also admits to pretending to be something she wasn’t actually. And, in a thoughtful moment, she advises that you have to know who you are before you can become something else. This is a profound moment, and a very nice touch to the story.

Skubbin wanders off by himself, feeling that he cannot betray Maria. A mosaic face comes to life to taunt him by telling him he cannot avoid his destiny. Maria finds him and confides in him that she misses her life as a wealthy woman, even while she also feels that there’s nothing so important to her as her little boy.

With a little bit of foreshadowing, we flashback to the movie story – we’re getting to the point where Sarah gets caught in her dream. But that’s a quick cut – back in the goblin cave, Beetleglum shows up to warn them that the King is coming. But first to appear is Septimus, the monster. Cible urges on the attack against him and in the confusion, Maria and Skubbin slip away. Maria sees a bright light at the end of a tunnel and wants to go that way. Skubbin tells her that it’s a trap, and urges her back to the water, where the gondolier shows up. As he pays for her passage to get away, the Owl King shows up to say he’s proud of Skubbin for being his son.

Feeling betrayed, Maria runs off, toward the bright light and suddenly finds herself in a fancy drawing room in a lovely dress, surrounded by the wealthy. And then Albert is there, with a masquerade mask, telling her he treated her abominably, but now they are here. Together. Forever. The parallel with the movie is undeniable here. We have wandered about, but now we are at a crucial decision point for Maria. What will she do?

There is a lot of flavor in the art of Jim Henson’s Labyrinth: Coronation #8. The Labyrinth has enough craziness in it that the art plays a huge part in keeping the storyline comprehensible. It can’t be easy – the characters vary in size from tiny Cible, to the goblins, to Maria (normal human size). They interact variously, and it takes some thought to figure out how to make it work effectively. And all of these characters are quite expressive, even when they aren’t human.

The color tone is darker in this issue, fitting for being underground, but I think it’s also a reflection of the overall mood. We’re getting to the point in Maria’s story where she’s probably going to be just about at her lowest. There are deep colors and some fantastic shadows in the ink. It’s particularly effective to set off the ending when Maria runs off into the light, which is almost blinding in comparison. And the normalcy of the dream world she finds herself in, especially since it reflects the very ordered world of the 18th century, is a stark contrast with the ever-changing Labyrinth.

BOTTOM LINE: THE PLOT IS PICKING UP SPEED