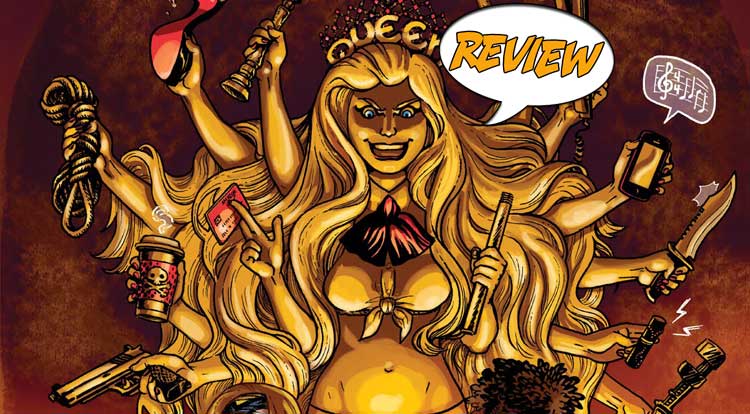 Previously in Empowered and Sistah Spooky’s High School Hell: Empowered and Sistah Spooky’s hellish high-school ordeal climaxes with a brutal hallway battle pitting the nearly powerless pair against Spooky’s final surviving classmates, who have ascended to blonde godhood after inheriting all the hellscape’s infernal magic.  Can our hellbound heroines finally “graduate”-or will they be lethally expelled?

NEVER MAKE A DEAL WITH THE DEVIL

It’s a long-lasting piece of Empowered continuity that Sistah Spooky sold her soul for phenomenal mystical power, along with a number of other girls in her high school.  Those girls have returned with a vengeance, and over the first few issues of this series, have destroyed each other systematically until only two remain: Ashley and Ashlee, a mean queen bee and her lackey.  Things get serious as they turn their attention to Spooky and Emp, but before Ashley can kill the girl she hates more than anyone else, she is stabbed in the back (literally) by her own lieutenant.  With all the power hers, Ashlee also tries to kill our heroes, torturing Spooky with memories of her lost love.  Unfortunately for our would-be world-beater, the one thing her new endless well of magic can’t fix is her own self-loathing.  This leaves our heroes to finally come to terms with the fact that high school is officially over forever, and allowing them to move on with their lives as friends.

McNeil’s art is a whole different world from that of Adam Warren’s art in previous volumes of Empowered, but that’s not a bad thing.  It’s an issue filled with people being flooded with demonic magic, and the wild eyes and rough edges really channel that angry energy visually.  There’s also the hilarious visage of Spooky’s I.S.P. (Infernal Service Provider), who looks like Principal Belding with a flaming goat-skull for a head.  Even Empowered, who can occasionally look like a scary sheep-woman under Warren’s pen, looks remarkable, and the sequence of Sistah Spooky imagining her fallen girlfriend Mindf**k is really touching.  Warren’s story balances those emotional moments with over-the-top battle sequences and some lovely self-deprecating dialogue throughout the story.  The reveal of the root of Ashlee’s emotional issues makes me a little bit uncomfortable, and some of the moments of self-realization feel a little too pat, but overall, it’s a strong story and a good final chapter.

My relationship with ‘Empowered’ has been up and down over the years, with the best of the series celebrating the human elements of superheroing.  (The worst is the early focus on bondage, which is something the series is still growing out of.)  Empowered and Sistah Spooky’s High School Hell #6 makes for a nice final chapter with wild-and-crazy art that nicely encapsulates it’s war-for-all-the-magic-marbles-in-a-hallucinatory-hellscape-high-school premise, earning 4 out of 5 stars overall.  I wouldn’t recommend it for all ages, but it makes for a nice meta take on superhero comics, with a surprising and effective emotional core.

Unexpectedly touching stuff with some expressive, exciting art and a nice focus on the under-served Sistah Spooky.