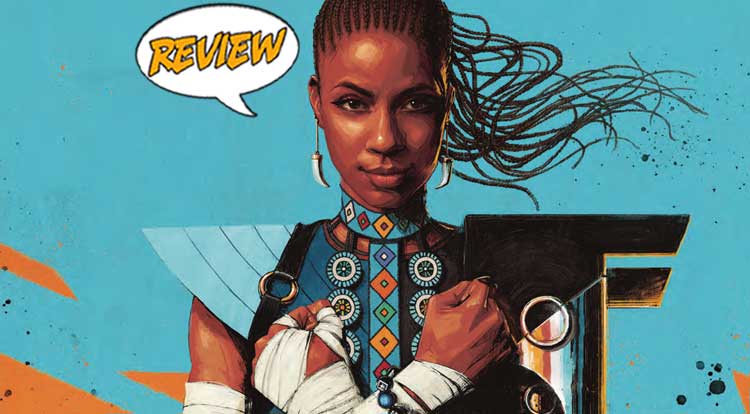 She was once the Black Panther herself, but she’s still the princess of Wakanda!  Your Major Spoilers review of Shuri #1 awaits! Previously in Shuri: The Black Panther has disappeared, lost on a mission in space.  And in his absence, everyone’s looking at the next in line for the throne.  But Shuri is happiest in a lab, surrounded by gadgets of her own creation. S he’d rather be testing gauntlets than throwing them.  But a nation without a leader is a vulnerable one – and Shuri may have to choose between Wakanda’s welfare and her own.

As this issue opens, we get a succinct one-page recap of Shuri’s history in the comics (which is already super-complicated, despite debuting in 2005) which makes for a really solid recap.  Cut to the present, as Shuri prepares to launch a rocket of her own design into space, piloted by big brother Black Panther and former Avenger Eden “Manifold” Fesi.  The launch goes as planned, thanks to her technological wizardry, but an errant wormhole causes the two Avengers to disappear.  Two weeks later, Shuri is incredibly worried about her brother’s whereabouts and unsure how to proceed, when her mother calls her to the sacred Baobab tree.  There, she finds that Queen Ramonda has convened a council of woman, reviving an ancient tradition of Wakandan lore.  We meet each of her council, followed by the reason that they’ve called Shuri before them: They want her to once again become The Black Panther and protect Wakanda!

This issue is visually quite stunning, channeling the color palette of the ‘Black Panther’ along with some lovely art.  Romero’s pencils aren’t the photo-realistic style of a Mike Deodato, instead offering a more impressionistic take on Wakanda, but they’re really lovely.  A sequence of Shuri trying to gather her thoughts while testing a pair of nanotech wings she has built is just beautiful, showing off figure work, technology and the landscapes of the capital city all at once.  The final page splash is incredibly dramatic as well, adding more heft to the dramatic reveal.  As for the story, this is an issue full of character work, setting up a possible Shuri/Manifold romance, without short-shrifting the Black Panther, the Queen or Shuri’s own heroic nature, making me hope this comic can break the 12-issue barrier that so many Marvel books recently haven’t.

In short, Shuri #1 nails what is so much fun about the character in her movie incarnation, creates conflict that makes perfect sense while maintaining some really strong, attractive art and earning 4.5 out of 5 stars overall.  The use of Marvel continuity is excellent, the dialogue is strong and the main character is clearly able to carry her own weight as a hero.  Five dollars says she’s an Avenger before the Black Panther sequel comes out.

An issue that draws upon the mythology of the movie but makes sure to explain everything you need to know, including why our main character is amazing.