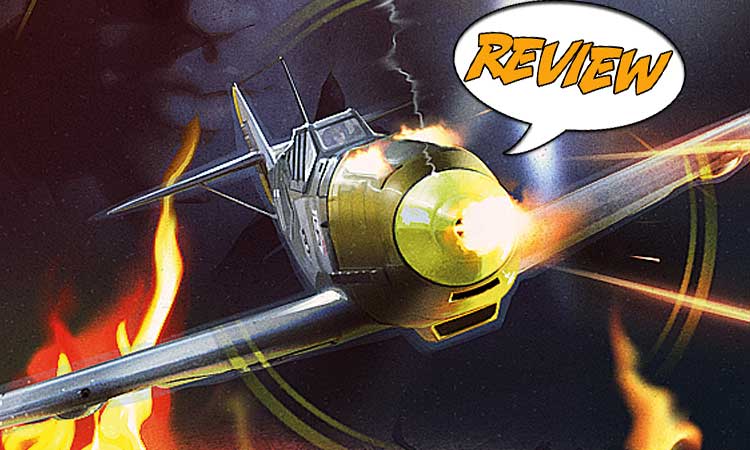 Rivers of London: Action at a Distance #1 Review

Peter Grant, Detective Constable in London’s Metropolitan Police, and wizard in training, has finally gotten his mentor, Thomas Nightingale, to open up. Digging through old files, we learn more about him, and the Nazi murderer who came to London in 1957… RIVERS OF LONDON: ACTION AT A DISTANCE #1

London’s Metropolitan Police has a Special Operations Unit that specializes in dealing with all things magical. In charge of this is Thomas Nightingale, one of the most powerful wizards of Europe. (His work dates back to the British Colonial Empire.) Through the eyes of his trainee, Peter Grant, we get a look into some of the secret work he’s done over the years.

MEMORIES OF A SERIAL KILLER

Rivers of London: Action at a Distance #1 is a look into the history and past case files of Thomas Nightingale. As someone new to these stories, I had no problem with jumping in here and immediately getting immersed in this world. Nightingale is dressed in plainly one of his best suits, and the occasion is the funeral of an old friend (Angus Strallen). He encourages Peter to look at certain case files related to the man.  As he leaves, there is a little foreshadowing – his dog wants to come along, but can’t, and Nightingale’s maid Molly is at the ready with a leash and collar belonging to Hesperus, a past dog we see later. At the funeral, we meet Dr. Jacqueline Frye, the widow and also an important character in the mystery.

She gives Nightingale an old photo of him with Strallen, from WWII, and we see a flashback to when they met. Strallen has a train full of wounded men and it is stranded in a tunnel. A Messerschmitt has got them pinned down. Nightingale, who has come to deal with it, walks out of the tunnel and, as the plane approaches him to gun him down, he holds up a hand and the plane loses power, plummets to the ground, and explodes. Cutting back to Peter Grant (a very deft cut indeed), he comments on the “official” version of the story as well as Nightingale’s. But this is all merely an intro to 1957, when things get even more interesting.

Molly, who has not spoken a word this issue, brings in a card from a visitor – Strallen. Nightingale immediately invites him to have some tea (and perhaps a little something stronger). We briefly meet Hesperus, his dog at the time, and Strallen settles in to tell his story. Like Nightingale, he is working for the police, although not in London. He was following a suspect, Professor Uwe Fischer, who slipped away in the crowd. He’s a German national, ex-Luftwaffe, now engaged in defense work.

Strallen goes into more detail. Like any mystery story, this requires a fair amount of background, but the plot never drags, and it doesn’t feel like an information dump. The details unfold in a steady pace advancing the plot the whole while. Strallen already knew Dr. Frye at this point, and she is the one who suspected something was up. A young lady came to see her with a story of being sexually harassed at work (with no recourse – 1957, after all), and being deathly afraid that something worse would happen to her. Dr. Frye believed her, and told Strallen. And, shortly thereafter, that young woman turned up murdered.

But Fischer had an iron-clad alibi for the night – he was at the factory which was full of witnesses. As Strallen and Frye quietly started investigating, more young women died. Dr. Frye set herself up to be a potential victim, and Fischer attacked her. As Strallen drove up to get him, Fischer gestured and the car stopped dead, much like the plane we saw earlier. Fischer got away, but Strallen arrested him – only to find he had an alibi, and someone from higher up ordered Strallen to leave him alone.

Now he has followed him to London. Nightingale makes plans to track him down, and the two friends go out for a night on the town. As they leave the jazz club, though, there is a commotion in the neighborhood. A young woman has been murdered.

The characters are front and center in Rivers of London: Action at a Distance #1 which fits, considering this is a mystery story. It is dramatic, and it is all about the interplay between those characters. The backgrounds tend to recede even further into the background, but still they are present – we never lose sight of where we are.

This is a story full of interesting characters. The maid, Molly, fascinates me. As she is drawn, she has a very intense face, and she doesn’t say anything. She was with Nightingale in 1957, as she is now, and neither of them look as though they have aged any significant amount in the intervening years. In contrast, Jackie Frye has aged, and I appreciate that she looks like an older version of the younger woman we also see.

There is some terrific use of panels and storytelling through the art. One such sequence is when Nightingale takes down the Messerschmitt. There is a mix of long shots, and super close-ups of the faces of Nightingale and the pilot. For an action sequence, this makes it intimate and almost quiet. The pace picks up as the plane spirals out of the sky, culminating in the explosion. Very cinematic.

There are some other brilliant images, such as the scene of the first victim’s body, under water, with Strallen and a constable reflected in the ripples. Or Fischer, caught in the car headlights, using his magic before fleeing. Or the shot of Strallen, reflected in Nightingale’s wine glass and lit bit firelight. It’s all so very interesting to look at.

BOTTOM LINE: A STRONG SET UP FOR A TENSE MYSTERY

It looks as though Rivers of London: Action at a Distance #1 is setting up to be a police procedural crossed with fantasy mystery, with emphasis on the police procedural. I like that we’re learning more about the main character’s history, and I love that we’re following a mystery from a different era. The way it is presented, the entire premise feels plausible, which I also appreciate. I highly recommend this book.