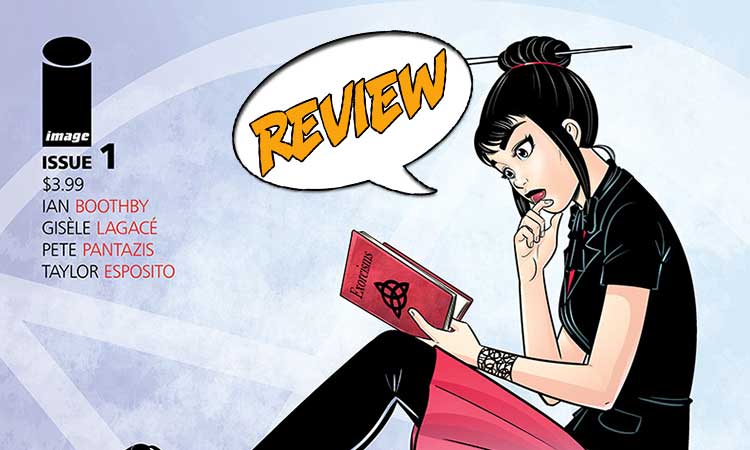 When things from the underworld mess with your life, who are you going to call? Harrow and Harrow, the Exorsisters, have got the goods! Meet two of the most interesting detectives you’ve ever seen in Exorsisters. Kate and Cate Harrow are not only investigators, they are experts in the occult, able to travel to Hell without batting a perfectly lined lash, and keep their cool in the oddest of circumstances.

A JUICY LITTLE MYSTERY IS JUST THE BEGINNING

It is a beautiful summer day as Exorsisters #1 opens on an outdoor wedding scene. Glenn and Gloria are tying the knot, and right as Glenn starts to recite his vows, he is wrapped in mystical chains, and a large, red devil dramatically comes and drags him through the ground into Hell. You probably weren’t expecting that for an opening. I sure wasn’t, but let me tell you, it pulls you right in. Back in the present, Gloria, still on the scene, is relating her story to our title characters, along with the fact that no one else seemed to notice what was going on. Kate and Cate appear to be twins, but could not be more different in personality. Cate is prim, proper, and all business; Kate is rock-and-roll and not at all shy about helping herself to cake and champagne.

The sisters start investigating. Glenn had been spending some time on occult message boards. Apparently demons hang out on message boards. (That’s a nice touch; some days I could totally believe that.) He was also complaining about his boss. This strikes Gloria as a bit odd – they were partners in real estate.

We cut briefly to a completely different scene. A woman, sitting alone in a bar, makes a small bet with a man that she’s done something worse than he has. We don’t hear her details, but he leaves, and she has a bottle of Jack Daniels for her wager.

Back at the Harrow and Harrow office – which is distinctly divided into halves as different as the two women – Cate and Kate prepare to go to Hell. Glenn, as it turns out, is not there. But we have enough time in Hell to see just how unflappable the investigators are, and I’ll talk it more in the next section.

The girls take Gloria to a house on her list of properties. It’s been impossible to sell. And it turns out that Glenn is holed up here. If you were expecting the happy ending to the mystery, hold on. There is also a demon hiding in the closet. It turns out the Glenn had a plot. The demon is a sorrow sucker – giving wealth to someone as long as it has a supply of sadness to feed from. Glenn’s plan was to leave his fiancée heartbroken, feed the demon for months, and – basically – profit. The demon also gave Glenn the power to cloud people’s minds. At least it did right up until Gloria went from sad to just plain mad. No more sorrow – no more power, and no more money, for Glenn. But hey, he still has a demon hanging around, enjoying his sorrow.

It’s a nice, tidy, kind of fun mystery, and that resolution makes this book a good one for getting a taste of what the series has to offer. But it doesn’t just end there. Remember the woman in the bar? That is Kate and Cate’s mom.  And in two short sentences, we not only learn that the girls are not sisters – Kate is Cate’s soul. But they need to talk about the end of the world.

There is a lot going on in Exorsisters #1, and the art fits the story very well. The mundane is drawn perfectly acceptably, but where the art shines is in the otherworldly. In part, I think it’s because of the huge contrast it sets up. The real world is just very pretty, normal, almost a bit flat, so when the first devil shows up, he pops. To say nothing about his two chain-spitting horned toad minions. Those are words I never expected to use all in the same sentence. But they’re pretty awesome.

When Kate and Cate show up, we get some visual hints that they are close, despite also being as different as they can possibly get. Both favor a red and black color palette, but where Cate has a neat skirt, fashionable jacket, large bow at her neck, and tidy hair, Kate wears shorts, a t-shirt, and a black bomber jacket. They’re clearly twins, and boy do they have a lot of personality.

Another thing I have to highlight is the humor. There is plenty of it, and much of it is visual and it’s a treat to see. For example, the conjured doorway to Hell, flaming and bordered with skulls and bones turns out to be about a foot and a half tall.  And yes, hijinks ensue. The various demons and devils in hell are imaginative and weird. One I love, and was totally not expecting, was a large red devil in a flowered dress, purple bows on its horns, and holding a doll. It tried to possess a little girl, but something went wrong, and she is possessing him instead. Let that sink in for a moment. Yeah. Weird, but ever so cool.

BOTTOM LINE: A SOLID OPENING FOR A NEW ONGOING SERIES

I enjoy paranormal investigations, and Exorsisters #1 delivers a solid story with a couple fascinating characters. I love how the girls take everything in stride and don’t take any nonsense. The concepts of Hell and the sorts of devils that exist there are entertaining. It’s a well-rounded book and I look forward to the next issue.

The yin and yang of devil hunters, the Exorsisters have got your back!