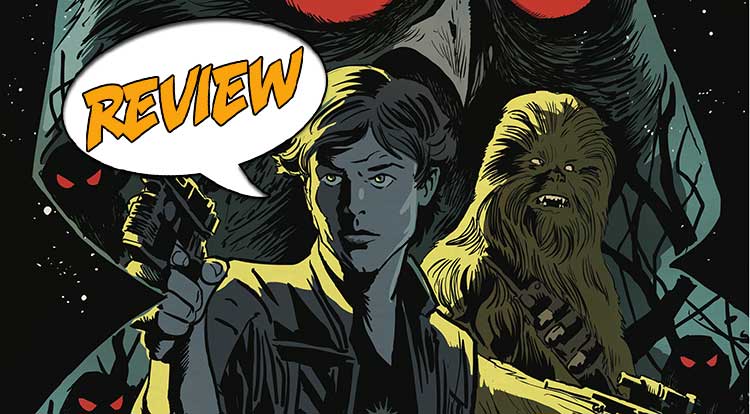 Lina Graf and her crew have crash landed on the ominous lava-covered planet of Mustafar, and Imperial troops are hot on their trail. Hey, look! I bet they can take refuge in that cozy looking castle! What evil awaits in Star Wars Adventures: Tales from Vader’s Castle #3 from IDW Publishing. Previously in STAR WARS ADVENTURES: TALE FROM VADER’S CASTLE: While on a mission for the Rebel Alliance, Lina Graf and her crew have crash landed on the lava world of Mustafar. The hostile environment of the planet forces them to work their way toward the only visible shelter in the area, a large fortress surrounded by Imperial troops. To urge her crew along, Lina relays a story each issue which gives a glimpse into their own situation.

STORM THE CASTLE IF YOU WANT TO LIVE!

With a large, imposing fortress their only chance for survival, Lina and her crew take on a group of Stormtroopers as intent on stopping them from gaining entry as the team is on entering. Gee-Three, ignoring orders from his commander, takes on the Stormtroopers in hand to hand combat as the rest make their way in and try to decide their next move. But her crew is shaken up by their rapidly changing situation and Crater suggest that a story might calm their smallest team member’s nerves. Acquiescing to the request, Liane tells the story of what was supposed to be a simple delivery job.  The woman needed a rare piece of art delivered to the Kiva system, but was unable to find anyone willing to take the job. The destination moon, it was said, was haunted. But at one million credits, spooks and ghouls meant nothing to an intrepid pilot like Han Solo. It was supposed to be a blue milk run, deliver one statue, collect the pay; nothing illegal or that would get them in the sights of the Empire. But Chewbacca knew that nothing was ever that easy, and even as the Millennium Falcon landed on the world of Rendel, he could see that this was no exception. The whole of the planet was overrun by giant thorns. Making travel through it hazardous. When Han and Chewie find the remains of an old friend’s spaceship, you would think they would know this wasn’t an ordinary job. I mean sure, when that old friend’s failing tactical droid warns them to beware the Emerald Witch, surely they could get a clue, right?

Uh, you have heard of Han Solo before, right?

NOTHING IS FOR FREE, ESPECIALLY ADVENTURE!

Writer Cavan Scott (Doctor Who: The Ninth Doctor, Pacific Rim: Aftermath) stretches his story within a story framing technique into another issue, and it works great. The Rebels, crashing on Mustafar and unknowingly chagrin straight into the rancor’s lair that is Darth Vader’s summer home, have well-developing tale themselves. Stretching out over the previous issues, it highlights particular aspects of the crew and shines a spotlight on Lina as the storyteller. This opens up the opportunity to allow her to serve the role of a custodian of stories as she tells the tales which entertain and educate her crew in a time of trouble. This particular tale, of a seemingly easy job which goes sideways, is especially good as we get to see a young Han Solo and Chewbacca as they ply their trade in a galaxy far, far away. This Han is cocky and self-sure, eager to make a fast buck and not think through the consequences. At the same time, we see that devotion to his friends that will carry him to adventure in the movies and beyond.  This story has the feel of the old Marvel series. It is not hard sci-fi, but it has that healthy helping of fantasy that made those original stories so magical. The idea, as presented, would not work if you sat down and tried to break the plot with science, but taken with a little suspension of disbelief it is fun. It doesn’t take itself too seriously and gives a great little story that fits this Halloween season we are entering.

Despite being the third issue, the stories spotlighted in this title are bite-sized little windows into the world of Star Wars that are not a critical as some others. You don’t worry about how this affects the continuity, where it should be in the timeline, or if it is apocryphal or not. You sit back and enjoy it. The Han and Chewie story presented here has just a touch of tall tale to it, but that’s okay, because even in a galaxy far, far, away you got to have your legends.

STAR WARS ADVENTURES: TALES FROM VADER’S CASTLE #3 is a family-friendly fun issue which will be a nostalgic love letter to fans of the original Marvel series and a delight to new fans. Get your local comic shop to smuggle one onto your pull list.

A great little tale surrounded by an intriguing framing story, this is one to pick up for fans old and new.