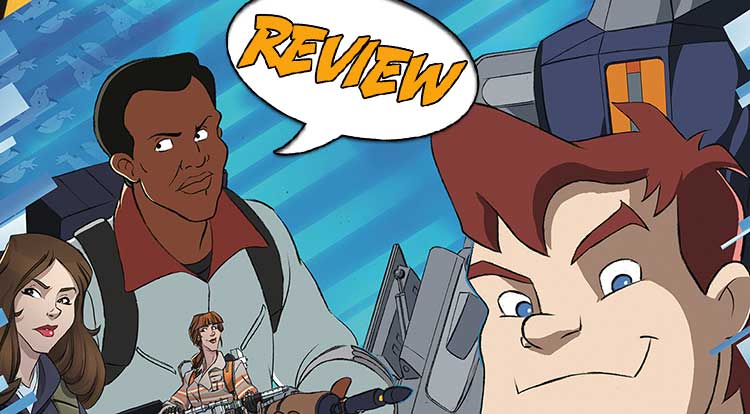 After the goddess TIAMAT pulls a card from the bottom of the deck and scatters our heroes across the multiverse, efforts to scoop up the rampaging spirits look grim.  Gather round, then, as Ghostbusters from across the dimensions mix and match their way to victory in Ghostbusters Crossing Over #7. Previously in Ghostbusters Crossing Over: When the collapse of the containment unit in issue #1 sent a cavalcade of spooks and spirits across the multiverse, who ya gonna call?!  In response, different Ghostbuster teams from across that multiverse come together to re-capture these ghostly ghoulies.  Everything goes swimmingly until wily goddess TIAMAT springs a trap and shuffles those teams.  Read on then, in Ghostbusters Crossing Over #7 how those teams get along as they go ghostbusting!

WHO YOU GONNA CALL?

In that glorious year of 1984, the pinnacle of all the moves, greater even than Back to the Future (gasp!), The Terminator (what?!) and Buckaroo Banzai ok, I’ll give you that) was Ghostbusters!  Let me hear you say ‘yeah!’  The Ivan Reitman helmed horror/comedy/action/science fiction classic captured my teenage mind and heart like no other movie in that year, and I haunted our little one screen theatre like Banquo’s Ghost.

Looking back, all the ingredients were there for at least three or four further movies out of the premise.  And then Ghostbusters 2 (boo!) came along.  Fortunately, even though it wasn’t well received in some quarters, the all-female reboot did decent business and helped keep the flame burning.  In the end, Ghostbusters remains an excellent film with a compelling storyline, great special effects and a great sense of pace.

Of course, there have been the cartoons (Real Ghostbusters is surprisingly great) and, as you can see with this review, comics.  Lots and lots of comics.  So what is Ghostbusters Crossing Over #7?

Faced with the task of recapturing the spiritual escapees from the containment unit, who have spread across the universe, the call went out to the different Ghostbuster teams across the dimensions.  The early issues saw those teams fanning out, recapturing ghosts.  The intervention of the goddess TIAMAT however, through a wrench into the works, shuffling the teams into different configurations, with the management of new team dynamics adding to the job at hand.

The opening pages of Ghostbusters Crossing Over #7 shows us these newly reconfigured teams battling to recapture the ghosts.  The artwork ably conveys the otherworldly nature of the realms they have ventured in, contrasted nicely with the return to the more prosaic material world once the ghosts have been recaptured.  There’s some witty banter between the newly recombined teams, before they are all drawn to a climactic confrontation on the last page of the issue.

My main problem with Ghostbusters Crossing Over #7 is the expected one.  With so many characters, and so many story strands, if you haven’t read this issue before, you’re going to be lost.  Sure, the basic concept is there – fun characters chasing ghosts while packing nuclear reactors on their backs.  What’s not too like there?  Writer Erik Burnham does an amazing job of giving everyone a chance to shine, and pushing the story forward, but unless you’ve been with this arc since issue #1, you may find it lacking.

What isn’t lacking is the artwork.  Again, there are dozens of characters here, mostly riffing off the same inspiration.  Dan Schoening’s artwork and ability to differentiate his characters from their prime templates is used to excellent effect throughout Ghostbusters Crossing Over #7.  I was a little amused that the Prime Ghostbusters (from the original movie) look a little like they were inspired by dogs, but that’s just me.  I really appreciated seeing the Real Ghostbusters again, sufficiently so that I’ve been inspired to dig out the original cartoons.

BOTTOM LINE – THEY SLIMED ME!

In the end, Ghostbusters Crossing Over #7 delivers what you’ve come to expect – lots of actions, lots of amusing banter, and a Big Bad at the end that keeps upping the stakes.  My scores only reflect the fact that I came to this series late; had I been in from the beginning, I’m sure the numbers would’ve been a touch higher.  However, unlike 1984, when once a movie had finished at the theatre you were left twiddling your thumbs, in this internet age, back issues are only a click or two away.  There’s enough in Ghostbusters Crossing Over #7 to suggest that hunting down the back issues will be well worth the effort.

In the end, Ghostbusters Crossing Over #7 delivers what you’ve come to expect – lots of actions, lots of amusing banter, and a Big Bad at the end that keeps upping the stakes.