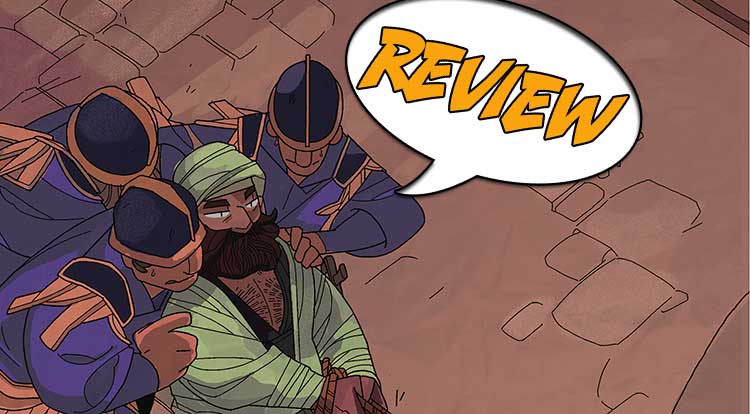 Nicolas and the gang have found most of the texts they were looking for. Getting into the Imperial Library of Constantinople was the easy part. But can they get back out again? Previously in Real Science Adventures: It is show time! Nicolas and Sofana drive the cart into the Imperial Library under the ruse that they are delivering the Nicodemus. Palatina, planted as a Library scribe, verifies their paperwork, and then is sent along with them to tend the donkey. They do manage to get the Codex that lists all the library texts – unfortunately, it comes with a librarian. After a little discreet work with a cosh to take care of said librarian, they make their way into the “heretical” section of the Library. Meanwhile, out on the street, Emir attacks the cart bearing the real Nicodemus, and gets himself captured.

Real Science Adventures #4 starts out in the Imperial Library with Nicolas, Sofana, Iskander, and Palatina loading scrolls into the cart. They have everything they came for except the star map, which Iskander realizes belatedly is in yet another section of the Library.

Out on the streets of Constantinople, the guards talk with the real priest who is escorting the real Nicodemus, who tells them about Emir’s attack, and how he struck down everyone until he was stopped by the last remaining guard, who looks like he may still be in his teens. And the young guard found a clue! Emir had a torn portion of a contract that shows he was hired by Terazin Berikos. (Berikos, we recall, is the fellow behind the library book-extortion scheme, and the guy who got Nicolas fired.) But why, wonder the guards, would Berikos hire someone to steal a shipment that was already going to be delivered to him? Very suspicious. (And supercool – Nicolas is setting up more than just a theft.)

No sooner do Nicolas and friends leave the heretical section than a few librarians arrive, wondering about the “renovations” that are going on. They decided to return to the front desk which is in a shambles at this point – misplaced paperwork. Sofana returns from “consecrating the Nicodemus,” and the head clerk bemoans being unable to find the proof of provenance. Sofana asks a little favor of one of the librarians, confessing to a weakness for cartography. He agrees to take her to the Map Room. As she wheedles her way into getting to see the map they actually need, Iskander hustles back to the front desk with the Codex. Alas, they’ve figured out it was missing. Thinking quickly, Iskander claims he has the Secundus Codex, a secret codex from the Lexicanum Council. Also secret. He can’t talk about them, and no one should mention “unscheduled renovations.” It is clever and charming how this works out.

In the meantime, Palatina has gotten the mule and cart out, and debates whether she should stick to the plan, or whether anyone needs rescuing at this point. She sees the cart with the actual Nicodemus arrive, dragging Emir behind it. This is enough of a commotion that Berikos hears it in his office. Half the Imperial Guard seems to be there, and he decides to go meet the delegation himself.

Sofana and Nicolas, with map in hand, hear Berikos on the lower level of the Library. The front desk is in chaos, and Berikos is extremely displeased. As he berates the clerks, the Captain of the Guard shows up. He has some questions for the Grand Librarian (which is to say, Berikos).

A good heist story takes a lot of set up, and still manages to pull some surprises along the way. And that is what we have here. I thought I knew what was happening, but like when watching a magician, there’s a little bit of misdirection here and there, and as things start clicking into place, it is eminently satisfying.

The art of Real Science Adventures #4 is really growing on me. The lines are clean and simple, and the choices of what to convey are top-notch. We’ve reached that point in the story, where everything is in chaos. The magician has shuffled the cards and we’re waiting to see if he can find the right one; the juggler has all the balls in the air and we hold our breaths to see if he will drop one. In the story, pieces are being set up with excellent comedic timing.

The young guard who “captured” Emir is plainly too young and inexperienced to have done so, yet he is so naïve he cannot be anything but honest. The library workers who discover the unexpected renovations are like workers anywhere, trying to figure out what to do that won’t get them into trouble. The cart passes them and speeds up as much as it dares. The front desk is a literal scattering of papers with more and more librarians, clerks, and scribes coming in to try to straighten everything out. Sofana flirts with the librarian in the map room. Everyone’s expressions are great, and the art is so lively that you can almost hear the uproar.

Real Science Adventures #4 just keeps getting better and better. I certainly hope Berikos is going to get his comeuppance; it would be so satisfying.

The threads of the web are starting to draw together in this rip-roaring adventure tale!