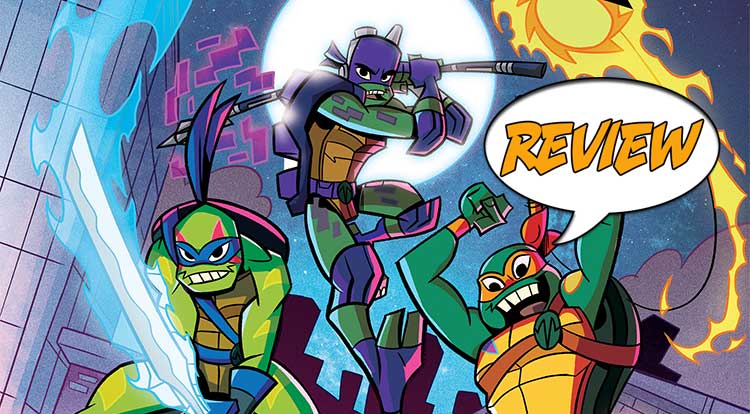 You know them, you love them, the Teenage Mutant Ninja Turtles! Straight out of your video streaming device of choice, this new series is based on the new Nickelodeon is from IDW Publishing. Let’s check it out, bro! Previously in RISE OF THE TEENAGE MUTANT NINJA TURTLES: The latest version of the TMNT to hit the screen is the brainchild of creators Andy Suriano and Ant Ward and tells of a team of turtles who have uncovered a mystical side to New York City. A sneak preview aired in July, with the series proper debut being on September 17th, 2018. It has been renewed for a second season.

In a rare pet store in New York City, Harvey Hokum has set out to launch his latest scheme to make a lot of money with a minimum of effort, but the popularity of rabbits disguised as three-horned jackalopes does not seem to be inspiring the demand he thought it would. Then he sees two small, black animals in an alley, and follows as they open a mystical portal to an unknown world.

Meanwhile, beneath New York, a familiar, yet different team of reptilian brothers are accompanied through the sewers by a young girl as they search for one of their own, who has become the victim of an experiment gone wrong. The turtles, led by team leader Raphael, finally reach their wayward brother Donatello and manage through a well thought out… nah, they get lucky and save him from one of his own technological contraptions.

But Harvey Hokum has no idea about the existence of the Turtles at this time, he has followed the two dark… magical?, creatures to their leader, the mutant nightmare maker known as Baron Draxum. Under threat and fearing for his future ability to make money, he tells the Baron that he followed the creatures to see if they were for sale. Impressed by his greed, the Baron tells him he knows of a much rarer group of four pets, just waiting to be taken by someone like himself. Then, is a great red shadow, Jarvey Hokum becomes the terrifying creature known as MAN-BUN! It isn’t long before he leads the Turtles on a chase in his attempt to trap them and get rich quick. But all goes not as he hopes, and the fight is on!

NOT YOUR DADDY’S NINJA THEMED TURTLES

This new series, Rise of the Teenage Mutant Ninja Turtles, is based on the latest animation adaptation to hit the smallish screen on Nickelodeon. Television series creators, Andy Suriano, and Ant Ward, have taken a familiar yet different take on their version of the turtles, and as licensing deals often do, it follows through to the printed comic.

This first issue is helmed by writer Matthew K. Manning (Batman Strikes, Batman/Teenage Mutant Ninja Turtles Adventures) and artist Chad Thomas (Mega Man, Noble Causes), and essentially follows the same theme as we set out by Suriano and Ward for the television series. We have the Teenage Mutant Ninja Turtles, but these are a little different than you may have seen before. The species of turtles have all been made clear, and it is a contribution to the way each of them looks. Michelangelo is a box turtle, Leonardo is a red-eared slider, Raphael is a snapping turtle, and Donatello is a soft-shelled turtle. The weapons of choice have changed slightly as well, but all still have the vital visual similarity which is needed for the concept.

So, all that said, what do I think?

Having not viewed the latest series on television, I walked into this comic blind. I was aware of the visual changes, and the new April O’Neal character, but not much beyond that. These aren’t really an issue, as there have been similar changes to the overall look and ages of the characters each time they are rebooted. In fact, the TMNT tends to be on the cutting edge of making itself as accessible to as many young fans as it can be; and this version does seem skewed for a younger audience. I have no problem handing it off to kids and know that they probably would jump right in and not be bothered by the things which seem to set off some fans.

But there is the problem, who exactly is this book aimed for? You think that would be an easy answer, but it’s not. On first glance, it looks like a no-brainer for young kids. Chad Thomas’ art is expressive and exciting, with lots of action and comedy, a natural for kids. The writing, on the other hand, is geared more toward the older audience. There are jokes that kids just might not get as jokes. Are we still in an age where making fun of hipsters is a form of comedy? I mean, the villain’s name is a natural for the style of any pun-filled TMNT series, but it’s all low hanging fruit. I realize the series may be advertised for the younger audience, but it is really meant for older readers. I get that, the concept of marketing is not foreign to me, but it just seems like there is autopilot setting that was turned on at the beginning of the issue, and left on.

BOTTOM LINE: IN DANGER OF FALLING TO THE PITFALLS OF LICENSING

Listen, this is a licensed comic. All… fine, the majority of licensed comics suffer from the same dilemma: and they are based off a property which is not owned by the publisher. This puts certain limitations on everything from style to story to the colors of the slime in the street. Yes, this is a first issue. It wants to draw in fans and wannabe fans of the cartoon. And it will do well for that, but it won’t bring droves of new fans to the franchise. All of the turtles seem to have the same personality and until they bring their unique voices to the page, it will just be a shadow of what it could be.

RISE OF THE TEENAGE MUTANT NINJA TURTLES #1 is a great little advertisement to watch the television show, but is lacking that flare which so many other TMNT titles have been able to harness. Like the cartoon or have small kids who enjoy it? Grab it. Fan of the smart comedy mixed with action and pun-filled adventures from the past lines? You might wanna wait and see how this one evolves.