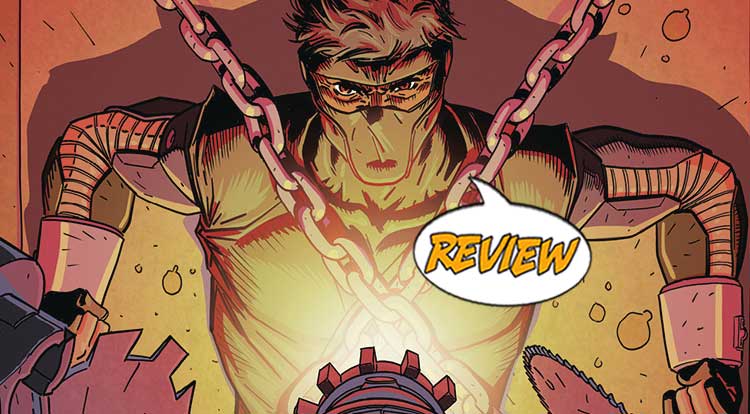 The life of the Eternal Warrior hangs in the balance and only Colin King can keep him from finally dying!  Your Major Spoilers review of Ninja-K #12 awaits! Previously in Ninja-K: With the fate of the Eternal Warrior hanging in the balance, Ninjak has tracked The Dying One – a being who reemerges in a new human body whenever they die – to a small town outside of Chernobyl.  But Colin King is about to uncover secrets more unsettling than the loss of his friend Gilad…  Abandoned in the wilds of the Russian wilderness, the world’s most dangerous super-spy must now survive against an unthinkable onslaught of science experiments from the twisted mind of his immortal foe!

Deep in what was once the Soviet Union, near the Chernobyl site, Ninjak is on the trail of the mysterious Dying One who has taken The Eternal Warrior.  Unfortunately, he also helped save the locals from radiation poisoning and allowed them to rebuild their society, meaning that they’re all ready to fight our ninja hero to defend him.  There’s a little side-track about Livewire and her attack on the United States government, which seems to have put Colin “Ninjak” King under a microscope which actually feels out-of-place and overly expositional to me, but once he manages to get the trail of the lost Eternal Warrior, things get better.  Or possibly worse, since Gilad’s immortal body is now possessed by The Dying One.  And using the martial skills of his friend, he’s going to kill Ninjak, unless Ninjak is willing to kill him (and by extension, The Eternal Warrior) first!

KIND OF DARK AND MUDDY

This is the story of a ninja, so naturally it would feature a lot of darkness and shadows and such, but this issue’s art is remarkably dark and the colors are very muddy, which combines with the intentional scratchiness of de la Torre’s art in ways that are both unattractive and make for hard-to-follow storytelling.  Add in the fact that Colin starts the story in mid-sentence and the story jumps back and forth in time without a clear explanation more than once, and it’s a frustrating issue to read.  I don’t know about Livewire’s story, but devoting as much discussion to it as this issue did was distracting, and the reveal of the villain in Gilad’s body required more than one read to actually understand.  The final page cliffhanger is also a bit confusing, and after multiple reads, I’m still not entirely sure of what’s been going on.

There’s a lot of interesting stuff in this comic, and the idea of a modern-day ninja in the middle of international conflict is a good one with a lot of possibilities.  Ninja-K #12 isn’t entirely sunk by muddy art and a story that devoted its attention to things I didn’t understand while ignoring something I wish would have gotten more attention, earning 2.5 out of 5 stars overall.  There are things to like here, but the overall execution makes it difficult to get there.

Feels overly expositional without explaining a lot, combining with difficult-to-read art to make for a frustrating issue.