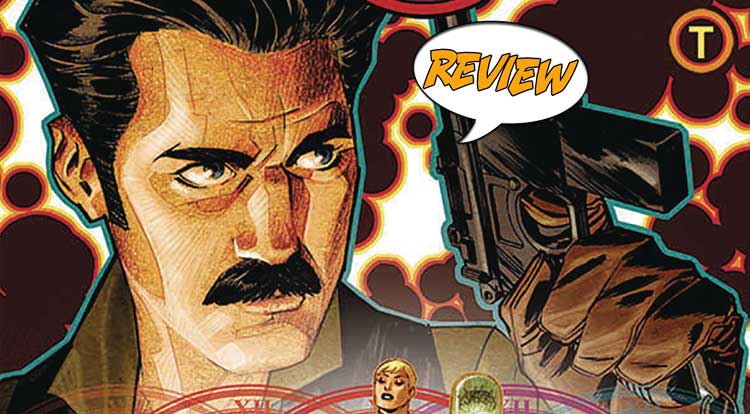 He formulated the theory of relativity, but before that… he traveled in time and fought evil fanatics who wanted to steal his own brain?  Your Major Spoilers review of Albert Einstein: Time Mason #1 awaits! Previously in Albert Einstein: Time Mason: He’s got the mind, the might, and the mustache!  Albert Einstein leads a team of geniuses called the Time Masons in a battle to protect the integrity of our timeline.  But when a new threat puts the past, present, and future in peril, it’s up to him and a squad of epic historical figures to save the universe before the clock runs out.  Get ready for an Einstein you never imagined in the greatest time-travel adventure series history has never seen!

In New Jersey, 2214, Albert Einstein is caught in a firefight with a sect of Sci-Oscalists who have stolen a particular treasure from the past and caused a time paradox.  That’s a sentence that you don’t get to write every day.  In any case, their battle rages quickly and Einstein discovers that his opponents are led by a little person/mad scientist called Dr. Rupret Stiltzkin and he’s using the item that he stole to empower a time-robot with which he will conquer all of the universe in all times!  (Insert “Bwaaa ha haaa” evil laugh here.)  Einstein outsmarts him, overpowers his henchman (a leather-clad N*zi woman with some mad kung fu skills) and destroys the robot with his own knowledge of physics, then steals back the item and returns home to 1937.

And did I mention that the stolen Maguffin is actually his own preserved brain?

I have to admit, there are a lot of really fun bits of dialogue in this comic, especially in the ways they tie science and physics into Albert’s solutions for the giant robot and such, and I really enjoy the text piece at the end of the issue explaining how real Einstein’s real brain was in fact purloined by people who wanted to study it.  There’s something really entertaining about the whole Indiana Jones “professor-as-adventurer” archetype that Albert Einstein: Time Mason #1 taps into well and I really enjoy the art.  It somehow reminds me of the comics of the late 80s/early 90s independent boom, with echoes of the art of Dean Motter in its bold lines.  I really enjoy the fact that you can see the Albert Einstein that would become iconic in this character’s face and the action sequences are pretty excellent throughout.  On occasion, the anatomy gets a bit more stretch-and-squash than I prefer, but even that isn’t a deal-breaker.  There have been a lot of these historical fictions lately (my personal favorite is probably ‘Five Fists of Science’) and I wasn’t entirely sure I was excited about another one, but the combination of art and story here have made for a comic with style and personality.

BOTTOM LINE: THIS IS A FUN COMIC

Combining real history with over-the-top adventure tropes, Albert Einstein: Time Mason #1 makes for a rollicking issue of comics with some strong art and an entertaining story, earning a better-than-average 4 out of 5 stars overall.  If nothing else, it’s fun to see the amount of work and research that has gone into making this book as accurate as possible to the real-world Albert Einstein, and it’s a real hoot to see a young, roguish Einstein kicking butt in an action-adventure story.

The "historical figure as action hero" genre is a crowded one, but this is a likeable book with some clever writing and crisp art.