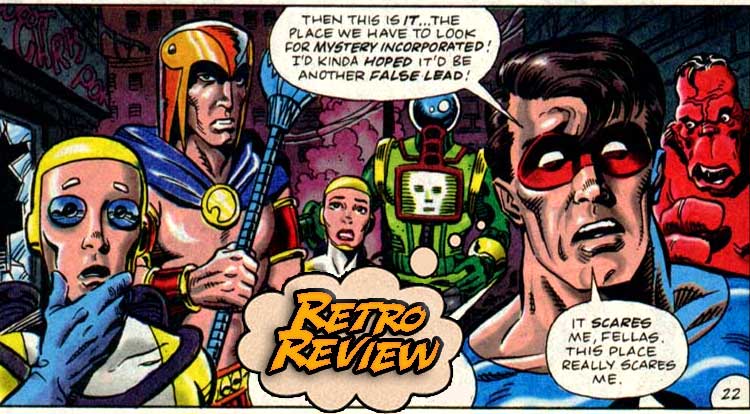 This month marks the 25th Anniversary of one of the most harrowing unresolved cliffhangers in comic book history.  Your Major Spoilers (Retro) Review of Retro Review: 1963 #6: The Tomorrow Syndicate awaits! Previously in 1963: After the seven Image founders left Marvel Comics to form their own imprint, things really began to explode for Image.  Building their own universes, the founders actually managed to stitch together a shared universe of their own and began creating a backstory for that world, including retconning in a whole heroic history for that world.  When Alan Moore brought his brand of madness to image, it was as a loving tribute to Silver Age Comics and Marvel in particular, establishing a whole world of characters in the year 1963.  Mystery, Incorporated took the elements of the classic Fantastic Four, The Fury had bits and pieces of Spider-Man and Daredevil, U.S.A. had overtones of Captain America, The N-Man had a melange of Hulk elements…   They even had an ersatz Thor in Horus the Lord of Light, but it wasn’t until this final issue, 1963 #6,  that we got our pseudo-Avengers. From their headquarters inside the heads of Mount Rushmore, the heroes come together to figure out what happened to their colleagues in Mystery, Incorporated (who were captured one-by-one by a masked enemy, as seen in 1963 #1.)  Tracing a specific frequency of radiation, the team (featuring the aforementioned Horus, N-Man and U.S.A. along with the sorta-kinda Iron Man pastiche Hypernaut and the team of Infra-Man and Infra-Girl, who aren’t Ant-Man and the Wasp at all, you guys) sets off for New York.  Beneath the streets, they find a sprawling complex that turns out to be the long-rumored hidden headquarters: The Mystery Mile! Perhaps the best part of the entire 1963 crossover is the art, with 1963 #6 showcasing Veitch and Simpson’s best Kirby/Steranko/dash of Ditko riffs and really nailing the whole aesthetic.  Given that they’re moving through strange complexes full of machinery, it’s impressive to see the work, but when they discover a strange spacio-temporal portal, that’s where the Silver Age Marvel really kicks in. Traveling through time and space, the heroes of the Tomorrow Syndicate encounter an earlier team (which honestly feels a little bit more like a JLA/JSA crossover homage, but I’m not spitting hairs) consisting of their WWII predecessors, including a younger version of U.S.A. himself!  They end up in the Lobby of Alternity (a concept that would later pop up in a similar form during his ‘America’s Best Comics’ run over for Wildstorm a few years later) and follow the Mystery Inc. team’s traces through the multiverse, encountering their own evil duplicates on a Nazi-world, a whole page of references to the Church of the Sub-Genius and visual references to other independent comics like Deadface, Cerebus, Mister Monster and more.  (Veitch’s ‘Maximortal’, Simpson’s ‘Bizarre Heroes’ and Image founder Jim Valentino’s ‘normalman’ are also seen.  Who says it’s not the Immortal Image Age of Self-Promotion, Faithful Spoilerites?)  The last world seems the most terrible of all, though, as they transport through to find… reality. The alteration to the coloring is a subtle touch that sadly didn’t really translate well, thanks to the paper quality used by ’93 Image, but it’s clear from the heroes reactions to the sights and smells that this particular version of New York is something different.  U.S.A. even admits to being afraid for perhaps the first time, as they set out to find their friends.  As for the fate of Mystery, Inc., we finally catch up with the masked man who reveals his face… It’s SHAFT!  (Shut you mouth!  Just talkin’ ’bout Shaft, is all.)  The leader of Youngblood clearly has something up his sleeve, and his references to sundering worlds make me wonder if he’s not an evil version of the one from Rob Liefeld’s premiere super-team.  Then again, given his wild swings of personality in the canon universe, I can’t really tell you if such nefarious words would really be out of scope or not.  Still, as this cliffhanger hits the quarter-century, I regret that we didn’t get the big clash of 1963 versus 1993 at a time when it would have meant something.  With the shattering of the shared Image Universe (Liefeld’s characters have come and gone three or four times, Wildstorm was sold to DC and I haven’t seen anything from Jim Valentino in a couple of years), the followup really probably can’t happen anymore, leaving 1963 #6: The Tomorrow Syndicate as likely forever unfinished, but unfortunately so, given it’s strong art and clever story, earning 3.5 out of 5 stars overall.  Sometimes I suspect that I’m the only one who even remembers this series or wonders how it would have ended, but at the very least, now you can all share my what-if-misery.

A clever story full of wild, universe-spanning nonsense in the Silver Age tradition... It's a shame it was never finished.