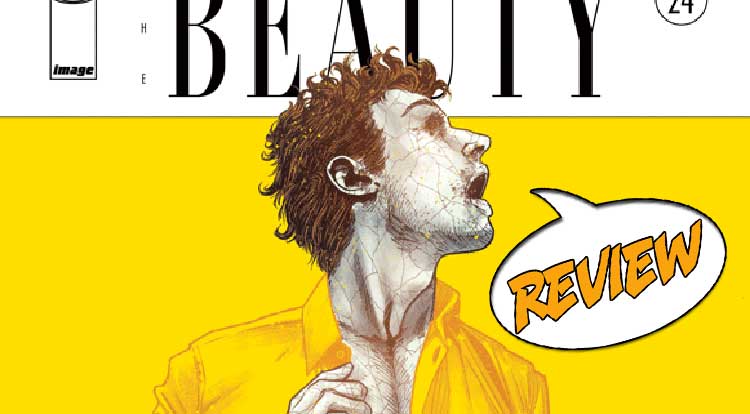 It’s the week before Christmas, and the only presents Detectives Vaughan and Foster are getting are seven torched corpses in The Beauty #24 from Image Comics. Previously in The Beauty: In the wake of the sexually transmitted disease known as The Beauty, more than half of America is infected with a disease that everyone wants!  But only now is the price becoming apparent, and in the face of that, Detectives Vaughan and Foster have to deal with not only Christmas present buying but also seven badly toasted corpses.

Up until I’d read this issue, I’d never heard of The Beauty.  It’s never too late to change, of course, and change, and the effects of it are all over this series.  The sexually transmitted disease known colloquially as The Beauty has infected more than half of all Americans.  And it seems to be the STD that everyone wants – those infected burn fat, get the chiseled jaw they’ve always dreamed of, have the sort of healthy glow that makes those of us camped out in McDonald’s sick with envy, and have more abdominal muscles than God.  Overall, it seems like a great disease to get.

Did anyone mention though, that the victims eventually burst into flame and die screaming?

Anyway, in the wake of this rather delightful slow-motion apocalypse, Detectives Vaughn (known as Red to her friends) and her platonic partner Foster are assigned to deal with crimes involving Beauties.  In The Beauty #24, they’re dealing with the gradual pile-up of cases that while they do involve Beauties, only tangentially relate to them.  And all in the lead up to Christmas.  When seven torched bodies appear in an unmarked shipping container, all thoughts of the jolly fat man in the red suit go out the window, and the chase is afoot.

The Beauty #24 is a fantastic issue.  Not only is the overall premise of the series delightfully grim and hilarious, but the writing and characterization of this particular issue are razor sharp and all the more entertaining for it.  Most of it is the sort of humdrum existence real police detectives no doubt deal with for most of their day.  Paperwork, caseload management, dealing with the scum of the earth, and very occasionally, murder victims en masse.  The interplay between Vaughan and Foster is great – there’s a season one and two X-Files vibe going on between them, with snappy banter and commentary spilling across the page.  Indeed, there’s a great scene where the writing and the art come together spectacularly when the two leads spend a page eating tacos in the street while waiting to meet an informant.  Six parallel panels, with just the characters facial expressions giving way to hoots of delight at how good those tacos are.  It’s goddamned brilliant.

Further to that, there’s a nice callback to an earlier scene in the book where Vaughan and Foster debate the merits of buying each other presents.  It’s counterpointed later when Vaughan introduces Foster to her previous partner, who immediately undercuts Foster’s disinterest in receiving a present by giving Vaughan her Christmas present.  It’s all very nicely done and gives an indication of the care the writers have for their story and their characters.

TOUCHED BY THE FINGER OF GOD

In a book like The Beauty #24, the artwork has to be of a standard higher than most books.  In an interview, both creators commented about how hard it is to illustrate a book like this with people who meet modern day standards of beauty.  Thomas Nachlik steps up in a big way, populating the issue with strongly drawn, expressive characters.  There’s a sense through the art that these are real people, with real emotions.  Sketchily drawn characters wouldn’t cut it in a book like The Beauty #24, and thankfully, they are nowhere to be seen.  Adding to the experience, the panels are laid out in such a way that the action flows throughout the story.

The overall premise of The Beauty is compelling – if everyone is beautiful, where is the real attraction.  You don’t see much of that in The Beauty #24 (though warning, with the full frontal male nudity on one page, you see much more of something else) but you do get really solid characterization, which elevates the book and makes it hugely entertaining.  With a solid leading pair in Vaughan and Foster, you have the yin and yang of police partnerships that covers all bases while creating people you can root for when the bullets start flying.  As I said at the start, I came late to this series – but now that I’m here, I’m in for the long haul.

With a solid leading pair in Vaughan and Foster, you have the yin and yang of police partnerships that covers all bases while creating people you can root for when the bullets start flying.