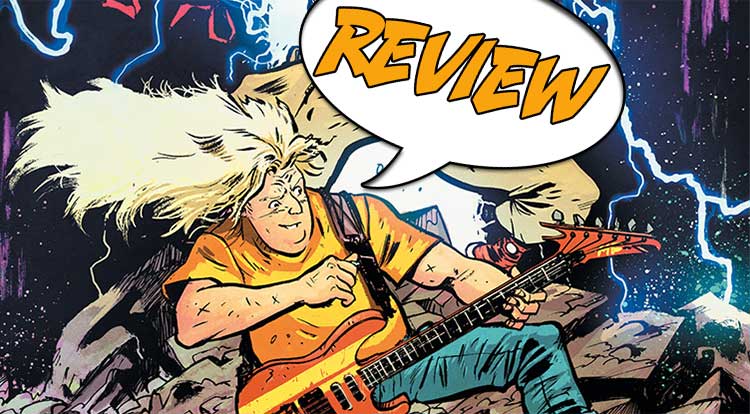 A heavy metal powered, monster fighting, ode to the dreams of headbangers everywhere! While Jake shreds on his guitar, Murder Falcon shreds evil! A mega-total trip, Murder Falcon #1 is out now from Image Comics. Previously in MURDER FALCON: Jake was in a band of some note, Brooticus, until something happened that made it all come crashing down around him. Once a great guitarist with a bright future, he has pushed everyone away, wallowing in his own pity.

BATTLING MONSTERS AT THE SPEED OF SHRED!

A giant monster is tearing up the downtown area, threatening all those around as it cuts a path of destruction no person nor tank can halt. As the people of the city shelter in place, fear in their eyes, a blue van driven by a young man with long golden tresses arrives. He unpacks his guitar and unleashes not only the power of metal, but the Murder Falcon! The notes fly from his fingers with a rapidity that amazes those around him, and fuels the anthropomorphic cyborg battler master as he prepares to pound the monster into a buddle of red goo. The battle is engaged!

But it wasn’t always like this. Just weeks earlier Jake was on the skids. He had lost his band, his van, and possibly something very dear to him. He had given up on the music, despite the calls of fans to return to the stage. Something in him had died, and the music gave him no pleasure, it reminded him only of pain.

Arriving at his apartment late one night, he spies the broken guitar in the corner of the room, a reminder of his loss. But suddenly, a hideous monster appears and attacks! As crazy as it sounds, Jake takes the broken ax in an attempt to defend himself, only to have a cascade of lighting crash through his sunroof! He then finds himself holding a reformed instrument and being protected by a large bird-man with a metal cyborg arm! The bird-man, who declares his name is Murder Falcon, calls for Jake to play because his notes give the mysterious fighter the power to combat the evil. The more intense his music, the more powerfully and skillfully his defender fights.

The monsters are invading his world, but Jake has a past. Can he learn to deal with his loss and use the power of heavy metal to save every one of us?

A UNIQUE COMBO OF METAL AND MAYHEM

First up, I really did not expect to like this title as much as I did. The title alone made me go, WHA? But I picked it up anyway, and after taking a little time with it, it really was something cool. I’m a metal head from way back, bands like Anthrax, Helloween, Overkill, Black Flag, Iron Maiden and others fueled my early youth and musical influence as a bass player. This title took me right back to those days of getting into the music and feeling the notes just sweep you up with a feeling that you can do anything.

Murder Falcon creator Daniel Warren Johnson (Extremity, Space-Mullet!) goes out on the proverbial limb with a bizarre tale of music and lost, and the journey to finding the music again. Seriously, I first looked at it and I completely dismissed it as one of those titles that does some far out story that makes no sense and never bothers to follow through. Luckily, I tried this anyway. Good night I am glad I did.

The story is deceptively simple. A talented musician sufferers a loss and gives up on his music and himself. It is only when he is forced to reach deep down and rediscover his passion does he begin to reach his full potential. Now, take that theme, set it to some Slayer style guitar work, throw in monsters and a warrior bird like you used to draw on the back of your high school math notebook, and you start to get the feeling of Murder Falcon. It is fun and oddly nostalgic, but there is a sense that something deeper is happening just under the surface.

Johnson’s artwork is a pleasure. It is detailed, scratchy and emotional. He has some great designs, and a done of detail. I enjoyed it, and the colors by Mike Spicer (Horizon, Sons of Anarchy) add to the overall pleasurable experience.

Like me, Murder Falcon may be one of those quirky looking books put out by Image that you just decide to gloss over on your way to pick up the latest hero-driven-multi-crossover being churned out, don’t. Pick it up, give it a read, and see if it wins you over like it did me.