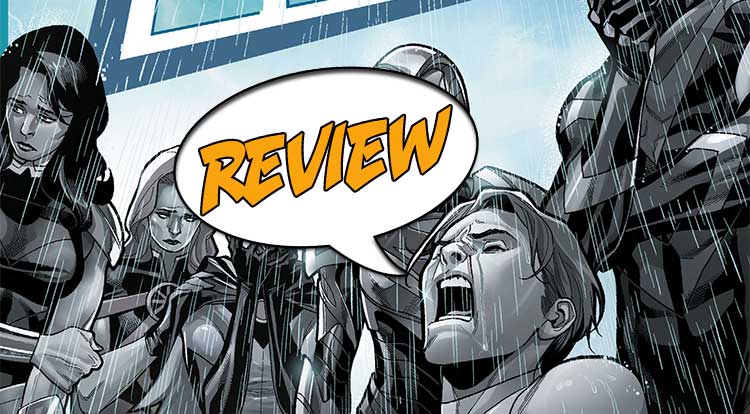 The Titans respond to a shocking loss by pushing themselves to help someone in need. But is are there times that being a superhero just isn’t enough? Titans #27 from DC Comics is in stores now. Previously in TITANS: The Titans have been quite busy as of late. They have battled classic fantasy characters from the mind of a writer, they have faced down the Blood Cult, giant robots and even been involved in a Mojo like situation. But can any of that compare to what they are about to face?

WHEN YOU LEARN TO LIVE…

The Titans have just learned their leader, Dick Grayson aka Nightwing, has been shot in the head while working with the Batman in Gotham City. The prognosis is not good and the team seems to be in an introspective moment. While some express an odd level of detachment upon hearing the news, Garfield Logan aka Beast Boy, takes the opportunity to remind his fellow Titans about someone that they promised to help but have not taken steps to do so. Tyler Baines, who was involved with saving the world in the Sugar Hill event, slipped into a coma shortly afterward, and has been at the Mercy Crest Hospital in Washington, D.C. Gar feels it is time they fulfilled their promise.

Back at the Titan headquarters, Donna Troy is dealing with the news of Dick’s injury in her own way. Apparently, she’s a straight shot type of lady, but Raven tells her that it won’t really help. When Donna tells Raven to use her powers to see how she really feels, she is reminded her old friend has lost her emotions when she lost her soul self. The two old friends comfort each other to the best of their abilities. Meanwhile, other members of the team begin to wonder if, without Nightwing, there is even a team to be a member of. But it is Beast Boy who gives them a focus and demands they help the young Tyler Baines, no matter what.

The Titans have been a staple in the DC Universe for decades, as far back as their 1964 debut in The Brave and The Bold #54. It became the first DC Comic title to take the side-kicks from under the wings of their mentors and give them a full life. It also has been a title that has been through multiple incarnations, from the Haney/Cardy era in the seventies, the legendary Wolfman/Perez run in the eighties, multiple teams after that. The team has had spin-offs and spotlight series, and is overall one of the most iconic titles in the DC Comics publishing line. They moved far beyond the original concept of a Justice League Junior and have become full entities on their own.

Writer Dan Abnett (Aquaman, The Legion) brings his own style of writing to the Titans, and has been the leader of this most recent volume. His tales normally have a touch of fantasy underlying them, but for this particular issue, he decides to tug at the heart a little more. Beast Boy takes a more central stage and you are reminded, in a well-done way, that he is by far the least emotionally developed team member. Life has always been a game to Logan, and even when he has been dealt a harsh hand by various threats to his life and changes to his powers, he always managed to find a way to make a joke and deal with it. Even when he was dealt the double blow of betrayal and the loss of his first true love years ago, he bounced back and became the Pan of the group. These latest events have taken more of a toll on him, as he begins to question what good they really do if they can’t help those who really need it. Similarly, we get a weary Donna Troy, who herself has been dead on more than one occasion and brought back (not sure how that works in the current continuity), has a very jaded view on events. She seems to have no joy, after the loss of another teammate due to Heroes in Crisis, you feel she is emotionally shutting herself down. Overall Abnett gives us an issue which attempts to be very emotional and succeeds for the most part, but it feels like there was something slightly off. While there is some concern for Dick Grayson, no mention is made of the other loss (I won’t spoil it for this issue or those of you who have not read Heroes in Crisis #1, and it gives it an intrusive feel. Hopefully, we will get some more heartfelt remembrances in a later issue. But, to quote Donna in this issue, “People like us, we… we come back from the dead all the time. He’ll be fine.” I almost feel like that is a commentary on the whole storyline outside of this book.

The artwork by penciler Brent Peeples (New Super-Man & the Justice League of China, Star TerkGreen Lantern) & inker (Superwoman, Green Lanterns) has a nice look to it. They have a good chemistry of styles and complement each other well. The best scenes come late in the issue, but we have some nice emotional pieces in regards to Beast Boy and Nat Irons. Good solid work, keeping with the tradition of the title.

BOTTOM LINE: A WELL DONE ISSUE, BUT IT FEELS A LITTLE LIKE FILLER

This is a good issue that falls short of being great. One thing the Titans stories have always been able to convey is emotion. Much of that is due to the writers understanding the character’s status as young people. You could always imagine Dick, Donna, and the rest going out to a club after a mission, to just living their lives from the other side of the mask. This issue seems like the team is preparing to hit its proverbial middle-age. You start losing friends you never expected to lose, and you become more jaded about the certainty of making it through the next day. We got this feeling years ago during the 1999 launch of Titans and it is starting to get that feeling again.

TITANS #27 is a more subdued issue than those Dan Abnett has been delivering us, as we take a moment to tie up some loose ends and establish a slightly new status quo. It might be a little confusing for the first time reader, and the attempt for the feels seems a little forced.

Not a lot of action, but plenty of life. Hopefully, a small detour leading to a return to the action-filled previous storylines.