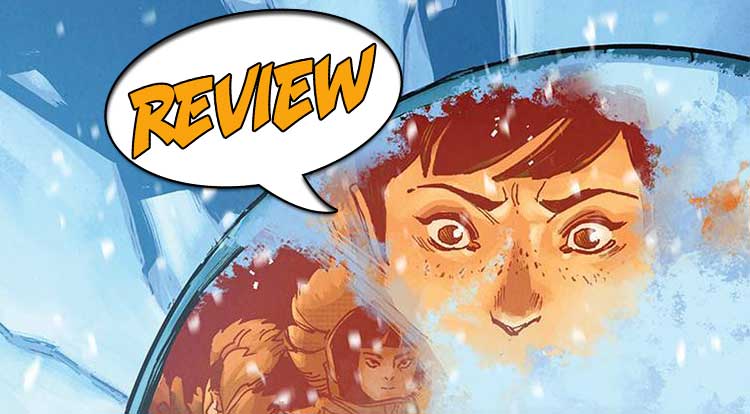 Sam and Alea make a deal – information in exchange for the projector. The Council makes a decision on how to deal with the ice burying the Outpost. And the cats may be onto something… Previously in Outpost Zero: An enormous storm cell hit the outpost and buried it in ice and snow. The Council debates how best to get out from under this before the dome gives way. Alea follows Sam around, trying to get him to talk about Steven. She also lets on to Sam’s mother that she knows he was in the airlock. And later, sneaking into Sam’s room, she finds the holographic projector.

Outpost Zero #4 is more than a mystery; it is also a story about growing up and making decisions on your own. We begin by a locked door with Sam entering a code which is now invalid. His adoptive mother, Karen, catches him there, and is concerned, if not outright angry. Alea knows that Sam was at the airlock when Steven went outside. If word of this gets out, Sam is at risk. Sam is confident that Alea won’t tell, and he wants to handle this. On his own. After walking back home with him, Karen agrees. Sam goes up to his room to find the projector gone, and a note from Alea to say she has it, and she won’t tell. Life just doesn’t get easier.

Meeting with Planning Team, Jann makes the argument that Discovery’s Teams solution to the ice problem is the only way to save them, even if the Chief doesn’t like their plan.

Alea and Sam talk. Sam accuses her, like Mitchell, of barging into other people’s lives, doing things without thinking. Alea asks about the projector. She’s never heard of anything like it, and doesn’t think anyone else has. There’s only the one partial recording on it. Sam tried to connect, but the network was severed; he believes deliberately sabotaged, as though someone wanted all of their history to be hidden and forgotten. Alea also wants to know what is behind the locked doors, and Sam tells her it’s mainly scrap – metal, electronics, parts. And cats. Alea finally offers to give the projector back, if Sam tells her about Steven and the airlock.

There’s a scene with Lyss, Alea, and Mitchell playing dodgeball and talking. Mitchell’s sister, Maddie, is mentioned again. We have not yet seen her in this series. We also find out that Alea has a younger sister, Ella, and that her father tells dad jokes. The character development in Outpost Zero is well paced, doling tasty nuggets out bit by bit.

Jann and Karen, who were butting heads in the last issue, have a discussion. Karen asks Jann if she trusts Alea. She also gives Jann the approval for her plan, and lets on that going over her head to the Council would not have worked. Sam and Alea meet. As it happened, Sam was in the airlock when Steven came there. But he had some last words – that it was up to Sam and Alea to “save them.” He said something else cryptic as well.

As we see the closing scenes of the various teams getting together, preparing for their part in the plan to cut through the ice, we also see more of the cats. They’ve been around throughout this issue, but now they’re more present, purposefully making their way through areas of rubble and junk, gathering in a place by a large, vaguely human-shaped, shadow.

YOUNG PEOPLE AT A CROSSROADS

Feelings run deep in Outpost Zero #4, and we see them all on display. Sam and Alea are the centerpiece of this issue, and there’s a lot going on with them. Sam clearly has his struggles, and we can see both doubt and resolution in him as he wants to deal with his issues on his own. Karen is working through letting people have a chance to prove themselves – both Sam and Jann – which is a significant part of both motherhood and leadership.

Again, we have contrasts. As dark as it is in the deep sections of Outpost Zero, the sky still works, and the “outdoors” is sunny and bright. It is a welcome relief to see Lyss, Alea, and Mitchell having fun for a while. We see Ella only briefly, but enough that she comes across as the younger sister whose family is out to embarrass her.

It gets intense as well, especially as the teams are getting ready to tackle the ice. There is no doubt this is a dangerous plan. Life is on the edge here. And closing with the cats is very intriguing. They have the run of Outpost Zero, and can easily get to places where people might not. What has brought them all together?

One of the things that I really like about Outpost Zero #4 is that while I understand many of the characters, and why they do things we see them do, there are surprises and mysteries around every corner. This is not just a coming of age story or a straight-up survival story. It feels like we’re on the cusp of something even more.

This is not just a coming of age story or a straight-up survival story. It feels like we’re on the cusp of something even more.